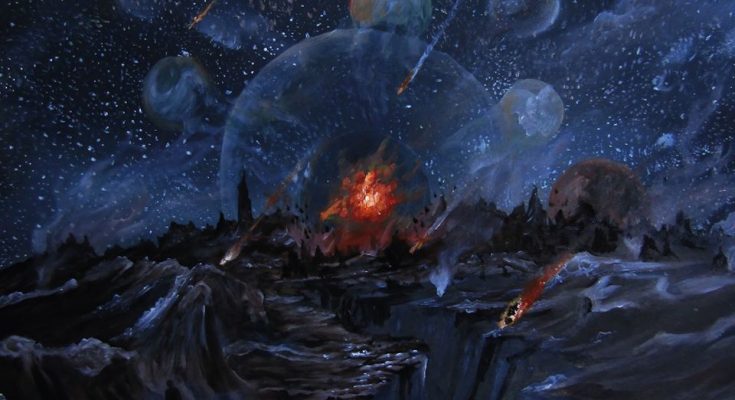 Cosmic death metal bands often emphasize Lovecraftian themes and many other subjects such as demonic entities, time-traveling and extra-terrestrial horror. Almost two decades ago sci-fi death metal permeated through the sub-genre of death metal. Here are some bands that shaped their craft to a proper example of cosmic death metal : Atheist, Timeghoul, Nocturnus and Dark Millennium. While these complicated themes of Lovecraftian mythos created a vast imaginary world of horror, it has also laid heavy influences lyrically and musically on the new wave of old school death metal bands. This resulted in a modern collective of bands that features Blood Incantation, Outer Heaven, Sulphur Aeon, Warp Chamber, etc. Through this constant and expanding list, I stumbled upon the sophomore release of the neophyte, Italian death metal band known as Cosmic Putrefaction. Formed by sole member Gabriele Gramaglia, it explores for the second time the musical aspects of cosmic dread. Unlike his other solo project bands, the multi-musician’s work here is clearly related to death metal. G.G. endeavors to build on the momentum that he previously achieved on the debut album ‘At the Threshold of the Greatest Chasms‘.

However, his second outing, ‘The Horizons towards Which Splendors Wither’, is seemingly more focused on uncanny chaos which lurks in interdimensional galaxies. G.G. displays his technical skills and while he had already proven his motif, the sophomore merges the facets of brutal death metal. The opening track, ‘Between Awe and Fear upon the Burst of the Ominous Star‘, sets the tone for the album. Cosmic Putrefaction might be similar to bands like Tomb Mold, but the band is somewhere in between the cosmic orbits of Tomb Mold‘s album, ‘Manor of Infinite Forms’ and the semi-progression of Blood Incantation. In other, words G.G.’s sonic craft orbits near these two bands. The songs shift at a rapid pace, given the blast beats and cavernous growl effects that provide a perfect sci-fi atmosphere.

Within an album that spins at thirty-four minutes, you are likely to experience the jarring guitar riffs and dissonance through which G.G. conveys the subtle qualities of sci-fi death metal. On the second track, ‘This Landscapes Sublimates Oblivion to Obliteration‘, this is executed without any constraints. The heavy riffs and the violent ebullition of the tremolos give a brutal aspect of death metal. Technically, G.G. presents an array of dissonance and the riffs are often jarringly razor-sharp. While the vocals often incorporate gurgles, deep growls and high pitched screams, the drums are operated at full capacity. The loud cacophony of the spectral voices contrasts with the blast beats. However, there are sudden moments when the musical breakdowns showcase the technical prowess of the drums.

‘The Glooming Murk of His Telluric Shrieks‘ almost feels identical in direction as the song texture is filled by tremolo pickings and the drums suddenly shift into a fast-paced tempo. Almost midway through the album and I have already been experiencing unsettling moments of unhinged tempos. G.G. has constructed a firm musical template. For example, there is a notable transition from slow to ultra-blast beats. ‘The Horizons towards Which Splendors Wither‘ is heavily laden with organic songs. The only thing which lacks, is the progressive technical touches of the guitar. Most of the songs contain many slow moments and it clearly shows that G.G. decided to delve deep into the cosmic spectrum of death metal.

The longest cut on the sophomore is the eight minute, ‘Abysmal Resonance Projection‘, which is structured upon a range of dissonance and bulldozing brutal riffs. The double bass and the spectral vocals soon contrast with the ambient soundscapes of horror. Here the composer adds an atmospheric texture to the song that perfectly fits with the conceptual theme of the album cover. The Horizons Towards Which Splendors Wither’ might not come close to Blood Incantation’s latest works, but the composer further exhibits his own sonic motives. Other tracks like ‘The Arcane Soothsayer Carefully Sculpted His Demise‘ is brought by the efficacies of old school death metal. The technical prowess, including the drum technique, is combined with the elements of black metal, which are encapsulated in the song structure.

The ambient atmosphere creates a horrific experience on the final track, ‘Utterance of the Fall of Man‘ and carries the listener into deep space. The music perfectly conjures the forlorn galaxies of dead stars and that’s what G.G. tends to conduct through this sophomore. Visually, ‘The Horizons towards Which Splendor Wither‘ explores these cosmic, panoramic aspects. This is definitely a new chapter in the expanding catalog of cosmic death metal that combines brutality, alienation, and deep atmospheric sci-fi themes.