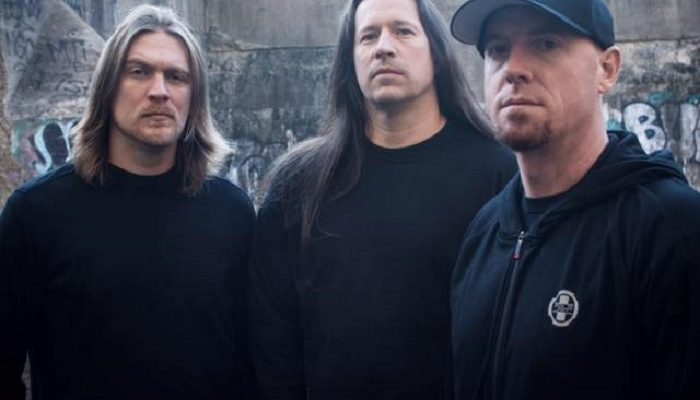 On the 8th of November, Dying Fetus played at JC De Klinker in Aarschot together with Disentomb, Beyond Creation and Psycroptic. Tour manager Paul McGuire (ex Cerebral Bore) gave me the chance to get on the tour bus and have a short chat with Dying Fetus guitarist John Gallagher. Trying my very best to keep it together while interviewing the guitarist from my favorite death metal band in the world, we talked about being on tour to promote their newest album ‘Wrong One To Fuck With’.

How are you doing today, John?
I’m doing well, just a bit tired since we’ve been on the road for a month already. Playing pretty much everyday gets to be a bit tiring, but we’re still here.

Still enjoying it? Not too exhausted?
No, we’re in decent conditions. We have a decent bus, it’s just a lot of waiting around. That’s not necessarily hard physically, it’s sometimes more mentally draining to be away from home. But it’s not like we’re doing back breaking work or building houses here. Honestly, there’s people that work harder jobs than us, so I don’t wanna act like we’re some kind of superheroes here. But the traveling takes its toll more than anything.

When you’re on tour you don’t see a lot of the places you travel to, right?
True, it’s optional. If you want to go out and get an uber, taxi or a train and you wanna see the city, you can do that. But most of the times we choose just to stay at the venue and relax, save our energy for the performance, ’cause that’s the most important part of this. Every now and then we’ll explore the city.

Two days ago you played in London, and according to the tour dates you had a day off yesterday.
Yeah, so yesterday we just basically sat here in the same spot. It was kind of a boring day off. It’s good for the vocals though. I think we only had two days off from this tour, very minimal. Any day off is good for the vocals. You get to shut up and not bark like a dog for an hour and half.

You’re on tour to promote the new album: Wrong One To Fuck With.
It had our highest first week sales of all time, even in this age of internet stealing. So we’re still fairing pretty well, based on our past album sales. Pretty cool for us, we’ve been having this killer tour. It’s been 6 or 7 sold out shows I think, very packed every night, people going crazy.  One thing I’m noticing is that they like our new songs. I know a lot of older death metal bands who are still kind of relying on their same old-ass songs from ’91, I won’t mention names. But for us, we’re happy with the fact that people are appreciating the new stuff and they’re singing along to our brand new material. That’s a sign of growth and stability and we’re happy with that.

If I may be honest, I’m really digging the new album too!
It took us some time to get together. It takes time to create good work sometimes, rather than slapping something together, just to meet some deadine to make some record label guy happy . I’m not into that, we’re here to make ourselves happy, not the record label.

Two years ago you played Fortarock in the Netherlands. There was some doctor on Twitter who said your bandname was offensive and it should be removed from the posters.
He might have been doing that as a ploy to gain attention for his own practice. Maybe he was just saying that so he could get his name in the paper. Saying something like that makes him this ‘noble guy’. Maybe that’s what it was all about, ’cause does he really give a fuck? I don’t know, that’s my take on it. Or maybe he did really get offended but if you think about it, it’s not that offensive of the name, you know. Honestly, there’s way worse band names out there.

How do you experience Belgium on tour?
Belgium’s nice, the people are friendly, the beer is great. We’ve always had great shows here. There was a crossover here in Belgium, with hardcore and death metal. That was definitely good for us when we first started coming here. I don’t remember anything bad. I do remember we played Ghent in the late 90s and the PA went out. We couldn’t do the vocals, just instruments. That was the first time we’d ever played in Belgium. But it isn’t a bad memory, ’cause the fans still appreciated that we kept on playing even though the PA was busted.

Do you have a message for the Belgian fans?
Come out, hang out with us. And if you’re gonna steal music, come out and buy a shirt, support the bands in some way if you enjoy them. That way we can carry on with our craft. Keep drinking that good Belgian beer, don’t get fat.

You can read the review of the show here.