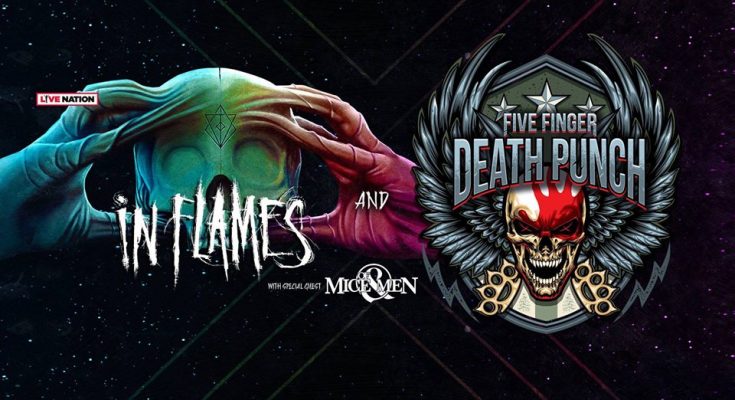 Two mastodons in the heavy metal community joined forces and embarked on a double headliner tour through Europe. We're talking here about the Swedish melodic (death) metal giants In Flames and the American groovy heavy metal misfits of Five Finger Death Punch... Through Live Nation they kicked off their tour at a sold-out Hartwall Arena in Helsinki, Finland. Being the capital country of metal in the world, they definitely were up for quite a task to prove their worth!

Sadly we missed support band Of Mice & Men due to some problems along the road. But we're pretty sure this alternative metal/metalcore outfit from Orange County, California killed it on stage and warmed up the cold bones of the Fins that already made it to the venue early. Be sure to check these dudes out if you're up for a whole lot of melody and catchy! 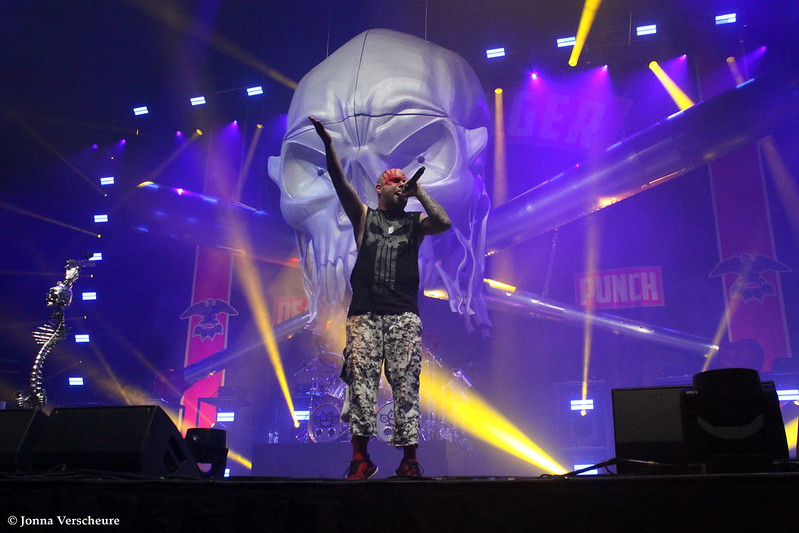 First headliner of the night was Five Finger Death Punch (***1/2). The band has been soaring to great heights with their infectious, catchy and groovy modern heavy metal songs and gathering more and more members to their army of crazy fans. In the beginning of this year's Summer, shit went a little bit wrong on the Dutch stop of their European tour and Ivan Moody temporarily left the band to go in rehab. In other words: this was the comeback in Europe of 5FDP with Ivan back, jumping around with a mic in his hand. They had something to prove here and they definitely did. Their show was brimming with positivity, energy and a big "fuck you" to all the haters. The curtain dropped, a huge skull with baseball bats with drummer Jeremy Spencer sitting under it was revealed and they kicked off with one of their strongest hits Lift Me Up. The atmosphere and tone of the rest of the gig got set. 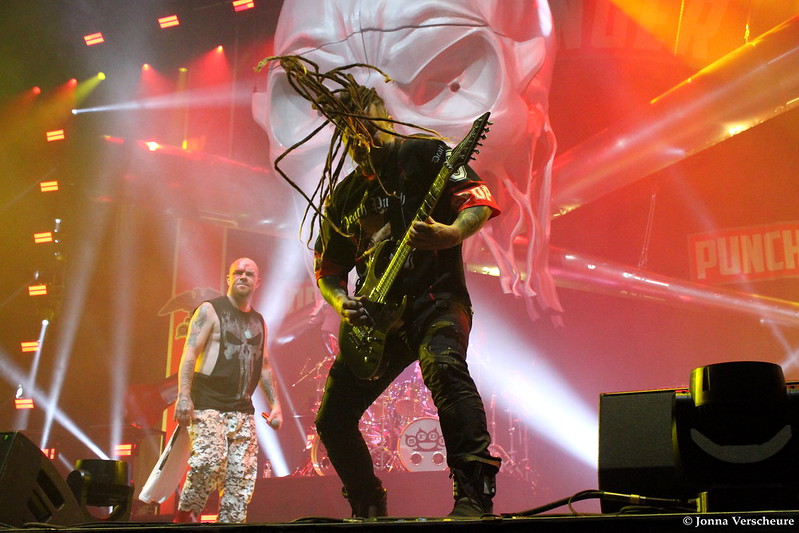 Moody seemed to be his old self but completely sober right now. He jumped and ran around, communicated with the crowd, fooled around and messed with the other band members' gear. The groovy heavy metal soon started up quite a sizeable moshpit and circle pit and the crowd jumped at every command coming from the guys. Clearly being thankful for the continuing support there were several moments that 5FDP did something back: they grabbed a flag from some front row people and signed the damn thing, during Burn MF they brought a crowd surfing girl on stage with them to hang out a bit, during the acoustic moment of the set Moody climbed off the stage to get close to the crowd and sing face to face to them and like at every gig of theirs they gave away the baseball bat that Moody walked around with smashing things. And they closed on a high note with The Bleeding during which for quite a part of the song, most of the light was provided by the thousands of phone lights held up by the fans. A very enjoyable and strong performance, though let's hope that in the future they bring the pyro back on stage once they trust Moody again, it would be a welcome addition to an otherwise exciting show. 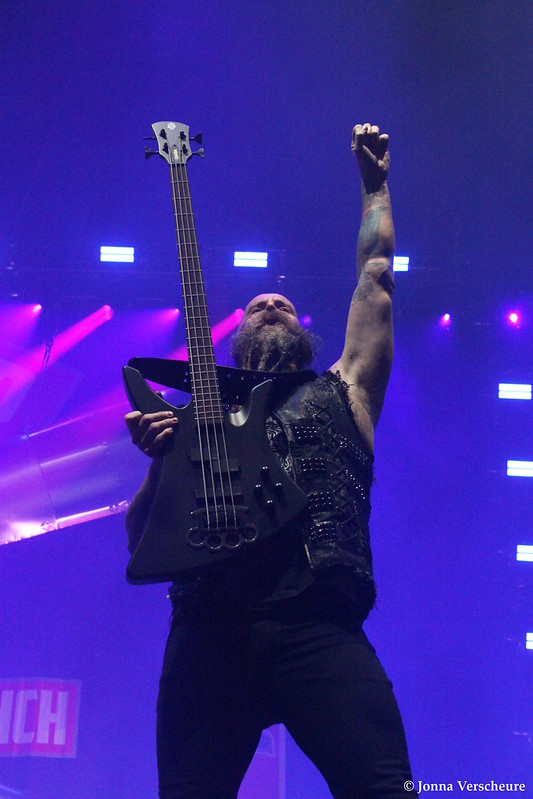 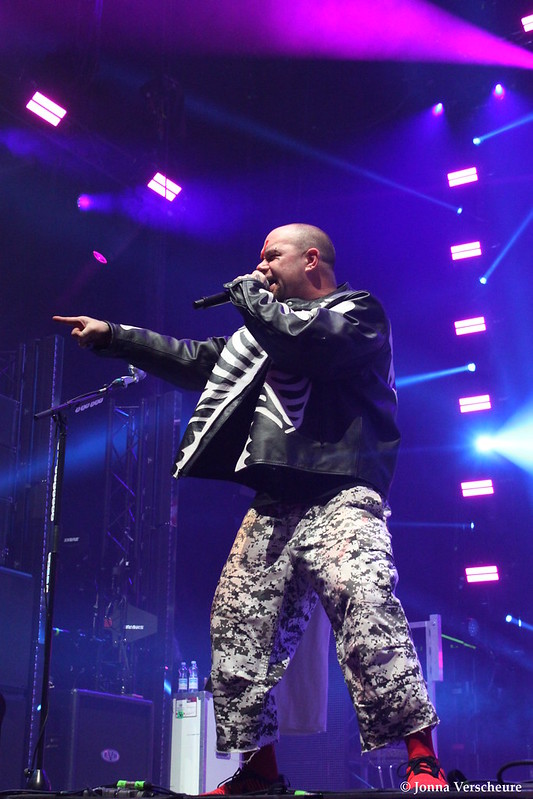 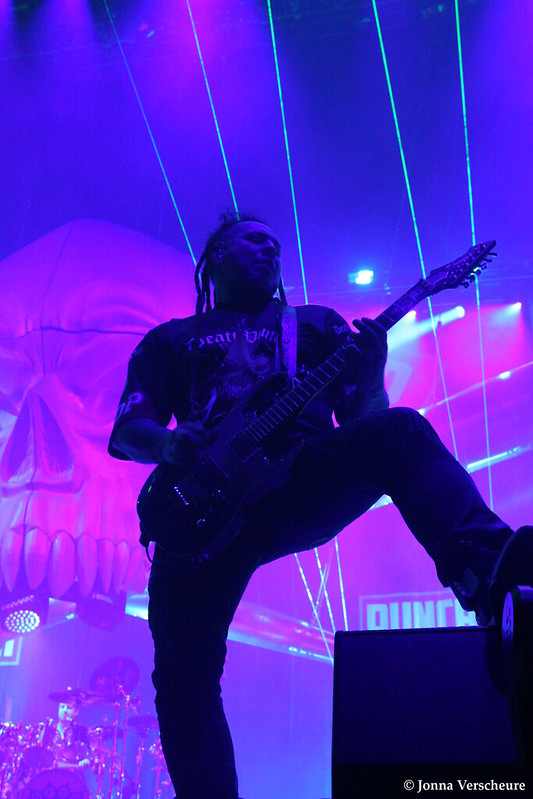 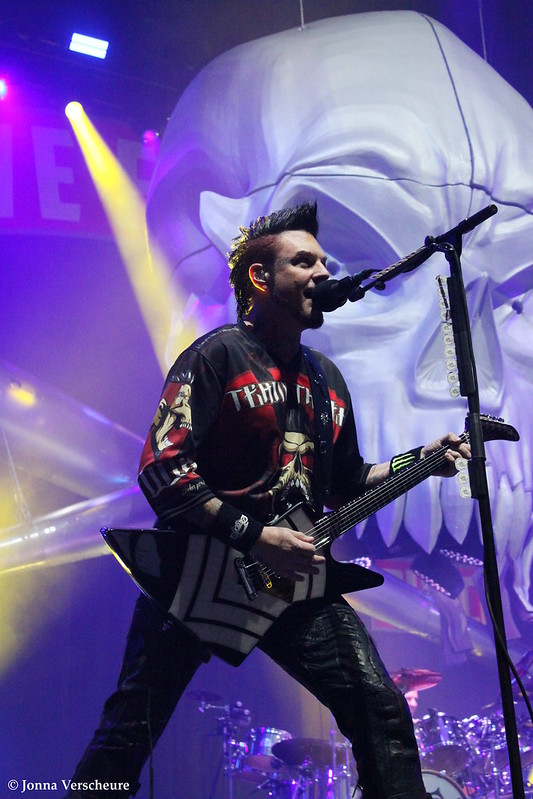 At the first stop of their massive European tour, Swedish In Flames (****) got to close down the night. With some delay they finally kicked off the show by playing Drained from their latest effort Battles, bathed in smoke and red lights, partially obscured by the see-through curtains bearing the In Flames logo. Even though on record it seemed that with their last release they went less heavy, there was no sight of losing any of their edge. With the start of the second song Before I Fall, the curtain fell as well and revealed a pretty cool stage set up. The drum kit with drummer Joe Rickard and keyboards were both put high up in the air on 2 separate light boxes in front of which Anders, Björn, Niclas and new bassist Bryce moved around. Niclas was running and hopping around from side to side with that typical big Swedish grin on his face, definitely enjoying himself. The room completely exploded when they moved into one of  their older tracks (and my personal favorite) Take This Life. 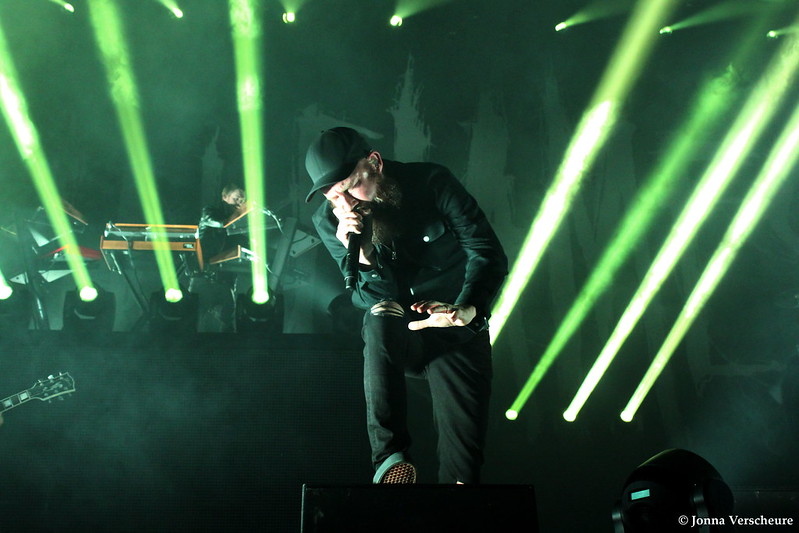 They embarked on the part of the setlist where they played quite a few of their older albums like Trigger, Only for the Weak and Moonshield. The massive and never-ending circle pit was clear proof that those tracks still very much speak to the fans.  The band was fired up, the crowd was completely lit and whether it was an old track or a new one, everyone went crazy. At a certain point during the set Anders asked from the crowd to forget about getting updates or posts for their social media, put their phones away, go analog and enjoy the fucking show. Something I could only agree with, since nowadays a lot of people see a gig mostly through the screen of their smartphones instead of actually experiencing the performance fully! 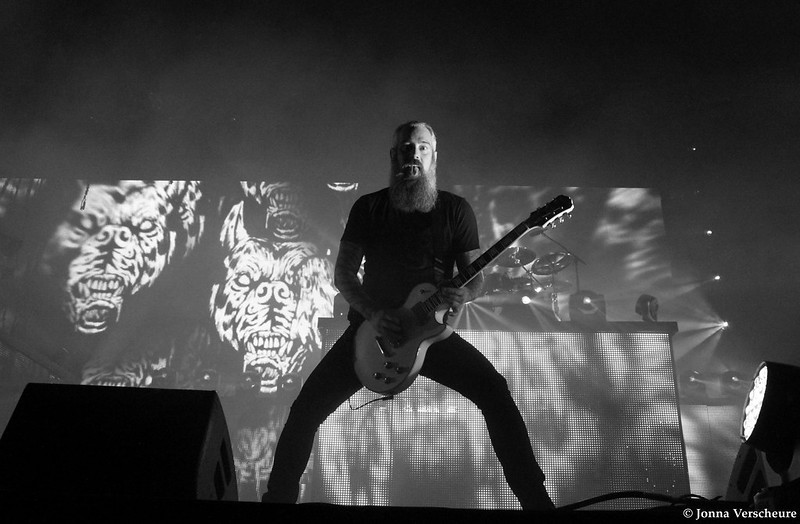 And that performance and stage production was put forward as good as flawlessly with a video backdrop of which the images came back on the 2 big lightboxes on stage. That in combination with quite a bit of lights and lasers, and the appearance of the "Owl boy" from the cover art of A Sense of Purpose during Alias in the form of a huge doll hanging from the rafters just brought that touch of extra to the show. Would I have liked to hear a few more songs from for instance Come Clarity? Sure, but there wasn't a moment that I got really bored or that In Flames didn't impress me with their massive sound and performance. Not a lot of complaints here... 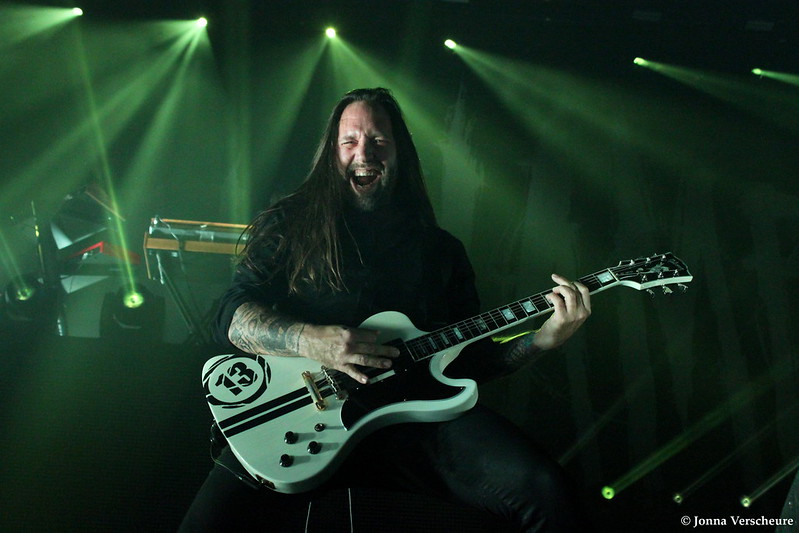 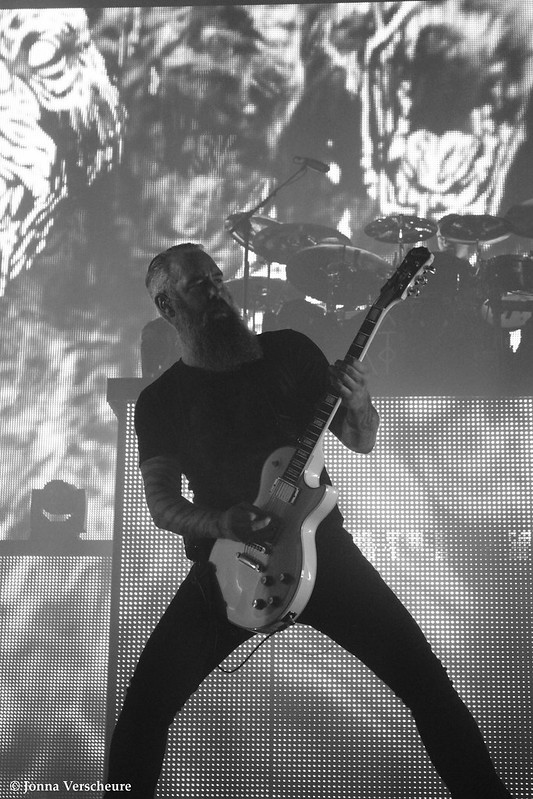 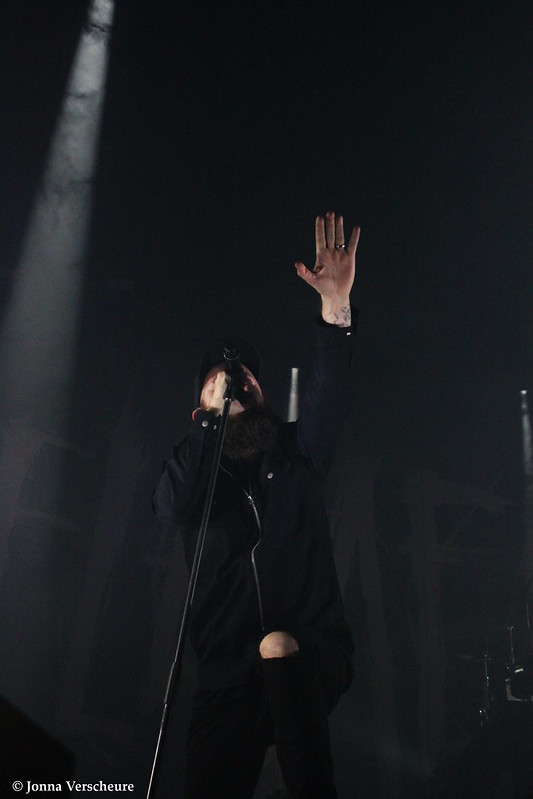 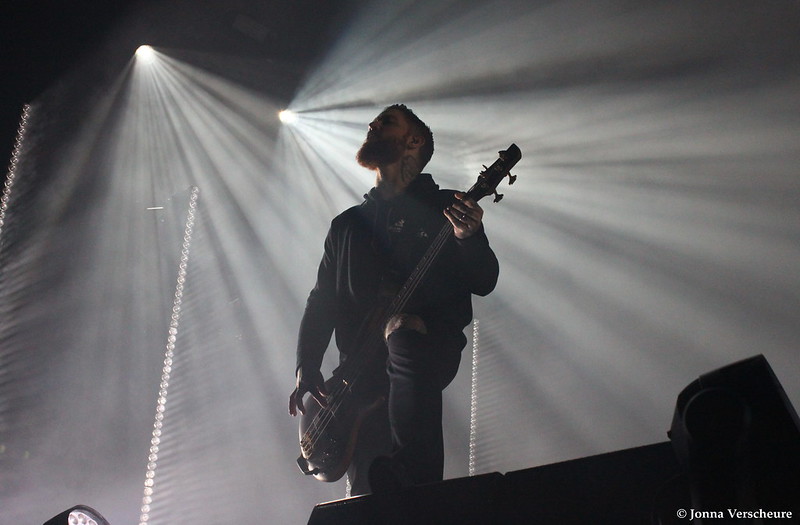