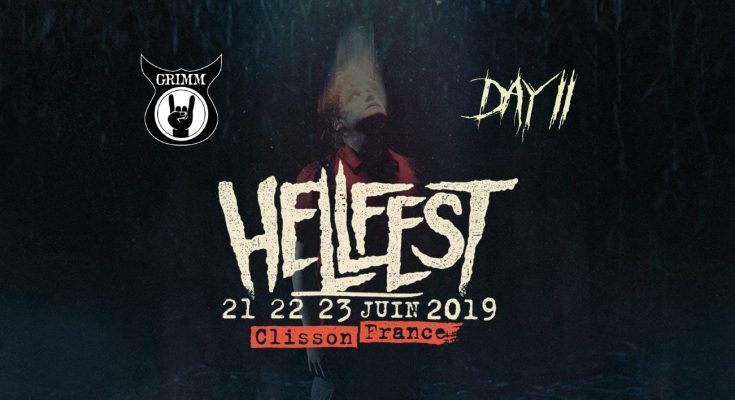 This ultimate party is always a must to see on festival grounds for us, it does not matter when or where to place them but you can always be certain for one thing: Skindred will get the people on their side.

The Newport Helicopter took this second day of Hellfest to a amazing height and got us pumped for the rest of the day. In an earlier interview we had with the band the told us they have a dream to headline a festival one day, what is a certainty for us is that they will.

Never underestimate the will to “Fight The Power“, we are all in “Danger“.

Call it Digipunk, call it Industrial Metal, call it whatever you want. Still very unknown in Belgium, Punish Yourself is a French band that likes to explore boundaries and want them push the further. With their innovative style we see some things most parents do not want their children to see.

The fluorescent costumes, grinders on the metal chest pieces, the dancer with the flaming breasts (yep indeed!) all these theatrics give this show the resonance it deserves. Well performed and another unique performance on the bill put forward on this amazing festival.

Symphonic Black Metal meets terrifying storytelling, Carach Angren has set its course to bring us orchestral arrangements and stories that show us the darkest side of the mind. With a captivating performance and moving platforms on stage they won many hearts and minds of the people of Hellfest.

Stay tuned for the interview we had with the singer and founding member “Seregor” coming out soon!

Breaking the rules on a musical level is what Combichrist does best, not all bands bring the feeling of pumping walls of sound like Hardcore, the electric vibe of Industrial Metal and the walls of Death of Thrash Metal. Combichrist has it all and the Temple Stage was at their feet.

With the new album “One Fire” just out we did get an eclectic set with the best off mixed in with the songs these Aggrotech giants want us to sing along to in the future. Great vibe and a top notch performance of the moshers at the front!

These very peculiar Swedes do know how to fill the air with that distinct eerie feeling of doom, which they promised to deliver from the very first second they took the stage. Opening with a song released even before this humble reporter’s birth, they indeed found their way well into the public’s soul.

Candlemass has a reserved demeanor on stage, both delivering a solid show with all their best songs while being humble and open towards the audience. They grew beyond the need of fancy tricks and lights, relying solely on their experience and expertise. It shows that these guys have been around, but Candlemass aged like a fine wine which fails to disappoint. Needless to say, when their final song Solitude ended, it indeed was a feeling felt by many.

So, most people will know that there is more than just one band that cancelled their performance on Hellfest. Myrkur had to cancel their performance as well, due to pressing baby matters. To be fair, most people were a tad surprised to say the least to learn that a pregnant woman originally intended to take the stage so far into her pregnancy!

To replace the beautiful mommy to be? Another beautiful woman named Jo Quail. She brought a very unique performance like none other over the course of the whole festival. Being all alone on stage, accompanied only by her electric cello and a looper pedal, she brought an experience that would require most mortal men a multitude of people on stage.

Every song is built up, and she uses many effects and techniques to end up creating a wall of sound, where one could imagine being in front of an orchestra. If you ever have the chance to see her live, don’t miss it. It might not be the get-drunk-and-party experience, but it is very impressive nonetheless!

What Rock or Metal fan doesn’t know Def Leppard? After the intro song, “Personal Jesus” by Depeche Mode, the band was ready to convince the crowd that they still got what it takes after all these years.

With classics like Let’s Get Rocked, Love Bites, Hysteria and Rock of Ages, the setlist was sure to please a lot of people. Sure, it’s kind of predictable that they would play these songs, but that’s not a bad thing. The band did a good job at letting us relive the 80’s a bit.

Nearing the end of the show, we got treated to probably one of their most famous songs, “Pour Some Sugar On Me“.
If you haven’t seen Def Leppard live yet, be sure to give them a chance!

It’s always a pleasure to be able to attend a concert of ZZ Top. When going to a ZZ Top show, you know it’s going to be rather calm, compared to many other shows at the festival. However, you also know that you’re gonna get to hear some great songs. This time it wasn’t any different.

They started off with some nice tunes in the form of the song “Got Me Under Pressure” which was maybe a bit of a slow, calm start though, but that only meant that the anticipation to hear our favorite songs by ZZ Top got even bigger.

“Gimme All Your Lovin‘” was probably the first song that got more of the crowd’s attention. The setlist could have perhaps been shuffled in a more interesting or better order, but because of how the setlist was built up, the show ended with a lot of their most popular songs, like “Sharp Dressed Man“, “Legs“, “La Grange” and “Tush“.

Being one of the 3 main bands to get the credit for being a pioneer of the Gothenburg (Melodic) Death Metal sound is a big deal by itself, but after all these years they still prove time and time again that they are worth our time.

Whether you’ve already known this band for years, or got to see them for the first time at Hellfest, you wouldn’t leave the show without a smile on your face. Even if the music itself, which was top notch, didn’t put that smile on your face, then vocalist Mikael Stanne‘s enthousiasm and charismatic attitude would surely do.

Unlike some bands that, after being around for so many years, seem to just put up a show, Dark Tranquillity seems to really enjoy their time on stage to the fullest.

It is happening, the final tour of this phenomenon is passing through France and we did got to see a lot of the Kiss army partying all day at Hellfest. The stage was set for that one last time, the big exit of one of the most influential bands in Rock and Metal history.

The show was perfect, the sound of the guitars was awesome, but the singing was sometimes cringe-worthy and overzealous. What we also did not like are the overlong drum and guitar solo’s. The performance of Kiss could easily been cut in half and we would still get the same amount of songs.

We surely do love Kiss, but we do need to have a discussion about the fact that most headliners get to many time on stage and just try to pass the time with unnecessary filler. Keep on rocking, play fast and play loud.
All in all, we still love you Kiss! You have fought, you have won, and now you rest.

Another band we are stoked to have had an interview with on Hellfest, we do not have to give you an introduction of course because this English rock band has been around forever.

The Gothic vibe on stage was real and the sound was foolproof, we were surprised by the fact only half of the tent was filled with people. That begs us to ask the question, “was this not extreme enough? Did the people wanted to have a party band instead?” We liked this kind of headliner on the Temple stage, it brought back so many memories and gave this day a more history filled cherry on top of the awesome cake that this day was. Sleep tight..