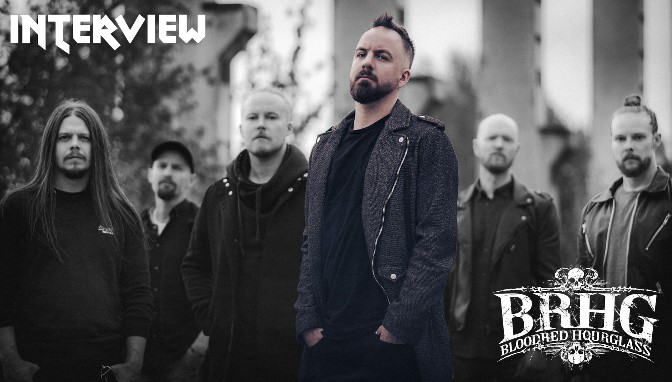 While originally, Sweden was THE hotspot for melodic death metal in the Nordic region. But in the recent years, Finland has definitely carved out quite the spot for them in that realm with iconic bands like for instance Insomnium. Another band that has been working hard on their career, is Mikkeli-based Bloodred Hourglass. They’ve been around for well over 15 years and while they had epic compositions from the beginning, especially with the release of 2019’s ‘Godsend’ they started gaining a lot more international attention and it seemed the only way for them was up. Now after some line-up changes, they’re gearing up to release full-length number 4 with ‘Your Highness’, seemingly another step up and new chapter for the band. Time to have a chat with vocalist Jarkko Koukonen about the upcoming release…

Jarkko talked about how they had to switch things up after their main songwriter Antti left, having to figure out how to come together with the 6 of them now to write some good music that doesn’t turn its back completely on their past and how empowering it was for them to change the outcome somewhat. And while they kept their signature sound, how they attempted to give their already pretty great brand of melodeath an update into the realms of modern metal through more epic soundscapes. We also touched on how Jarkko on this album uses clean vocals in several songs, including even a track with mostly cleans, and how it was for him to find his strength and voice in that. Of course we also touched on the overall theme of the album where they take the balance between good and bad in life that everyone can relate to at some point in their lives. Jarkko also tells the story behind the cover art of ‘Your Highness’ and how it was a deliberate change of pace compared to the earlier 3 albums. And since they are claiming to show the world how modern metal should sound like, we asked Jarkko which bands he has discovered and liked recently of which he feels they are very much forerunners of that “modern metal” tag.