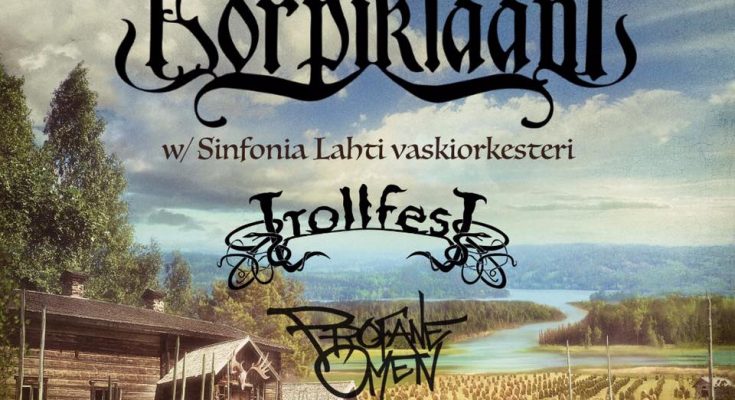 Some of the more popular Finnish bands are actually quite rare to catch live in their homecountry because their extensive touring all over the world. One of those bands is the folk metal outfit Korpiklaani. So when you notice they’re actually coming to play a show in Helsinki, you jump at the chance! Put on top of that, them bringing the Sinfonia Lahti vaskiorkesteri with them to play along with them makes it sound al the more promising. Throw into the mix support gigs by the wacko Norwegians of Trollfest, country mates Profane Omen and Waltari and you know you’ll be into one hell of a (folk) metal party! So there we go, braving the Finnish Winter weather for a night of heart-warming happy music!

Opener of the evening was the rather cult band Waltari (**1/2) and kind of a special case I must say. Calling themselves the “true crossover band”, they sounded actually like a fun band when I checked them out before going down to the show, with a blend of alternative metal, progressive metal, death metal, hard rock, heavy metal, hip hop, industrial, pop, punk, symphonic metal, techno and thrash metal. Seemed like a damn party to me! When they started with some beats and seemingly a lot of energy, I thought that it was actually going to be a whole lot of fun! But to be honest, after the first couple of songs, I quickly got a bit bored with the formula because there was barely any variation in it, it quickly ran kind of stale and sometimes too much different styles at once. Also the vocals seemed a bit off to me at times, something that couldn’t be overlooked despite the seemingly endless energy that the red haired vocalist had. Was it an “off day” or just a bad soundmix? I don’t know, but it just didn’t seem to hit the spot with me. 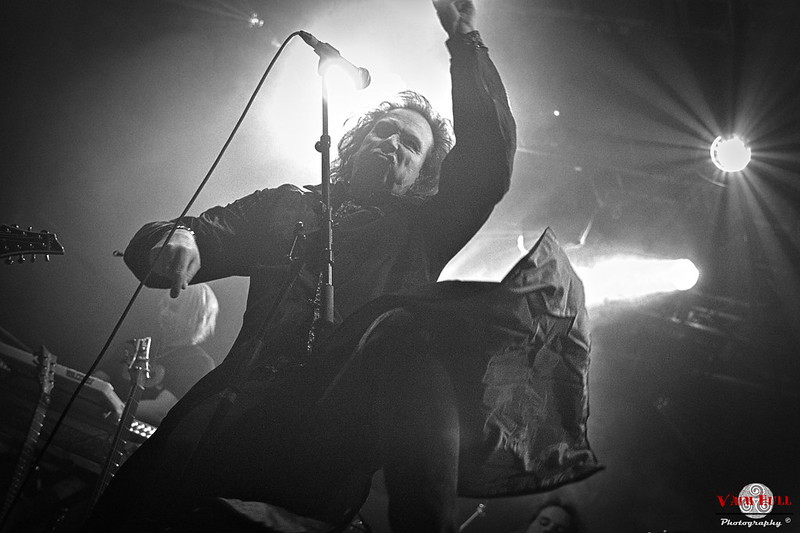 Next up was Profane Omen (***1/2), another through and through Finnish band. And way more consistency in the music this time around. Top of the shelf unfaltering melodic groove metal with clear hints at the godfathers of groove metal, Pantera. Truly a bomb of thick groove and heaviness, not too surprising seeing that there were 2 live bass players! What I didn’t know on beforehand and actually surprised (and confused) me a lot when they kicked off, is that the actual vocalist had a live replacement under the form of Tuomas “Tommy” Tuovinen. Since I thought that he retired after leaving Oceanhoarse due to something wrong with his hearing, I was taken aback somewhat when he appeared on stage. Happy to see him though, because every time he’s performing, he turns the energy and passion up a notch with his always impressive vocals! 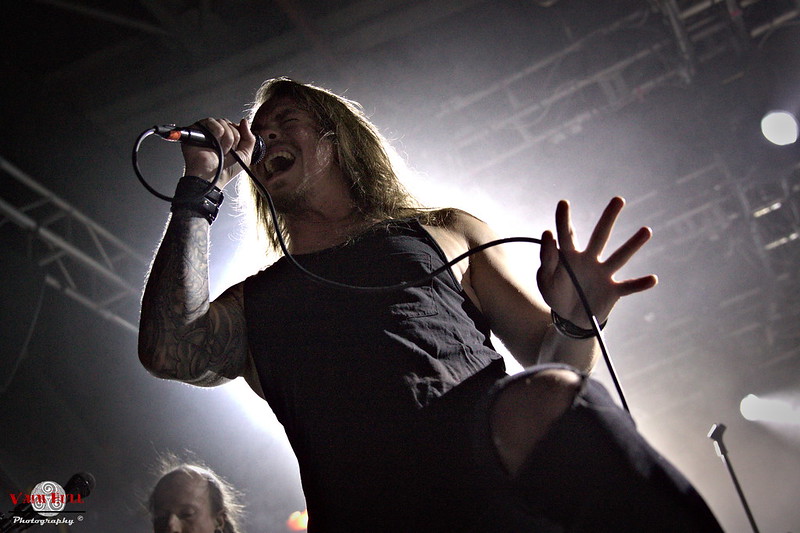 I used to be a huge folk metal fan and listener. One of those bands I never got around to see live, but absolutely loved, is the Norwegian Trollfest (*****). I actually lost track a bit of these guys since those early albums that I still love to this point. From those albums I knew they were very quirky, fun(ny) and upbeat with just that right amount of harshness, but nothing prepared me for the spectacle I got in front of me when the curtains opened. Every single one of the band members were dressed up in princess dresses including make-up and tiaras. 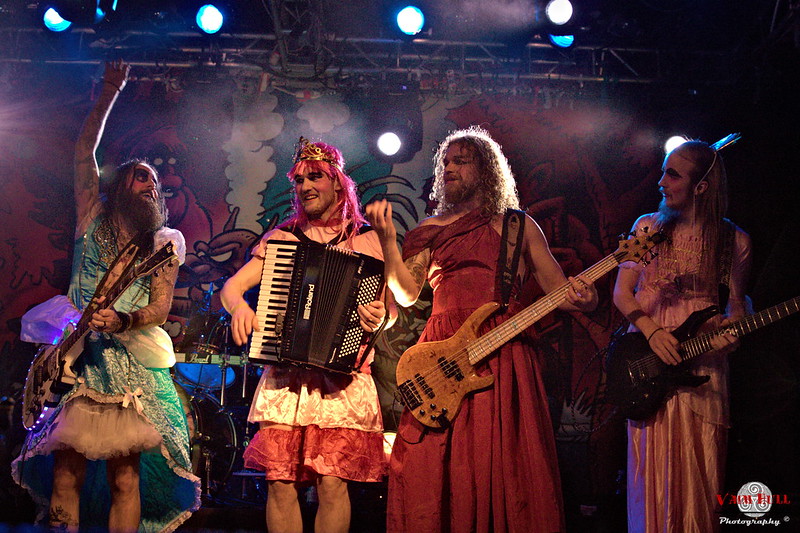 Except for frontman Trollmannen, who strode on stage dressed as his royal majesty with a red cape and enormous balloon crown. Just seeing that already brought a huge grin on my face in delight. Think Alestorm and Finntroll having a baby, dipped in a bonkers world of Disney princesses, all matching with uptempo and energetic heavy music (even an awesome rendition of Britney Spears‘ “Toxic”). They wanted chaos in the room and they didn’t want to leave without it! And even if the band itself wouldn’t have been so crazy active on stage, the music itself gets you easily moving with a whole bunch of folk and Balkan influences and besides the regular set of guitars, bass and drums, with saxophone, keyboards, harmonica, extra percussion manned by Trollmannen and cowbell, of course cowbell! If you at any point get the chance to see Trollfest live, DO NOT HESITATE!!! 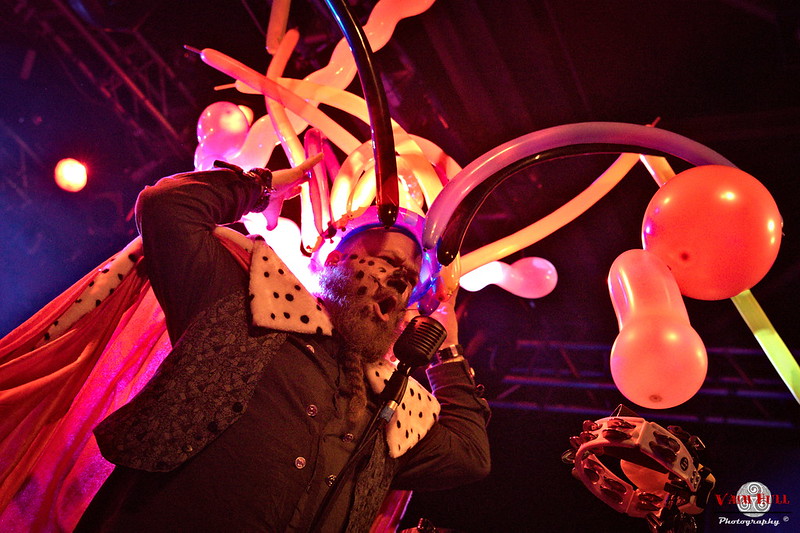 Headliner of the night was Korpiklaani (***1/2) playing for their country peeps. I’ve seen these folk guys quite a few times back in the day and they were always a delight to see then. To be honest, I’ve kind of lost touch with them because their new music started to sound all the same to me and kind of bored me easily. But hey, in those glory days they were absolutely awesome, so maybe they can still bring it live, I said to myself. And yes, they were very energetic and lively on stage, bringing the passion and fun to the room (except for bassist Jarkko, who was his typically calmly walking around bearded self). But sadly, them playing as the first 3 songs the 3 opening songs of their latest album Kulkija, just got me to quickly lose attention. Despite the charismatic performance of Jonne and his friends, they just couldn’t pull me in. Where are those good old classics like Hunting Song or Under The Sun that I shouted along so many times, to name just a few? And yes, of course at the end of their regular set they played the golden oldie Wooden Pints and of course Beer Beer, but by then they had lost me already to exactly that: beer. 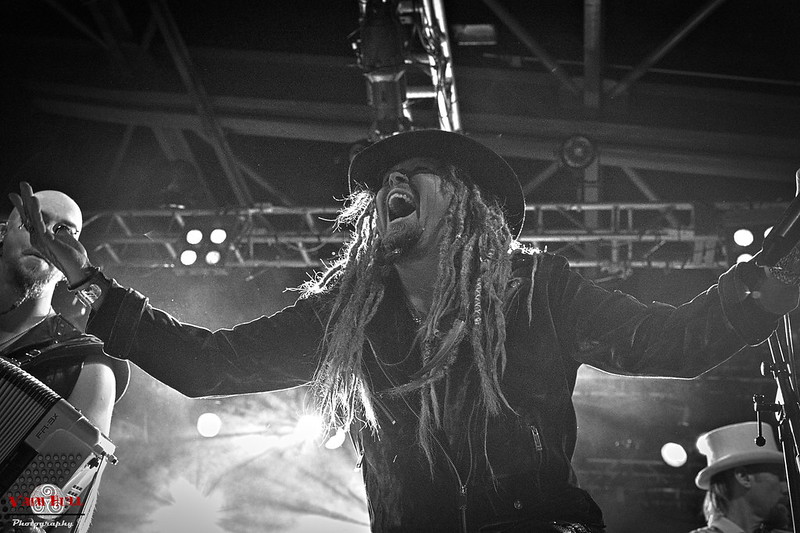 As a special bonus set, they still brought the Sinfonia Lahti vaskiorkesteri on stage, a brass band orchestra that blared along with the rest of the songs they played still. This brought me back a bit more invested, because something new and different was happening. And they did play for instance Metsämies as one of the classic Korpiklaani tracks, but again they started to lose my attention again quickly. The old power surged up again for a short while at the last 3 songs with the triumvirate Tequila, Happy Little Boozer and Vodka as if they didn’t want the party to end yet, but I’m wondering if the real fans are actually satisfied by getting just those party tracks instead of hearing a couple more of their (at least) equally fun and energetic older tracks that were more serious. For me Trollfest was the true headliner, Korpiklaani had a tough job following them up and although still sounding pretty good, just made me miss the period over a decade ago when they blew my away every single time. 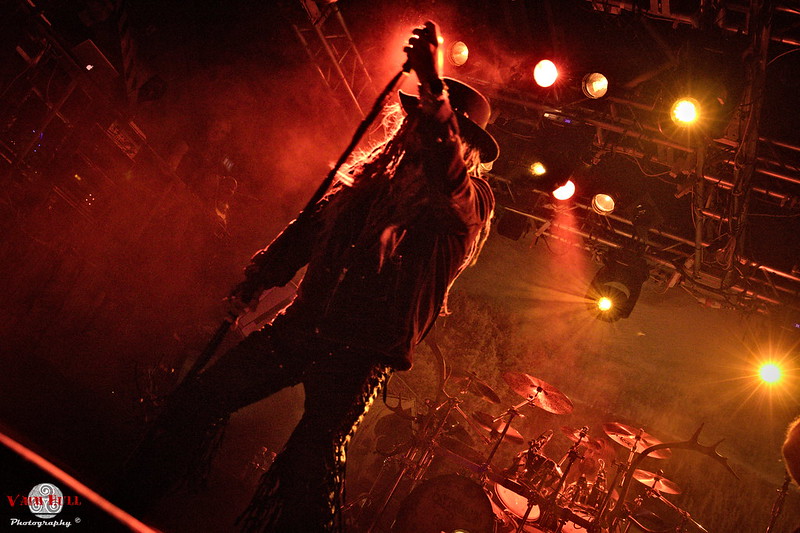 For more pictures, go to our photo coverage here: