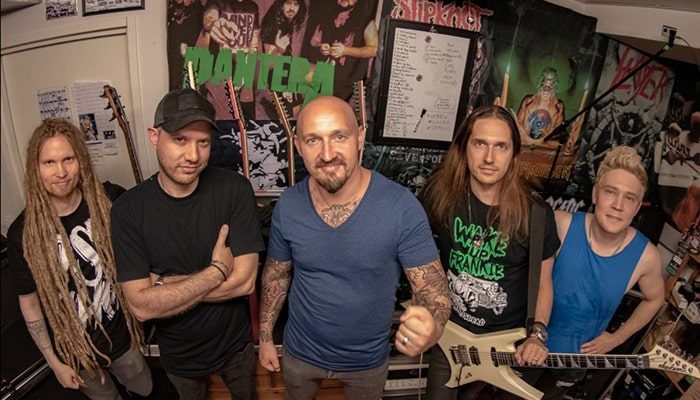 Helsinki-based Heavy f*cking Metal group Oceanhoarse likes to keep busy. After the touring plans for this fall were put on hold due to the pandemic, an idea struck somewhere in between the relentless songwriting and the upcoming studio-sessions: Let’s just jam on a couple of Ozzy songs – and film them!

Guitarist Ben Varon tells the story behind the concept:

”All four of us in the band are big time Ozzy Osbourne fans. His work with Black Sabbath is of course legendary, but it’s Ozzy’s solo material in particular that has a special place in our hearts. Those iconic songs are some of the covers we have played frequently at our rehearsal place just for fun, and occasionally these tunes have ended up in our live set too.

We just released our latest single ’Locks’ in September and we are planning to release the next one in November, so that left us wondering what shall we do in October… Well, how ’bout Ozztober?! And this year being the 40th anniversary of ‘Blizzard of Ozz’, Ozzy’s amazing solo debut, we couldn’t think of a better time to pay homage to the Prince of Darkness.”

The idea of bringing in some guest stars came from necessity: to properly cover ‘Shot in the Dark’, you need to have keyboards. And with the band’s motto being ‘Fuck Your Backing Tracks’, using pre-programmed synths wasn’t an option. So, a call was made to the best keyboard player in town: Janne Wirman of Children Of Bodom.

“My buddy Jyri, ‘Snakehair’ as we call him, asked me to come over and play an Ozzy cover with his band Oceanhoarse. I had no other option but to agree, as I have asked Jyri a plethora of favours over the years, including everything from dropping snow from my roof to being the designated driver! Children of Bodom has covered the track years ago as well, and since the keyboards are not the lead instrument on this song by any means, I had a great time chilling and jamming with the Oceanhoarse dudes at their rehearsal place.”

Janne being on board, the band then expanded the idea of bringing in guests for the other songs as well. The task was fairly easy, considering the fact that in the metal scene, everybody seems to love Ozzy. The idea is that Ozztober wouldn’t be just an Oceanhoarse thing: everyone is welcome to join in! Guitarist Varon invites and prompts:

”We know there are many fellow Ozzy fans out there, so welcome aboard! Let’s fill social media with all things Ozzy for this Ozztober! We’d love to see you playing your favourite Ozzy guitar riff at home or doing a full band cover, or whatever you feel like doing that fits under the hashtag #ozztober. The world needs more Ozzy!”