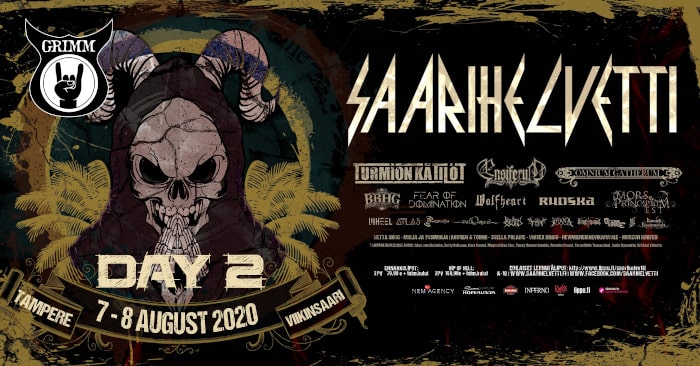 A festival during this crazy times of COVID-19 pandemics? Madness you say? I guess that’s an apt description of the festival that describes itself as the “Island of Hell” or SaariHelvetti. Taking place on the Viking Island in Tampere, Finland, this relatively small festival has become a staple in the Finnish festival summer with usually some pretty big names of the metal scene, both international and national. This time around they were forced to have a “corona edition” with only Finnish artists, but what a line-up! Gathering the top of the Finnish scene complemented with some of the up-and-coming bands, it promised to be quite the weekend!

After an already pretty awesome first day (for the report go here), we geared up for the second one that promised a lot of melodeath, industrial and a touch of black metal. The overall heat of the day, our tiredness of having been in line for over an hour to get back the night before and the amount of people that already lined up to get to the island, caused us to miss out on the first 2 bands of the day: Horizon Ignited and Mors Principium Est. A pity, but we still had 9 bands to fill our day with epicness and parties!

First band we managed to see on stage, was Kaunis Kuolematon. This band is known for having their own very particular sound. The one moment they float into the realm of melodic doom in all its beauty, to suddenly burst into an onslaught of death metal and the other way around. The combination of Mikko‘s stunning and melancholic vocals with the intense growls and screams of lead vocalist Olli brings in a great contradiction and dynamic. In a way this kind of music is best seen live on a dark stage backed with atmospheric stage lighting, but that didn’t hold them back one bit to throw everything they had at us. A great first meeting with this band, I definitely want to see them again in a different setting!

Back to the main stage, where on of my personal favorites was about to shred the place to pieces: Wolfheart. To my surprise they opened their set with a golden oldie under the form of ‘Ghosts of Karelia’. However, this track fits in perfectly with the whole theme of the Finnish winter war that was featured on their latest release ‘Wolves of Karelia’. Besides that track from their very first full-length, they pleased all the old school fans with ‘The Hunt’ and ‘Strength and Valor’ from the same release. Of their latest release they treated us with the absolutely crushing ‘Hail of Steel’ and ‘The Hammer’ and topped it off with ‘Breakwater’, ‘Aeon of Cold’ and ‘Abyss’, representing almost every album of their catalogue. For its 45 minutes setlist, you almost couldn’t expect a better variety than this. The band was in good form, obviously happy to be on stage again and delivered another great Wolfheart show as we’ve come to expect from them.

By now, I’ve heard plenty of good about Vorna. The fact that they had a slot at SaariHelvetti this year, was the perfect moment to finally check them out. And I have to agree that this is a damn good band. Their pretty epic sound that blends elements from black and folk metal with a heavy pagan touch is so perfectly Finnish that it’s easy to fall in love at first sight. Throw on top of that the lyrics that are completely in Finnish and comparisons with Moonsorrow or even Havuukruunu are never far away while still having their own personality. And add live the pure passion that every single member of the band shows while playing and you got me hooked! Kudos for the tree log shaped drum kit, by the way. Loved that detail!

Time to be a bit less serious and time for a party! The second day promised quite a few decent metal parties with 3 bands that you simply can’t help but dance to. First one of the day was Fear of Domination on the mainstage. The colorful bunch took over the stage and as soon as they kicked off with their classic track ‘Fear of Domination’, the people gathered in front of the stage turned into an overly excited and dancing mass. This is one of those bands of which you’re never sure who is actually having the most fun: the band or the fans, incredibly entertaining to watch and always a delight to catch live. As often they wrapped up a great show yet again with their great rendition of the Bloodhound Gang‘s ‘The Bad Touch’. All hyped up and ready for more of this!

The show on the Inferno stage of …And Oceans was something that I both was looking forward to and dreaded. Recently they released a brand new album with a new vocalist and despite it being a pretty good symphonic black metal release, I wasn’t too sure about it being the …And Oceans album I would’ve wanted. After having seen them with their original vocalist a couple of times I was curious to see how Mathias Lillmåns (Finntroll) would do as the replacement. And I’d have to conclude yes and no. While Mathias really fits well with the rest of the band and puts down a great performance with menacing vocals and at times looking completely entranced by the music, it’s hard to forget the wacko craziness that Kenny brought to the table. The tracks that were composed and recorded with Mathias as frontman sounded absolutely stellar, the older tracks they played like ‘I Wish I Was Pregnant’ missed some of the frantic screams I’d come to expect. Still a great show by one of Finland’s legendary black metal bands.

Omnium Gatherum, underrated or forgotten by some, heralded by many as one of the best melodic death metal acts Finland has to offer. One thing is sure, no matter where or when you catch these guys on a stage, you’ll get top musicians playing their hearts out with energy through the roof. It being Markus Vanhala‘s pet project, you can be assured of soaring guitar solo’s and heaps of melody. Simply said, just as always it was a pure delight to see Omnium Gatherum live yet again, nothing more and nothing less, they always know how to deliver.

You remember me talking about having a few metal parties? Well, time for yet another one with King Satan. Things were turning a bit weird with them though… as to be expected. The band led by King Aleister Satan never shies away from some controversy or pure weirdness. A bassist looking like a hippy from hell, Aleister himself in top hat and bright red coat as the leader of the freak show, the lovely Katherine Boss dancing away to the beats behind her keyboards and to top it off the extra “beat master” and mascot Jack, a scantly dressed gas mask wearing man-goat. Visually they’re great fun and have the music to match. The blend of AggroTech infused industrial metal with a strong Satanic note is dark dance music of the highest quality. “Praise Hail Satan, Satan is best so fuck the rest” rings oh so true with these band of misfits.

Turmion Kätilöt must have thought that we needed some more warming up, because they brought quite a bit of pyro with them. Being one of the most popular metal acts within the country, I was sure it was going to be quite the party at the main stage for the last time this weekend. And I was right on the money, because as soon as they kicked off with ‘Naitu’ and ‘Kyntövuohi’, 2 of the heaviest tracks of their latest release ‘Global Warning’, it was like a bomb exploded. Not counting in the fire and explosions the band caused themselves, that is. Turmion Kätilöt is a well-oiled, mean and lean industrial metal machine and a show from them is always played at the highest level. It was great to get to hear the more dark and ominous ‘Sano kun riittää’ live, one of my favorites of their latest release besides many of their “disco metal” classics. MC Raaka Pee and his mates came, conquered and set the island on fire, creating an almost real “Island of Hell”!

Last band of the weekend was quite the special one. The melodic death metal act MyGrain hadn’t played live in over a year and with the announcement of a brand new album (the first in 5 years), SaariHelvetti being the only festival they are playing was something to really look forward to. It was also the first time they performed without live keyboards since they changed their line-up from a sextet to a quintet. But to be honest, I didn’t miss it one bit. They sounded tight as hell and it felt like they were playing with new energy compared to the last time I saw them live. It grooved, it packed a heavy punch and the melodies soared. With rather sparse lighting and quite the puff of smoke, they created a truly special atmosphere that elevated their performance to great heights. A perfect finish for an almost unreal weekend with great acts that I didn’t think being able to see this soon again already!

For more pictures of the 2nd day of SaariHelvetti, go here.