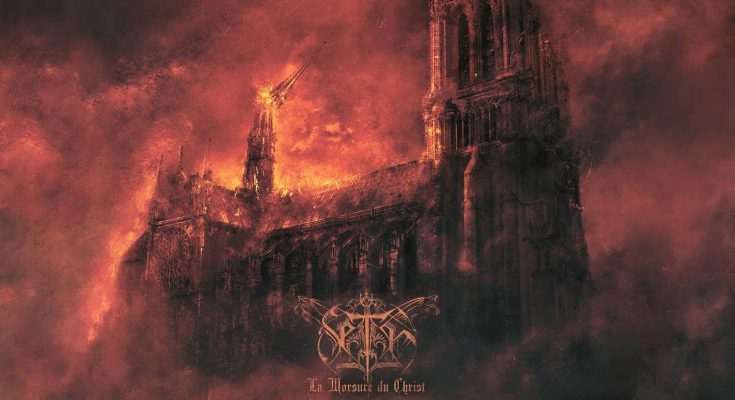 French black metal pioneers SETH have teamed up with Black Metal Promotion for the release of their new song “La Morsure du Christ”. The band’s new, self-titled album is set for worldwide release on May 7, via Season of Mist. Pre-sales are available HERE.

“This is a great day for SETH! We are proud to present the very first track of our new album ‘La Morsure du Christ’. Twenty-three years following the release of album one, ‘Les Blessures de L’Ame’, the world moved further away from religion and spirituality. The demise of Notre Dame de Paris symbolizes the end of Christianity, whose treacherous lies burnt down the theatre stage of the Holy Church. In the remaining ashes, Christ appears as a deceiving ghost searching to spread his anesthetic venomous grip: ‘La Morsure du Christ’, the bite of Christ.”

SETH have previously unveiled the artwork and tracklist of ‘La Morsure du Christ’, which was created by Leoncio Harmr and can be found below.

The history of black metal formation SETH and Season of Mist spans back to the early days of the French metal scene. The band’s debut ‘Les Blessures de L’Ame’ (1998) was one of the first releases on the label. This album is now regarded as a cornerstone in French black metal, pioneering the usage of their native tongue on a black metal record. SETH has lit up the flame of those early days again with ‘La Morsure du Christ’, which can be seen as sequel to the highly acclaimed debut.

On the new record ‘La Morsure du Christ’ (a double meaning title: literally « The Bite of Christ » and phonetically « Christ’s death is certain »), they return to their original sound, employ French alexandrine verse in their lyrics and choose a striking image as an album art. The blazing inferno of the Notre-Dame de Paris is depicted on the cover, an event that shuddered the world on April 15, 2019. The release of the record marks the 2nd anniversary of the event.

It’s a powerful picture that conveys the very essence of ‘La Morsure du Christ.’ In a world moving further away from religion and spirituality, the demise of this landmark symbolizes the end of the Christian reign and the ultimate betrayal of God. From the ashes of the cathedral, a godless world will come into being.