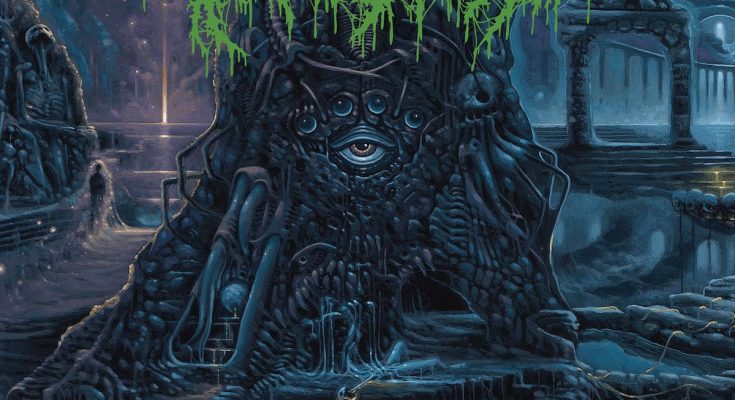 The third album from the Canadian visceral death metal outfit Tomb Mold is a great follow up to the sophomore album Manor of Infinite Forms. Planetary Clairvoyance is a conclusive record where the band attempts to perfect its sound yet in a more unrefined way. Tomb Mold who took a solid and raw manner towards death metal with the first album are now steadily building a strong discography. This seemingly made them closer to the Finnish death metal bands such as Demilich, Demigod and Adramelech. As a result of minor alterations from the prior releases Planetary Clairvoyance is another sophisticated musical work. The astonishing accuracy and the technical talents make them one of the outstanding acts in the sub-genre. Albeit the influences from the Finnish death metal can be identified by the energetic bulky riffs, setting themselves apart from many bands. If Manor of Infinite Forms was a milestone ahead of its predecessor, then this makes Planetary Clairvoyance a superior record to the sophomore.

Tomb Mold consist of Max Klebanoff on drums and vocals, Steve Musgrave on bass guitar, Derrick Vella on guitar and Payson Power on guitars. The quintet mainly elaborates on the bizarre and alienist type of riffs as they genuinely extend to explore further into the fundamentals of the Finnish old school death metal bands à la Demilich. The distinguishing qualities of the heavy chunky riff tempos and sudden blast beats dominate their sound. Tomb Mold seems to venture into the darker sphere of morbidity and it somehow feels that the new tracks show a propensity towards the slow mid-pacing death metal style. Album opener “Beg for Life” is built upon strong and intricate lead guitars the low guttural growls which sounds filthy as ever.

The second track Planetary Clairvoyance (They Grow inside Pt.2) displays the technical traits of the Canadian quintet. The bludgeoning blast beats are brought by the dynamic force of the drums, which gives a further boost to the track. The first half of the album is abrasive and brutal every aspect of the album is propelled by the grinding drums and guttural growls. While the guitar segments never fail to generate the innovative riffs, the majority of the riff pattern have a visceral quality. The third album lays its strength on the bizarre riffs and the sound production is very clear. The album cover is inspired by the grotesque art of H.R. Giger and it’s connected to the sheer alien design of the Xenomorph.

Sonically Planetary Clairvoyance has many groove sections and the intricate riff patterns include some fabulous leads and solos. Tomb Mold have aptly molded the song structures by introducing some unexpected elements. The drums and the twisted style of riffs still remain the mainstay of the band. Infinite Resurrection presents a dose of distorted death metal riffs and the flawless solos give an extra impetus to this outstanding track. The third output is chaotic and modulated, even though brutality was never the main trait of the band. There are no structural changes concerning the songwriting, but these changes were forced to bring new ideas to implementation.

Accelerative Phenomenae is one of the standout tracks injected with chunky guitar riffs where the band reveals their good understanding of its musical capabilities. The incredible heaviness and jaw dropping riffs are delivered with excellent qualities. Through the fluctuating blast of drums and the monstrous growls which raises the effect of each of the six tracks Tomb Mold seems to be on the top of their game. These attributes are what makes them one of the old school death metal bands and on the third album they extend and rejuvenate their identity by improving the level of efficiency.

The latest installment from the Canadian death metal act is a constant grower and a natural progression from the sophomore. Instead on relying on brutality or an excessive dose of blast beasts the band simply displays greater skills on the riff section. Planetary Clairvoyance is loaded with massive jarring riffs as they clearly reflect on their alien kind of music. The progression is achieved by the solid and unrefined guitar riffs, the opening riff on Cerulean Salvation is very captivating while the inhuman growls add the brutal sound.

The track was previously featured on the E.P. that was released last year and it begins with lashing guitar riffs and mid pacing drums backed by the low guttural growls. Planetary Clairvoyance is ridden with the putrid sense of old school death metal. The final track Heat Death is shed upon the disharmonious guitar riffs and blast beats which incorporate the raw standards of the Finnish death metal. The track also features a lengthy portion of intricate led guitars propped by the low guttural growls. Tomb Mold new album is ridden with the putrid methods of old school death metal. This is absolutely a great record.