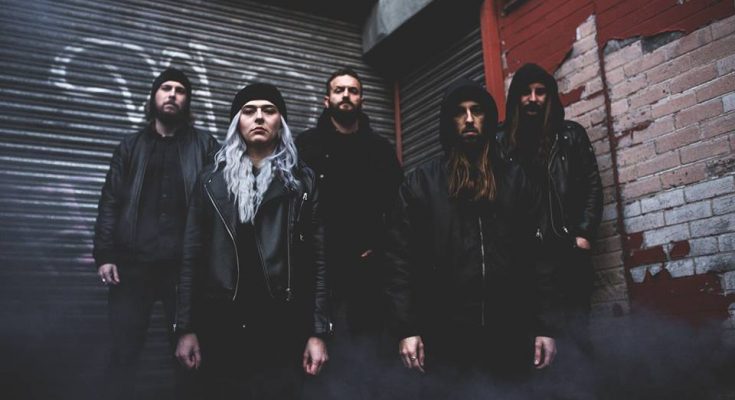 A few years back, the UK-based death metal band Venom Prison surprised friend and foe with an impressive piece of work. Their debut release blew the minds of many people and not just for its absolute brutality! For a death metal outfit they also decided to tackle topics that are not so common in the genre: female empowerment and being outspoken against sexual abuse & rape… When they came in the neighborhood on their tour supporting Trivium with Power Trip, I really wanted to go and have a talk with them. So there I was: after a cold trip through Finnish winter weather, in the tour bus joined by vocalist Larissa Stupar… 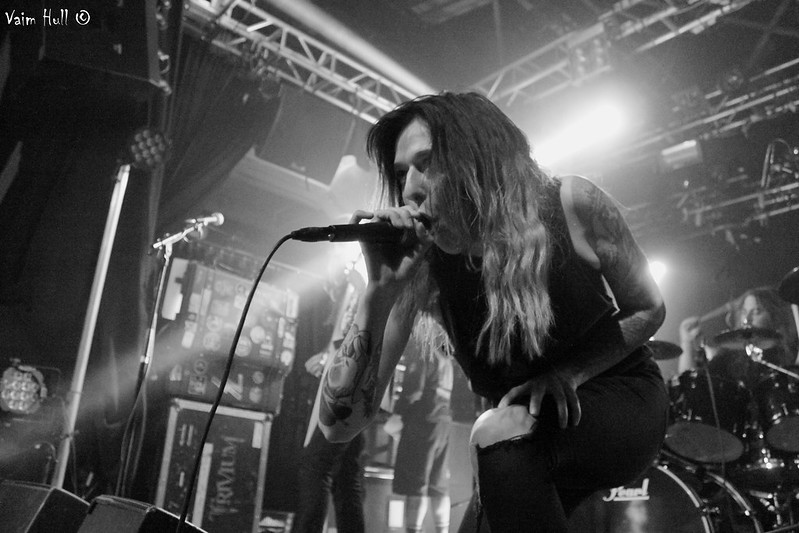 Nice to meet you! How are you?
Euhm, I’m tired. We had a day off yesterday and we had to travel from Stockholm to Helsinki. We took the ferry and yeah… the food was shitty, couldn’t sleep… so here I am!

You’ve been touring now with Trivium and Power Trip. How has it been for now?
It’s really cool, actually. We’re sharing the bus with Power Trip and as soon as we met and introduced ourselves, we picked them from the airport, it was like we knew each other for years! Really cool people, I enjoy the bands live everyday, it doesn’t get boring at all. For us it’s a bit different because I think Power Trip and us are a bit more extreme than Trivium, so we’re playing for a completely new audience, which is quite exciting!

I can imagine so. Do you see it as a strength that you’re more heavy and harsh?
(laughs) Yeah…

Somewhere I read that Power Trip was asked by Matt (K. Heafy, singer of Trivium) himself. Did it work the same way with you guys?
Yeah, it worked the same. I think Merlin from Metal Hammer UK showed him Venom Prison and was like “check this out” and he did and then he asked us if we wanted to go on tour with them. So we were like “fuck yeah!”

I only recently checked out your debut album Animus, that was released in 2016. I have the impression that it was quite a surprise in the scene, how are you looking back at those reactions?
When we released we didn’t really think something big was going to happen. We obviously liked what we did, we wanted to put it out. And then all of a sudden we’re on a tour with Trivium like 2 years after, we got a Metal Hammer Golden Gods award and we played many amazing tours with pretty cool bands. Yeah, we’re still surprised but we’re looking forward to what the future may hold for us with album number 2.

While we’re on it anyway: how is it going with the follow-up album?
Yeah, we’re going to be recording in the end of July, I think. So, we’re just tweaking some little bits and finishing of the pre-productions.

Something to look forward then! Now, you have a history in hardcore and now you’re doing really harsh metal in which you can still hear those hardcore influences. Would you ever consider going back to the pure hardcore music?
(sighs) I don’t think so. Like, I love hardcore to this day and it’s been my companion for such a long time. But it’s just… how do I say?…it’s just not giving me enough, there’s more exciting things. And extreme metal, death metal, black metal,… all these influences, if you take just a little bit of everything, you can just have something really exciting and really cool. And that’s where we’re going, that’s where we started, that’s where we continue…

One of the things that has been talked about a lot, is that Venom Prison in quite some songs speaks out really strongly against sexual violence and rape. That of course got me wondering how you’re looking at all the things that are happening now and revealed after the whole Hollywood scandal.
Yeah, it’s a good thing it’s happening ’cause people have been silent for such a long time as it seems. And I think everyone knew kind of what was going on. Like, people within the music industry knew about these things going and I’m pretty sure people in Hollywood knew as well. But now finally, survivors and women and people who support these women had the courage to speak up. And I think this is something really good and positive and I think it’s going to turn things better.

Yeah, true. What always gets me wondering a bit, isn’t there a danger of things going too far? That it turns into a witch-hunt so to say…
Yeah, obviously things need to be proven. It’s not a positive thing if someone just misuses it, like just for their own sake because they want revenge on someone for whatever reason. But generally I think we should believe victims and survivors of rape and then see where we go from there. There has been cases as well, where it’s been not as bad as it was made out to be or maybe just nothing happened at all and in the end there were cases where it was revealed it was false as well.

Some weeks ago it was “international women’s day” and I saw a quite hilarious video by the Butcher Babies in which they were making a joke about always getting asked how it is to be a girl in a band. Is that a question you’re still getting a lot?
I actually only got this question once. I was always making jokes like “I’ve never been asked this question, how funny!” and then someone asked me this question. And I really didn’t know what to say cause I’m like “why are you still asking this?”. I think everyone today knows it makes absolutely no difference. So when I was asked I just said “I don’t know what it’s like to be a man in the metal scene”, that’s all I can say because we all experience things differently and we experience things the same as well. So everyone can only speak for themselves…

You’re also quite outspoken anti-fascist, which got me wondering what you think about what lately is happening with all the boycots of antifa…
There’s been a few things going on. I know, sometimes I think you can separate the art from the artist and sometimes you can’t because this is just what it’s made out to be. I have to admit that some questionable musicians make really good music and that I listen to it myself. Though I probably wouldn’t wear a t-shirt or not support them in a way like that. And I think that’s what most people do. But some people decide to share the opinions that are being shared in the music and that’s something I don’t agree with.

Of course, I was just wondering because they sometimes attack black metal bands just simply because they’re “black metal”…
Yeah, that’s just absolutely wrong. Black metal can be influenced by so many things. Just because there has been artist in the past or maybe traditionally there has been some things, it doesn’t mean that they can’t progress. Everything progresses within time, so does black metal.

That’s a nice thing to hear because in a lot of cases it seems like they’re looking at something happened 20 years ago and just decide that because of that one thing they’re bad or fascist.
Yeah, people should like seek conversations with artists. Because if they really want to know what they think about certain things, they could just ask them. And I’m pretty sure they’re gonna say what they actually believe in.

Yeah, like with the most recent case with all the Taake troubles in the States where gigs get cancelled even though he said “I’m not like that!”
Yeah, and that was like over 10 years ago, so… and maybe even if he was like that 10 years ago, it’s been 10 years. Some people do change…

It’s sad that a lot of their gigs were cancelled because of all the threats and such against them, venues and their fans.
Yeah. Sometimes even when I’ve been listening to some bands for awhile and I discover t-shirts of them that have like questionable sentences written on them, then I’m like “oh fuck! yeah…” (laughs) Sometimes you just don’t know.

Now back for a bit to that new album you’re writing: with the first album there weren’t really any expectations but now there are. Does that put a lot of pressure on you guys?
Yeah, I would say so definitely. But in a positive way because most of us work better under pressure when something need to be proven. You need to put that work in and that’s something we’ve managed to do well the past few months. The pressure is now to finish the songs in time before we can record them. Because we’re on this tour for 44 days, then we go back home for 4 weeks to then go to America for 5 weeks and when we return we have 3 or 4 weeks and then we record. So everything needs to be finished by that time (laughs)

Some healthy stress there indeed! I also seem to understand that you’re vegan, is that still something troublesome while being on the road?
Euhm, it’s not troublesome anymore, I would say. Most places are really prepared. There’s like lots of vegan options on the menus and in the catering and stuff like that. The only problem is if you have to stop somewhere on the days off and have to eat. So the only thing I usually do is like McDonalds where you can have fries… (laughs)

And while you guys are being on the road, what kind of music is played here or do you listen to?
We’ve listened to the new Judas Priest album which we, I think, all of us really liked. I personally listen to less heavy things on tour because I’m surrounded by noise and loudness and extreme music everyday. So when you just want to have time for yourself, you just listen to some quiet stuff. I’ve been listening to quite some jazz lately…

Would there be any band you’d want to give a shout-out to? Like “hey, check these guys our!”
Euhm, Conjurer from the UK. They just released a new album. It’s like doomy black metal, it’s quite cool. You should definitely check them out!

We will! To end our chat: is there anything you want to add still to our readers and your fans?
Ah, I’m really bad at these! (laughs) Maybe check out Power Trip and Venom Prison next time we’re here?

People should! Thank you for the nice talk!