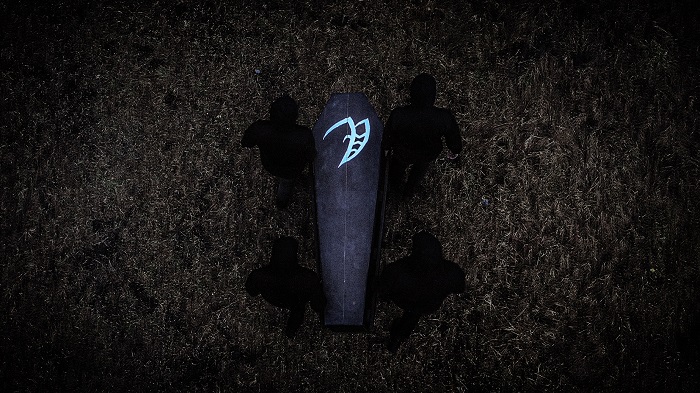 The song “Into the Mountains” is a homage to the Sognametal spirit and legacy. The ideas for that track were written in 2002 by Jarle ‘Hváll’ Kvåle and Terje ‘Valfar’ Bakken (WINDIR). Inspired by these ideas, Hváll wrote the song and included the original demo keyboard tracks from 2002, recorded back then by Valfar.

“Into the Mountains is the essence of Sognametal, a hymn to Sogndal and a celebration of our ancestors and legacy. Late winter 2020 preparing for the new album, I went through my old recording hard discs and I found some old ideas for riffs that I had made in 2002. It was from a session between the ‘1184’ and ‘Likferd’ albums from WINDIR. I also found some unused keyboard parts recorded by Valfar from the same period. I could not remember these and became euphoric by rediscovering this. So, I blocked out the outside world, locked myself in the studio, and it instantly sent me 20 years back in time. I felt spellbound while working on this song. For a few days it felt like me and Valfar were working together in the studio again, and what a weird and fantastic session it was. The dynamic of working together with Valfar is something that I will always miss, and these strange days it felt like journeying into a lost time. The result of this session is “Into the Mountains”, a song that feels so pure, fresh and vital for us, yet with a great homage to our olden times. Life is a strange and curvy road.”

Watch the video at the official Season of Mist Youtube Channel HERE. The music video is also a chapter of the band’s unique and ambitious movie project ‘Wild North West‘.

‘Wild North West‘ is a concept album that developed alongside an entire movie. Throughout eight chapters the listener will be taken on a journey deep into the mountains, to a dark place where the borders between reality and fantasy fade and where death is only one step behind you: The Wild North West.

‘Wild North West‘ will be released on April 30th via Season of Mist in various formats. Pre-orders are available HERE.