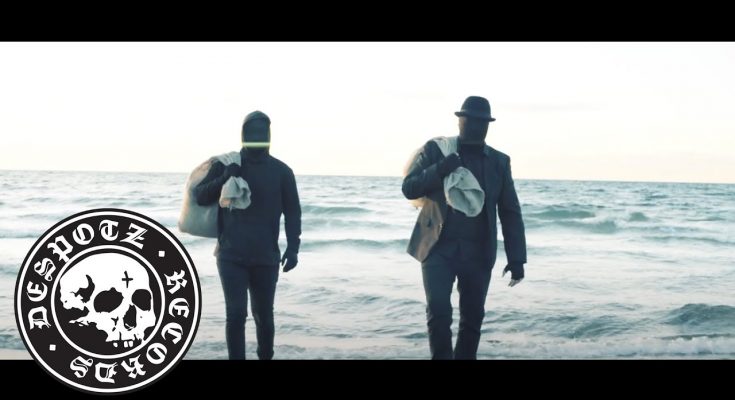 Imagine a blackened sound that claws at your very soul, a powerful, intense, swirling mass of energy emanating from your speakers, like the coming of the Four Horsemen of the Apocalypse heralding the end of the world. Except there’s only two of them, and they hail from Denmark.

Angstskríg are a secretive duo, shrouded in mystery and who protect their anonymity fiercely but they are already able to boast a number of powerful allies from already established metal legends. After opening the door into their bleak world with debut single ‘Lucifer Kalder’, mysterious Danish black n roll band Angstskríg return with another slice of epic, dark brutality. Joining them on ‘Skyggespil’ (Danish for shadow play), is none other than Attila Vörös, (Satyricon, Sanctuary, Tyr and Nevermore) who has added a suitably aggressive guitar work to proceedings. As Angstskríg continue to prepare the world for their upcoming debut album, ‘Skyggespil’, will leave those brave enough to listen in no doubt that a new, dark and brooding force is coming…

Angstskríg about the music video;

“The black wanderers continue their journey through the Nordic wonderland. From bright, snow-covered, frozen lakes into the darkness of the cave, where shadows roam. Do we believe in shadows? Or do we step out of the cave and into the light? ‘Skyggespil’ (‘Shadow play’) is both the title track and the album opener, so there’s a lot of pressure on this precious melody. However, it displays a variety of elements that are key to Angstskríg’s eclectic, yet, particular Nordic flavour, which obviously goes perfectly with Attila Vörös’ tasty Hungarian seasoning.”

In the latter part of 2019, Angstskríg summoned, felt inspired and rapidly wrote their debut offering ‘Skyggespil‘ (Danish for ‘shadow play’), which was recorded in Hikikomori Studio with producer Frederik Brandt Jakobsen at the helm. It was by his hand Angstskríg’s particular take on the Nordic sound took form. To, furthermore, give a very diverse album even more assorted flavors, the duo called upon gifted musical comrades to take part in the creation of ‘Skyggespil’ and, thereby, elevating the songs to new levels. In spring of 2020, to take necessary steps towards fulfilling their aspirations and meeting their expectations, the duo expanded their circle of trust with strong and crucial allies. In other words, the seeds of a fruitful future had been sown.

Yet, the story about Angstskríg took its beginning decades earlier, some time towards the end of the last millennium. From a young age the duo were taken under the wing of a common mentor, under who’s guidance they taught themselves how to play. How to perform. How to create. How to be artistically curious. How to express themselves. How to challenge boundaries and convictions. Although the steps in the very beginning were small, this marked the offset of the musical journey of the duo. Though life separated the two and took them down diverging paths, where one pursued the road of knowledge, the other a path of entertainment, they never lost touch, and the idea to reunite at some point remained prevalent. So after gaining a decade of invaluable experiences and due to their respective paths taking new dramatic turns, the time was ripe to create, what would become Angstskríg.