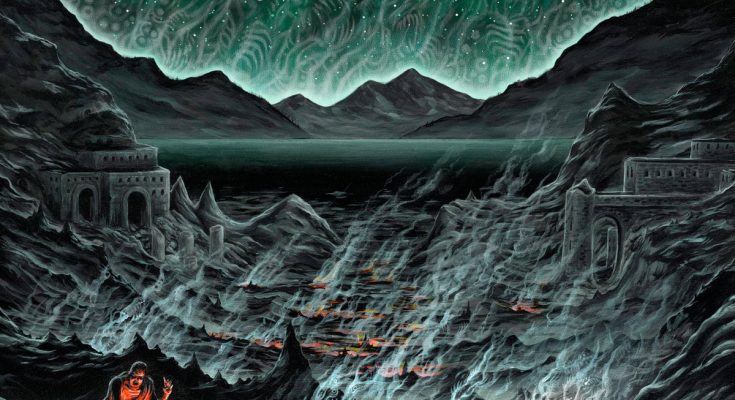 20 Buck Spin are one of the biggest record labels in introducing and signing new bands that play old school death metal in the USA. The label has been consistent in selecting the best bands to their roster and delivering good quality music. For the past few years this label has built a strong reputation in the extreme underground market by competing with other underground labels. 20 Buck Spin has played a big role in promoting many bands like Tomb Mold, Scorched, Acephalix, Superstition and many more who have joined their roster in the past few years. It seems that the best selection from the US death metal bands nowadays comes directly from Dark Descent Records and the aforementioned label. After successful releases from the above bands 20 Buck Spin brings to us the sophomore album from Portland, Oregon death metal band Witch Vomit.

This four piece band is a prime example of a band that doesn’t sound quite typically like other old school death metal bands from the USA. Witch Vomit initiated in 2012 by releasing their demo rehearsal Drowned in Filth. Two years later they released their EP but they remained unknown to the underground scene until they released their debut through Memento Mori ,A Scream from the Womb Below, in 2016. It was around the time when the band became fully recognized and made a good impact in the extreme underground scene.

And much like the debut the sophomore album Buried Deep in a Bottomless Grave shows a solid progression not only in songwriting but also in sound quality. And that’s what debut mostly lacked. The compelling force mainly comes from the chainsaw guitar riffs, triggered with tremolos and quite fitting guttural growls. The influence of the Swedish old school death metal has shaped the new material into a crushing record of putrid death metal. The escalation grows intense with the first track From Rotten Guts where the band consolidates the elements from early Autopsy. The guitar leads are notable and they provide some crushing riffs and melodies that can be heard on other tracks. Buried Deep in a bottomless Grave features two members from the U.S. death metal band Torture Rack on vocals/guitar and bass.

The majority of the tracks on the album are deeply soaked in rotten old school death metal fashion. The good thing about the band is that they don’t emphasize on blast beats. Witch Vomit prefers the mid-paced speed while the vocals are in the guttural style. The band is an excellent mix of early Autopsy meets Swedish death metal. The band still applies the slow doom sections by showing their influences from Incantation. Witch Vomit seems to put a lot of effort and exertion in the guitar riffs, the drums keeps the pace steady and delivers a great performance on the second track Despoilment.

It may take a few attempts for a band to reach to a certain level of competency but I can say that Witch Vomit has perfected its sound on its sophomore release. Between faster songs and crushing slow mid pacing the tracks have many tempo changes. The album title is a standout track bursting with violent riffs and hammering drums. What grabbed me most is the vocals performance and guitar riffs affirming on tremolo picking. On the fourth track Dead Vein Witch Vomit swaggers with its heavy riff arrangements and bursts with frenetic melodies by adding a sense of doom. Building on the atmosphere of doom metal shows how they have a variant way of approaching the influences that previously became apparent on the debut.

Dripping Tomb begins with abrasive blast beats before the track morphs into a mid paced style and creates that cavernous effect of death metal. Witch Vomit still delivers many sharp, catchy riffs and lead guitars. Buried Deep in a Bottomless Grave maintains an excellent level of performance. The clear sound production has given the tracks full energy with skillfully arranged instrumentation . The new material feels natural and stands firmly on the raw foundations of death metal.

On the sophomore release they take a further step towards improveming themselves and I’m certain that the latest effort will be highly praised by fans of death metal. I never doubted or felt any uncertainty regarding its release. Witch Vomit has developed quite much from the debut and I’m glad that the band has delivered an excellent record. Buried Deep in a Bottomless Grave will surely show up on my list of favorite death metal albums of this year and will be played frequently for weeks if not months.