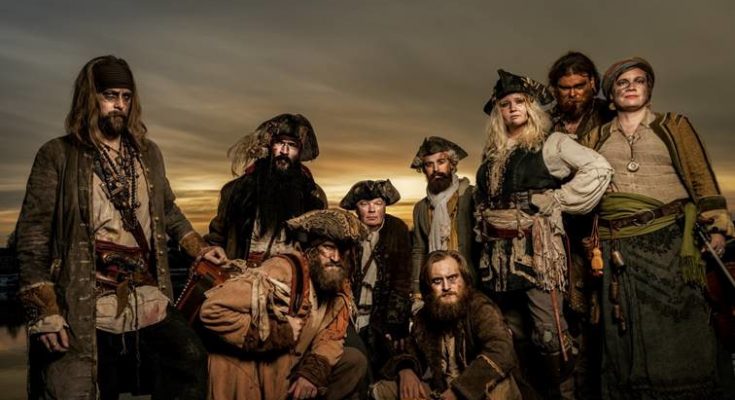 Batten down the hatches! The Swedish pirate crew strikes again with the second single from their upcoming album, Hostis Humani Generis – and this time, it’s either sail or die! Accompanied by a (quite literally) bloody atmospheric lyric video, “Elephants’ Dance” depicts struggles of the free-spirited sailors, trapped between their brutal independence and the authorities, imprisoning them in the endless maze of laws and decrees.

Led through a blood-stained map, the viewer, like the pirates themselves, faces the same challenges that await the crew in “Elephants’ Dance”. As death threatens them from both sides of this ongoing conflict, the wild and free “children of the sea” choose the side people of Nassau, their long-time safe haven on Bahamas, over the power of the Crown. Throwing all the rules overboard and breaking free from steady land, YE BANISHED PRIVATEERS find their way in the storm, setting course for the next adventure.

Crude, unmistakably folky, and honest to the bone – “Elephants’ Dance” is not only a worthy representative of the upcoming album, but the next pirate anthem of the group itself!

We are born of the salt, we are children of the sea
We don’t bend our knees to no king or country

“According to an old African saying, when the elephants dance – it’s the grass that gets trampled.

British sailors bled for Queen Anne during the war of the Spanish Succession, was dismissed by King George after the treaty of Utrecht, only to be drafted as cannon fodder again during the War of the Quadruple Alliance.

With “Elephants’ Dance” we tell the story of those sailors who had enough and went on the account in the self-proclaimed pirate colony of Nassau. There, Governor Woodes Rogers landed in 1718 with an offer and an ultimatum: Lay down your arms and become a law obiding British citizen again, and all your crimes will be pardoned. Refuse, and you shall be hunted down and stand trial for piracy.”

“It is with great pride that we present to you our fourth full length album – Hostis Humani Generis! Over the course of 13 songs (well, 15 if you get the deluxe box) we tell the immersive story of a delinquent pirate crew, the downfall of the pirate republic of Nassau, and the end of the Golden Age of Piracy. We are immensely happy that the time has finally come to share this with you all, and we really hope you like it as much as we do!”

Hostis Humani Generis will be available in the following formats: