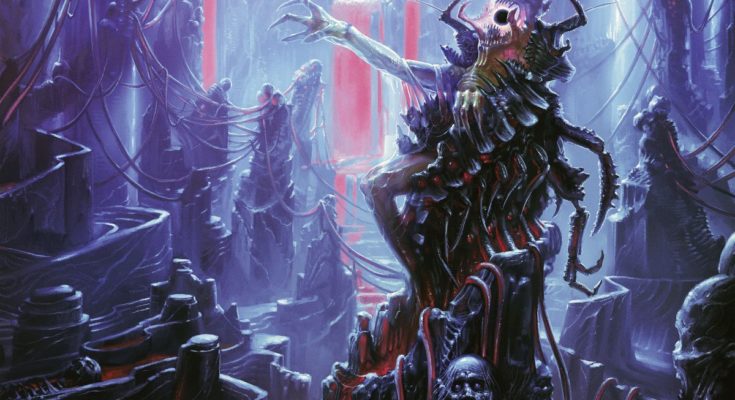 Death metal titans Abysmal Dawn quickly distinguished themselves from the currents of modern death metal bands. After seventeen years’ experience the Californian quartet brought a certain uniqueness to technical death metal, doing so in an age where modern death metal bands compete for our attention. ‘Phylogenesis‘ has been long-anticipated and, despite the six years of continuous touring and lineup changes, Abysmal Dawn has finally returned. The current lineup includes vocalist/guitarist Charles Elliott, bassist/vocalist Eliseo Garcia, guitarist Vito Petroni and drummer James Coppolino. Abysmal Dawn‘s level of technicality, already evident on ‘Leveling the Plane of Existence’ and ‘Obsolescence’, has even further improved on this new offering. ‘Phylogenesis‘ retains the massive impact of riffs and the mechanical power of percussion.

The growls and the rambling grooves are well fitted and seamlessly combined into the formula. The fifth album is a solid continuation from the fourth effort ‘Obsolescence‘ with the effect of the kinetic energy and the swift lightning solos. The opening track ‘Mundane Existence‘ meanders through the twisting technicality and meaty riffs carried in this distinctive genre. There is a considerable amount of fast solos that appear on each track of the album, the band further demonstrating their flair for the technical. Yet the following track ‘The Path of the Totalitarian‘ is a cohesive juggernaut of ballistic riffs, proving that Abysmal Dawn‘s style of death metal doesn’t merely rely upon on complexity.

The extreme and brutal take on tech death here is based on the same formula the band has presented before. Although the songs seem to be renewing the architecture of crunchy riffs, they have enlarged the song-structures with excellent guitar solos. ‘Hedonistic‘ instantly moves into grooves and heavy riff pacing, as the drums operate like a machine gun. ‘Phylogenesis‘ is an oeuvre of flexibility. The band choose to focus on aggression and brutality rather than swaggering with sheer technicality, despite its obviousness. They have found the right balance to inject brutality into riffs. This is why the songs here have a crunchy sound. Aside from stylistic touches their main influence comes from the U.S. death metal bands such as Morbid Angel and even the Swedish Bloodbath.

‘Phylogenesis‘ is furiously brutal and offers a chunky platter of riffs and blast beats. ‘A Speck in the Fabric of Eternity‘ apparently features a new trademark style of grooves and brutality, and the guitar licks add some flavor to the songs. While their progression wasn’t always as rapid, the U.S. quartet established a modernistic form of tech death. Now despite minor changes here and there, ‘Phylogenesis‘ offers energetic chemistry between drums and guitars.

There are a few tracks that actually present an acute sound, but other tracks such as ‘Coerced Evolution‘ contain intensely mechanical riffs. Meanwhile, other tracks immediately take a transitional shift towards brutality, which is mainly achieved through relentless blast beats. And because the drums on the album are among its strongest components, the monstrous growls intensify brutality. For example, the sixth track ‘True To the Blind’ follows this pattern of massive aggression.

The sci-fi themes of the album cover, like their previous records, evoke the alien architectural fantasy of a dystopian future conquered by aliens and technology. Abysmal Dawn manage to implement these sophisticated themes into their sound. ‘Soul-Sick Nation‘ is triggered between grooves, dual growls, mid-pacing riffs, and is powered by the supercharged battery. There are many technical death metal bands such as Obscura and Beyond Creation who brought variety to their sound. But Abysmal Dawn has maintained a close connection preferring a simplistic take.

One of the most intense tracks achieved by complex arrangements is ‘The Lament Configuration‘. Its immensity resonates through intense riffs and double kicks, and a throbbing cataclysmically amplified bass. The album also features a killer cover song of ‘Flattering of Emotions‘ by the legendary Death.

One thought on “Abysmal Dawn – Phylogenesis”