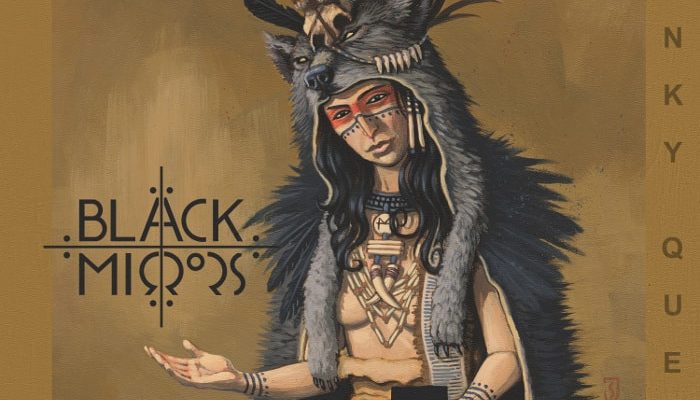 People are dubbing Black Mirrors to be Belgium’s answer to pretty much every rock band out there. The female fronted 4-piece rock band hails from Brussels and they themselves call the style of the band  garage rock with influences of Janis Joplin, Jack White and Queen Of The Stone Age, just to name a few. They managed to convince Napalm Records of their promise for greatness and released an EP called Funky Queen through them.

Without a doubt this is a band we’ll have to keep an eye on. The EP opens immediately with the strongest song on the release: title track Funky Queen. A very bluesy & groovy rocker of a song that brims with an “oldie” sound, together with the vocals by Marcella Di Troia it could remind you very much of the highly popular Blues Pills. They still have their own distinct sound with a cool stoner touch to the music. And at the moment this sounds just better, more raw and honest than Blues Pills‘ latest effort. Black Mirrors‘ attitude overall reminds me of the first coming to surface of that other vintage rock band.

Second song on the album is a cover of Kick Out The Jam by MC5. It’s not bad, with again their own stoner touch to it, but honestly I would’ve liked a bit more power in this. The original is a whirlwind of anarchy and power and their version just doesn’t do it for me really. The Mess is less strong than the first track, but is still a very decent song, lowering the tempo to a more trudging stoner/desert pace that’ll still make you nod along. Last song Canard Vengeur Masqué is another more slow song, but again really high quality stuff here. A nice little touch for me is the artwork that depicts a Native American woman wearing a sort of warpaint, which looks very much in the direction of what Marcella wears when performing.

It’s quite clear why Napalm Records saw bread in this little upcoming Belgian rock band. Black Mirrors has a front lady with quite an impressive voice and the musicians know how to compose rocking music. You might wonder if they’re maybe a tad bit too late to jump on the vintage rock train that has gotten popular not too long ago. But if they continue delivering the kind of stuff you can hear on Funky Queen, I’m pretty sure they’ll manage to make a name for themselves. Definitely a band to keep an eye on, try to catch them on their small tour if you can!