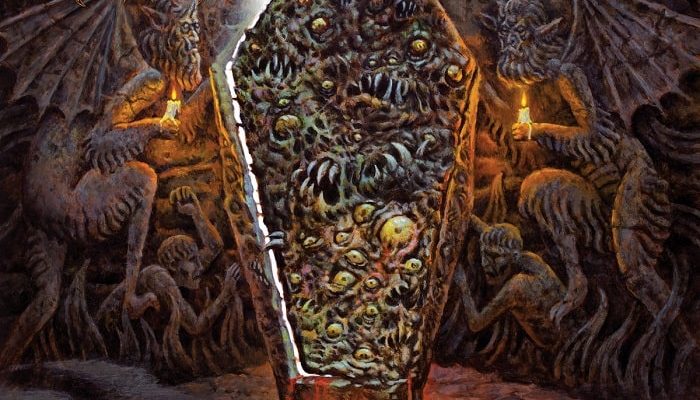 When Fernanda Lira and Luana Dametto quit Brazilian thrash outfit Nervosa last year, they did so in order to arise again under the new banner Crypta.  In a manner not dissimilar to their former thrash mates the two of them went looking across the world for their new fellow bandmates. The duo found a kindred soul across the pond in the Netherlands in Sonia Anubis aka Sonia Nusselder who had already earned her stripes  in none other than the similarly all female, mostly Swiss heavy metal champions Burning Witches. Joining Sonia on the six-string came Taina Bergamaschi, from the somewhat lesser known folk metal act Halberd.

Now just a year later the foursome has already penned their debut album. While you can still hear some of their thrashy roots seep through, Crypta is a decidedly different, more deathly beast. After a moody intro that doesn’t reveal too much of what you’re about to hear, the four girls truly kick off with their blistering single ‘Starvation’, a celebration of full on old school Florida style death metal. Fernanda Lira has obviously  taken her typical trademark biting snarls with her. Somewhere in between Chuck Schuldiner of Death and Destruction’s Schmier, they give a very old school almost proto death vibe to the songs. Interesting to note here in a reverse upside down kind of world that her former band’s replacement is seeing them now employ a range of really deep grunts, while still being very much a thrash band.

Luana Dametto had been playing with Fernanda as early as 2016 and you can hear that in just how solid and coherent their rhythm section is. The ideal foundation for the new girls to show their axe skills on. Sonia’s influence comes seeping through on the highly melodic ‘Possessed’ with some stellar guitar work. ‘Death Arcana’ then shows that Crypta is by no means a one trick pony, being a very epic mid tempo churner, followed by the chopping ‘Shadow Within’.

‘Under the Black Wings’ takes it down a notch or two speed wise before its lunges ahead again mid air with some savage soloing before it ends in another barbaric stomp. The debut doesn’t blow its load early on either, the two absolute highlights are tucked in near the end with the ridiculously catchy speed queen ‘Kali’ and ‘Dark Night of the Soul’ which opens with a menacingly atmospheric riff that has a fascinating oriental feel to it, while the aptly named ‘Blood Stained Heritage’ pays homage to their thrashier legacy.

‘From the Ashes’ brings closure to Crypta’s first full length, symbolically shutting up those who still regret the split within the Nervosa ranks and proving instead that 2 new fantastic bands have emerged from those embers.