On the seventh and eighth of April, the 21st edition of Durbuy Rock took place in the charming village of Bomal-sur-Ourthe. As you could read from our preview, we at GRIMM were really looking forward to this edition! A varied line-up and a great green festival location made Durbuy Rock the perfect start of the festival season. On top of that, we got warm and sunny weather. Happy faces everywhere!

But I must admit that Durbuy Rock didn’t kick off very cheerful for me. Thanks to the traffic jams between Brussels and Leuven, I arrived at least an hour later than expected at the festival site. I hoped to arrive in time for Arch Enemy. When I walked into the venue, the melodic death metal legends had only just started their set. And what a set it was! It had a nice balance between old and new songs. Arch Enemy made the temperatures rise with blistering guitar solos and their tireless energy. Even though the audience seemed to long for sleep, classics like Nemesis and We Will Rise resulted in fiery mosh pits and intense headbanging! Make sure to check out their latest DVD As The Stages Burn to get an impression of their live performances (see our review here)!

Waking up the next day at the charming small camping next to the Ourthe was a unique experience. Sunny weather, half- or still drunk people, kilts, drinking horns, jolly folk tunes to wake up to… Indeed, it was folk metal day! The first band I checked out was the Hungarian folk metal outfit Dalriada. Pretty sure I’ve heard their catchy folk tunes before… They definitely left an impression this time. Songs like Hajdútánc were very well received by the audience and I’m sure they gained many new fans.

Next up were the Finnish folk metal kings from Finntroll. It was without a doubt one of the most intense gigs of the festival. Their mix of icy black metal and jolly folk tunes captured the hearts of many visitors. It rained crowdsurfers and about every song resulted in a folk pit. Their setlist consisted of some songs from their latest Blodsvept album and older songs. They proved once again that Trollhammaren is one of the most popular tracks in today’s folk metal scene. I mean, just everyone sang and danced along to this one! Great gig, and many thanks go out to keyboard player Virta for throwing a bottle of water to me! It was very welcome.

The next band on the menu was our very own The Black Tartan Clan. They certainly caught the attention with their mix of bagpipes and punk. Both the band and the audience seemed to have a lot of fun! The penultimate band for the indoor stage are the New York based hardcore/punk legends of Sick Of It All. What an intense gig! The band unleashed its fury upon the audience with their aggressive riffs and singalong choruses. Fists went up into the air and some pretty nasty pits took place. It’s pretty impressive how they keep on conveying these huge amounts of energy after all those years.

Ensiferum closed the evening in their own recognizable style. I was lucky to have a little chat with them before the gig. All the band members were very tired from traveling and a lack of sleep, but as I expected, it was hardly noticeable when they entered the stage. Ensiferum is one of those bands that transfers their on stage energy to the audience. Classics like Lai Lai Hei and Token Of Time have stood the test of time and caused many folk pits. They also played some less typical Ensiferum songs like Two of Spades and Stone Cold Metal. Disco and country music at a metal festival? Why not, Ensiferum gets away with it! At the end of the gig, guitarist Markus Toivonen demonstrated his outstanding guitar skills by playing his guitar in his neck. These guys and gal really know how to party! 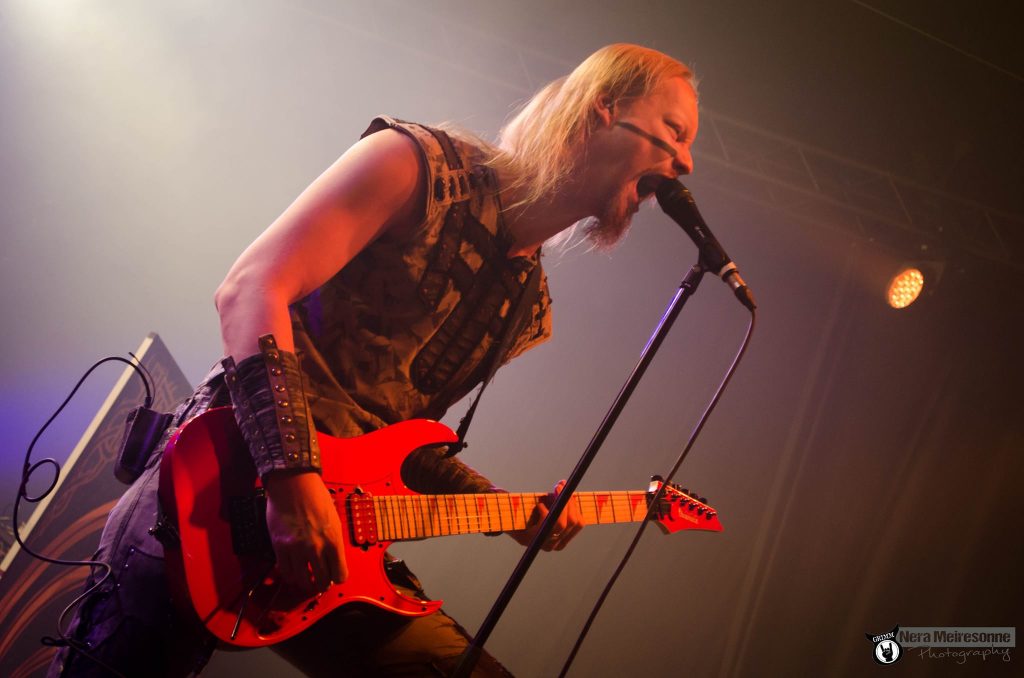 We from GRIMM kept on dancing but we were relieved as well that the evening had come to an end. What an intense, but mostly awesome weekend! Durbuy Rock spoiled us with great party hosts and we had a great time. See you next year, Durbuy!

To get a visual impression from the festival, check out the official aftermovie and our photo coverage!