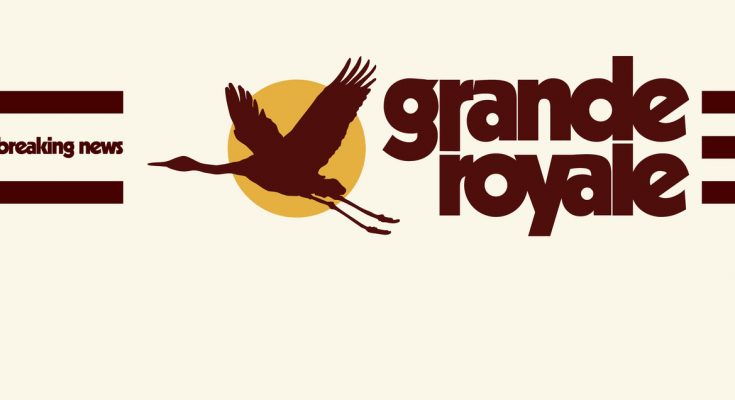 Swedish rock (‘n’ roll) outfit Grande Royale was an unknown phenomenon when the promo of their already third album Breaking News caught my eye. Always up for some old school rock ‘n’ roll, I decided to give these guys a try in the hope of finding another band to add to my “roadtrip music” playlist. The album was recorded and produced by country mate Nicke Andersson, known for his work with Grammy winning rock band The Hellacopters.

And that clearly left its marks on the recordings! Apparently Nicke was going through a Lynyrd Skynyrd obsessive period, an obsession shared by Grande Royale. It gave the whole album a very “Southern rock” touch, despite being from one of the Northern countries. Opening track Know It All immediately kicks off with a guitar solo, showing that they mean business. And business is good when we’re talking about rocking out! It’s groovy, catchy and damn smooth sailing from start to finish… Brake Light instead catches your attention with a nice bass line to immediately be followed by yet another energetic guitar groove. And I’m pretty sure soon you’ll be singing along to the chorus that “there’s no time to lose, no time to lose, yeah!”.

Just when you think you’ve heard their limit in being catchy, Grande Royale throws title track Breaking News at your head. Any rock radio station or any radio channel should just pick this song up and crank it up to 11, this could be an instant hit if enough people give it a chance. The rocking just keeps going to bring me to another song that caught my attention: Got to Move. A very good pick for one of their singles, cause this one really cranks up the energy to another level. It even somehow reminds me somewhat of some of Greenleaf‘s less heavy tracks, call it a “Greenleaf light” if you will…

The rock ‘n’ roll stays strong with another up-tempo One Second and especially, as the name itself already warned you about, R’N’R Business. Fans of the hard rock/rock ‘n’ roll genre will immediately have a light bulb popping up when hearing the opening guitar riffs. Yes, the godfathers of the rock ‘n’ roll/hard rock business AC/DC might have served as a bit of inspiration here… That slight recognition sticks throughout the song, but it’s still totally a Grande Royale song. Nowhere am I thinking “hey, this could just as well be a AC/DC track!”, just plain old rock ‘n’ roll like it’s supposed to be. Closing down with I’m On The Loose, singer Hampus gets to show off his vocal capabilities even more with an almost a capella opening that sends me vibes of Led Zeppelin and almost gives me goose bumps. A great opening for what feels like a more bluesy influenced rock song this time.

Grande Royale manage to capture a sound of Southern rock and rock ‘n’ roll on Breaking News without ever sounding “old” or boring. It’s the kind of music you can imagine yourself driving down a long road or highway on your way to nowhere. And on top of that they manage to add a level of catchiness and hooks that’ll get you singing along and tapping your feet in no time. In my honest opinion, this release actually gives them a shot at getting in some charts if enough people start to pick them up. Listening to their energetic rock was definitely a well spent half an hour!