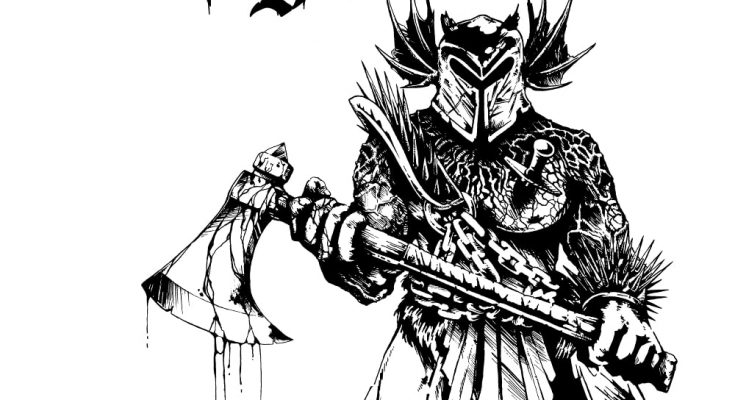 Last year I discovered the crazy hybrid that is Highrider through their EP Armageddon Rock (for the review go here). They boast to have a sound that is a mix of heavy metal, doom metal, 70s, punk and hardcore… and that’s exactly what their destructive sound contains. Now the Swedes managed to get a full record filled with their songs, baptized Roll for Initiative!

They kick off with Nihilist Lament without remorse: an opening riff that makes you think you’ve just entered the realm of old school thrash. When the vocalist starts to sing, a shot of angry hardcore shouting gets injected, screaming his lungs out like there’s no tomorrow. I presume after going through a whole setlist, they’re usually laying on the other side of the room in a miserable little heap. After his first line, their trademark organ sound joins the party and not much later there is some lovely chugging heavy metal riffs to be found. They opened at full gear, immediately giving you a good idea what they’re all about: they’re raw, pissed off and a furious force to be reckoned with… Batteries and Roll Dee Twenty are living proof of this besides the opening track.

In A Burial Scene they introduce some doom metal riffs that are just waltzing around with some slow rhythmic drums and eventually some really fitting organ sounds again. But as soon as you start thinking that this is going to be a slower song, they yank you out of those thoughts and throw you right back into the fray. The hardcore and punk infuses the ominous sound with an aggressiveness you don’t immediately connect with doom (and heavy) metal. The mix of certain metal genres with the hardcore vocals and attitude makes me more than often think of another of those creations, namely the black metal & hardcore fusing outfit Kvelertak. Especially this song really confirmed my feelings about this: Kvelertak with less black influences, the same raw and frantic energy and added organs.

Compared to their first release Armageddon Rock they clearly updated their songwriting and production quite a bit. While that EP didn’t completely convince me yet, the construction of the songs and overall sound really pulled me in this time. The larger production can definitely be heard on songs like The Greater Monkey, Vagina Al Dente and Emotional Werewolf, making these songs damn big and epic. The organ got brought more in the forefront here as well which give it a 70’s psychedelic vibe while still being heavy and raw.

Highrider delivered with their debut full release Roll for Initiative what I was hoping for last year. They cleaned up the production and sound without losing the destructive Armageddon of power of their music. If you’re any bit into (underground) heavy metal and the like, but with a very sturdy raw edge, don’t hesitate to check these dudes out! Without any doubt one of the freshest winds in heavy metal I’ve heard since long…