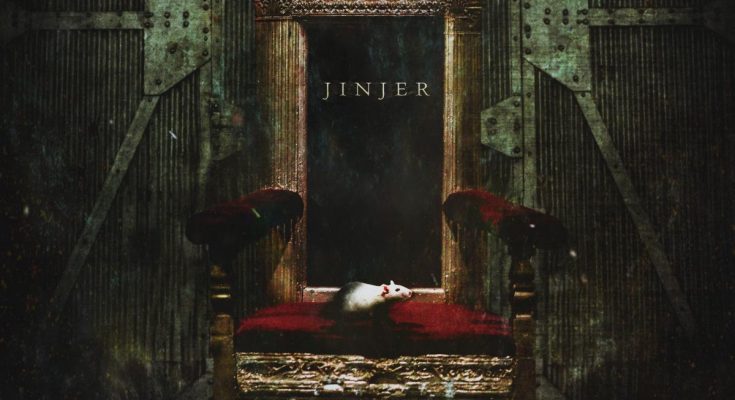 Jinjer is a band from Ukraine that went through quite a few line-up changes already. But with singer Tatiana Shmailyuk and the talented musicians that are backing her, they seem to take the nation by storm. With their 3rd release King Of Everything they’re looking to take on the rest of the world. With Napalm Records backing them, there’s nothing to hold the band back. The only question now is if their music is interesting enough…

I can already tell you that I’m convinced they shouldn’t have any troubles gaining a lot of souls! Jinjer describes its music as groove metal and it’s true that most of their music does have a very infectious groove to them. But in my opinion it’s way more than that. The musicians are really skilled in what they do, bringing a kind of metal that combines the best elements of groove metal, metalcore and hardcore, melodic death metal and progressive metal. The way they put the progressive touch to it makes me think of bands in the lines of Lamb Of God and Gojira: crazy bass lines, guitar riffs and drums without losing touch with the groove. And then I haven’t talked about Tatiana yet. Jinjer hates it to be called a ‘female fronted’ metal band because they feel like that term makes people think that the singer is a pretty and sweet lady flashing her goods. Frankly, I don’t care, cause her vocals are so versatile and impressive that anyone -male or female- should be jealous. The one minute she has a beautiful soulful voice and the next she’s grunting like a beast! Tatiana is simply the “Beauty and the Beast” in one. Some of her vocals make me think of bands like Arch Enemy and The Agonist, but then at the same time when she sings clean there’s often a hint of Otep and Sandra Nasic from Guano Apes. That last one is maybe not really a big surprise since she’s a huge fan of Sandra.

They open the release with a Prologue that brings us a nice atmospheric little intro to the album with that first hit of Tatiana‘s soulfull voice. Slowly building up, she seems to sing a line from every coming song almost like a preview of what is to come. As soon as Captain Clock kicks in, they don’t hold back and immediately turn up the heavy riffs and a face melting tempo. On top of that Tatiana opens the song with her beastly grunt that’ll make anyone tremble. Tempo changes, clean singing, screaming, a little breakdown and a big serving of melody and groove, the song has it all.

Next song Words Of Wisdom brings the same and more. It’s the first song of what I call the quartet of awesome and epicness! In my humble opinion the next 4 songs are the strongest on the release, probably not a coincidence that they’ve all been released as a video. Now, Words Of Wisdom opens hard and relentless and keeps this up throughout the whole track. This was the first song I’ve heard of Jinjer and it made me immediately look forward to the full release.

Just Another is the most recent song that got a video for it. The video consists fittingly of a mash up of live footage since I predict that this one might become a crowd favorite. The lyrics are relatively easy to pick up and there’s a midsection where I can see a huge circle pit appearing.

And then we come to the top of the bill: I Speak Astronomy. They released the video saying that this is a creation (video and song) in which they put all their heart, soul and energy. After what I’d call “space noise”, they blast into a progressive piece that almost even feels like djent. A nice groove gets added and Tatiana‘s clean vocals appear. The whole thing feels very mysterious and spacey, until she turns on her growls for a few lines. The whispering and almost crooning way of singing combined with a few lines of growling here and there continues. Until suddenly her voice turns almost ethereal and the music calms down for a bit under a minute. The heaviness gets picked up again a bit, but not as strong as earlier in the song. 5 minutes in the song seems to stop abruptly, but if you think the song is done, think again. It’s like Tatiana inhaled deeply to be able to belt out the most epic vocals of the whole record. When she opens up her lungs to full extent, it’s downright impressive. Really a topnotch song from a band with a shitload of talent and  potential!

Sit Stay Roll Over is an older song of Jinjer that was released already some time ago on an EP. The song sounds a bit more like their other earlier work and is heavy as fuck. Tatiana pulls you in with an all-devouring growl that’ll make you shiver with pleasure (or fear), backed with drum blasts and strong riffs. The pace is excruciating and you hear more of the hardcore/metalcore influences in the song than in any of the others on the album. The vocals are relentlessly vicious with growls, grunts and snarls like a wild animal. If there’s one feeling you’ll get when listening to Sit Stay Roll Over, it’s that there’s no way Jinjer is just going to do just that. Ideal song if you need to get pumped up for an upcoming “battle”!

The rest of the album has the same high quality of music, with which they could easily stand next to the big names in melodic death metal and metalcore. Pisces has a really interesting dynamic with vocals going from “shy little girl” to again “beastly woman”. The very last song, Beggar’s Dance, just has to be mentioned still. There’s a groovy bass line with a bit of drums rolling in the background and Tatiana‘s soulful vocals. The song has a very funky/jazzy vibe to it and there are moments that I expected Tatiana to start scatting (which she gets actually close to near the end of the song). Weird little song to end such a monster of an album, but it every time brings a smile to my face. A nice little refreshing piece of music you wouldn’t expect.

To end my lengthy talk about King of Everything: please go check them out! With this album I believe Jinjer will put itself on the (international) metal map, kicking ass and taking names. They have talent through the roof and have the potential to become one of the “big names”. A 9/10 for one of the discoveries of the year for me!