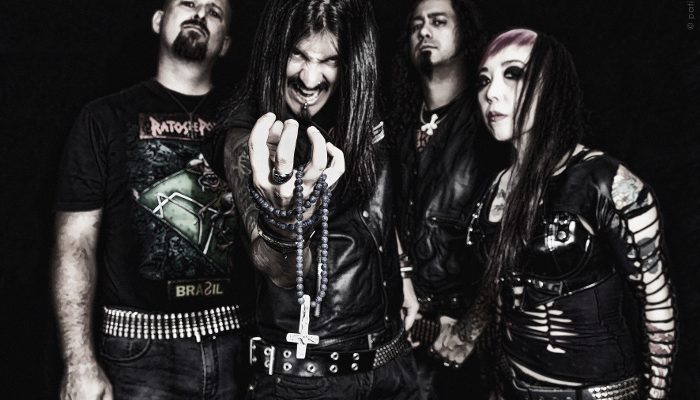 Born in spring of ’96, Brazilian extreme metal entity Nervochaos started creating an aggressive and chaotic kind of music. Over the past years, they gained cult status in the extreme music scene due to their hard work, offering a sonic extravaganza in an unique way that culminates in the band’s upcoming album called Nyctophilia. The seventh studio album by Nervochaos will be unleashed to the world on April 7, 2017 through Cogumelo (in Brazil) / Greyhaze (in USA/Europe) and distributed by Plastic Head (in Europe).

With an unrelenting urge for utter darkness, it marks the most morbid and intense release to date, where death-inhaling tracks like Moloch Rise or Ad Maiorem Satanae Gloriam arise from six feet under and showcase an eclectic mix of all that characterizes the band – 13 new tracks of 80s-fueled blackened extreme music, mercilessly executed in Nervochaos‘ trademarks: raw, aggressive and deadly.

They recorded the album outside of Brazil for the first time, with a new line up. Besides original founding member Edu Lane it features Lauro ‘Nightrealm’, Cherry and Thiago ‘Anduscias’. The release also features guest work by people like Sebastian L. (Into Darkness), Leandor P. (R.N.S.) and Bolverk (Ragnarok)! The album artwork was created by Alcides Burn, a talented Brazilian artist who has worked with acts like Blood Red Throne, Acheron and Iconoclasm. Today they released the lyric video for Moloch Rise and the tracklist. On another note: we can also soon expect another official video release, so keep an eye out for it on our site!