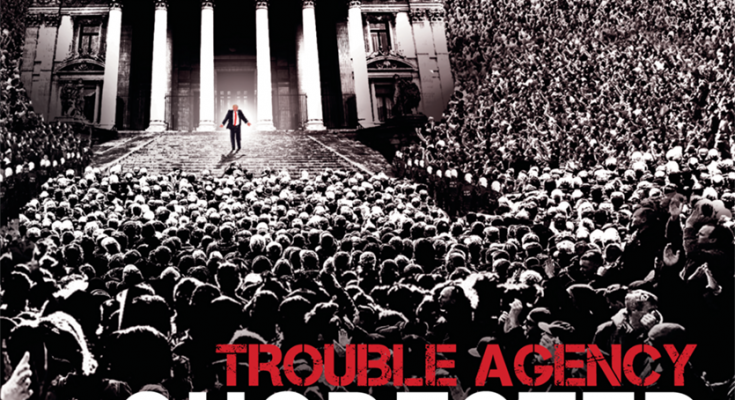 Trouble Agency is a Belgian thrash metal band from Brussels which was  formed back in 1993 and rose from the ashes of 80s thrash metal bands Cyclone and Decadence. Several line-up changes lead to that it took until 2006 before they released their debut album ‘Moneycracy‘ . That album was received very well by the public but didn’t lead to the big breakthrough. Trouble Agency is now back with a new one ‘Suspected‘ , a thrash album like a thrash album should be.

The first track Pawn Of God kicks off with typical thrash rhythms, you can hear that these dudes have already a lot of experience. It brings you immediately back to the glory days of thrash metal. Survival Of The Fittest starts with a groovy headbanging piece before continuing to break your neck. Sad is more a power ballad, it is the slowest song on the cd but therefore not the worst at all.

There are some more beauties on this disk, like What’s Done Is Done and the title song Suspected. It is up to the listener to discover which other excellent compositions are on it, I won’t tell you all, give it a spin. Every song is being excellently performed, great vocals, great guitar work, great drummer, but as the disk continues I have to say that I have the impression that Trouble Agency is repeating themselves a bit too much. A little bit more variation and this album would have been a classic.

Trouble Agency delivers a very strong album and would back in the late 80’s have been quite a hit. Today i don’t know, fans who love the old thrash area from the 80’s have to check them out , they will love it. On the other hand, I have the impression I have heard it all before, with such excellent musicians they should have the guts to stand out. It sounds too much playing on the safe side. Nevertheless fans of thrash of the 80’s will take this album as granted and not to forget, check them out at Jeugdhuis Asgaard on the 23th of March.