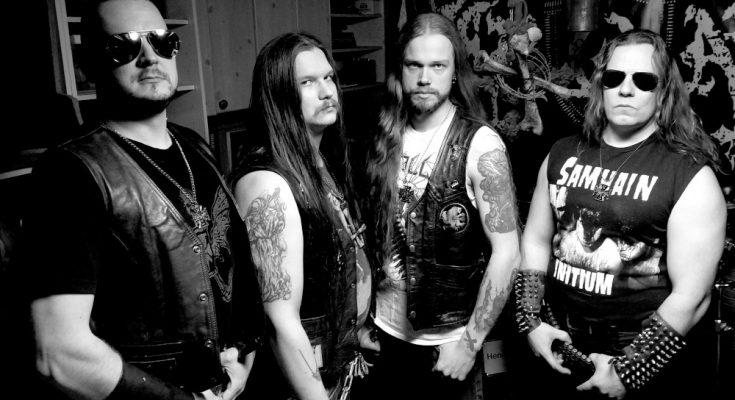 It’s been four long years since Front‘s celebrated debut album for Iron Bonehead , Iron Overkill. Firmly committed to the original war metal tenets laid down by Bestial Warlust and blitzing ’em to fuck in a manner most Marduk circa Panzer Divison Marduk, Iron Overkill was ever accurately titled: wave after undulating wave of teeth-gnashing speed and disgusting filth, all set to pulverizing stun, evoking an all-consuming sensation of total and utter oblivion. Now expanded to a quartet, Front are set to deliver their most complete statement yet, Antichrist Militia – which, paradoxically, is a swift ‘n’ decisive 23 minutes.

Sheering away the more conventional aspects of tried-and-true war metal in favor of time-honored heavy rock sleaze, Antichrist Militia is immediately a more memorable and altogether MEANER listen. The downshifts into headbanging moments infrequently found on Iron Overkill have been maximized here – and pumped full of nitrous. Just witness the Motörheaded charge of “Iron Front,” a fitting(ly filthy) tribute to their god Lemmy.

The cover art courtesy of the masterful Jenglot Hitam says everything it needs to: this is Front ravaging and rampaging the wastelands, veritable Road Warriors stocked full of black & death metal’s deadliest arsenal. Tighter, more finessed, but also more caustic, Antichrist Militia gets in and gets out with militaristic precision, this time with a booze-reeking smirk across its barbed-wired face. Call it “fun”…if you dare.

Think you’re fucking tough? Made of the sternest stuff? Then stand before Front and face the nuclear-powered force of their Antichrist Militia!

The full nuclear-powered force be faced exclusively HERE, courtesy of MetalBite.com. Aforementioned cover art as well as tracklisting are as follows: