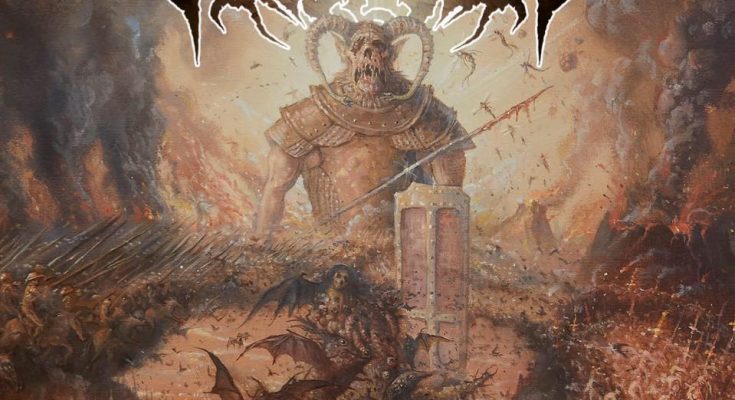 Firespawn is a Swedish super death metal project involving members from Entombed, Unleashed and Necrophobic. This project saw the light in the year 2015 when the band released their full length album Shadow Realms. Two years later the band released their second album The Reprobate. With veteran members selected from the Swedish underground scene such as LG-Petrov on vocals, Victor Brandt and Fredrik Folklare on guitars, Alex Friberg on bass and Matte Modin on drums. Firespawn focus on satanic lyrics and the brutal side of death metal, seemingly their music is more into the vein of bands like Morbid Angel, and Behemoth.

Abominate is the band’s third album and I must say that Firespawn shifted towards heavy riffage and striking drums. The basic formula which the band relies on is the power of driving riffs, piercing solos and the guitar hooks which the band became known for. Abominate begins with macabre intro, The Gallows End is a standard death metal track and in my opinion it’s the weakest track on the album. But despite of the moderate opening the song features some distinctive bass and solid guitar riffage.

Their music represents the dark aspects of death metal and brutality of the guitar riffs and melodies which are full of hooks. LG-Petrov‘s growls on the album are deep, devilish and brutally executed. In reference to the quality of musicianship the tracks on Abominate album are largely condensed into the mid tempo sections. Death And Damnation which is the second track contains many ripping guitar riffs and high level percussion. In some parts of the song you can hear the hammering drums and double kicks with solos thrown into the mix. Firespawn have refined the formula on the latest album, the third track Abominate will instantly smite you with heavy drum blows, extreme chunky riffs and semi technical guitar skills.

Generally the guitar work on the album is excellent, Firespawn are known for their musical ability and each album embodies high quality of solos. Even though the members are associated with bands that were classified as OSDM bands, Firespawn is more of a modern death metal band that incorporates brutality and grooves. Abominate somehow differs from the second album, there is a variety of riffs which makes every track sound very catchy. In some manner the blast beats are tempered, but this hasn’t really affected or reduced the brutal tone of the music. Heathen Blood, which contains some considerable amount of blast beats, also veers into the mid-pacing. And towards darker atmosphere and catchy solos Firespawn conjures the infernal feel on The Great One. This is one of their best tracks on the album with pummeling drums and double bass. LG-Petrov’s fiendish screams is one of the highlights, once the track begins to escalate the blast beats activate with full force. Abominate clearly shows that the band have explored newer boundaries and while The Reprobate album was overly brutal Abominate feels more balanced than the predecessors.

The band have built a constructive and steady sound on the record, bringing in the stomping guitar riffs, fast tempos and searing melodies. The influences from bands like Morbid Angel and Behemoth which appeared on the previous albums are less on the new album. The innovative touch of the strings adds a lot to the music on Cold Void which is a short instrumental track. It clearly shows that members have come up with more inspiration and while proceeding to The Haunter you can sense the improvement of the musical dynamics and quality. The skillful musicianship between Fredrik Folklare and Victor Brandt who perform fast and unexpected solos is cohesive. In addition the guitars are brilliantly fused into the songs, the heavy and striking riffs and rhythmical drum blows hits extremely hard on Godlessness.

Firespawn’s new album has equal stability and the musical scale this time is more fulfilled than the previous efforts. The vicious tone of Blind Kingdom contains a variety of brutal riffs, the oversized monstrous tone of the guitars and the modern production is the final highlight of this album. The Undertaker begins with scorching tremolos, the evil and menacing guitar notes which incarnates the style of black metal adds some variation. The gale of melodies can be distinguished from the chaotic turmoil and suddenly shifts into full mode of maniacal soloing.

There is definitely a consistent improvement in every album, and musically the record builds on the menacing atmosphere and melodies allowing the instruments to shine. Abominate is fabulous album and it’s almost brought to perfection, Firespawn has honed and refined their musical technique delivering the good quality of the modern and brutal death metal.

One thought on “Firespawn – Abominate”