Quite a part of the metal, rock and alternative scene are into some form of games, be it video games, board games or card games (or drinking games…). And there are actually games that play on the love for the heavier side of the music world. Just on the top of my head I could bring up the video games “Guitar Hero” and “Brutal Legend” or the Metallica version of Monopoly. Since we’re trying to support every part of our lovely community, here we are with a set of articles that’ll cover the game side under the form of news, announcements, reviews and possibly interviews with the brains behind all of the fun…

To start of this new segment on our site, we have our eyes set on 2 games right now that are upcoming. We’ll be getting them, put them to the test and bring our findings straight to you! And those games are…

Metal Tales: Fury of the Guitar Gods is a 3D shooter game for PC, a game from metalheads for metalheads. ‘Cause didn’t you always dream of saving the world with the help of your guitar, giving some bad ass guitar gods the low-down and fighting fierce riff battles alongside of your brothers and sisters in metal?  The game mixes metal with pure adrenaline, to deliver the ultimate 3D roguelike shooter. You’ll fight against the curse that affects your metal mates and free them from an ancient evil. This is a project by Spanish game developers Nuberu Games in cooperation with Kiss ltd. and will be available via Steam as of November 18.

What can you expect in the game?

Or as the game’s setting goes:

It’s Friday night, you are hanging around in your favorite bar, just to fuddle by the usual sounds of heavy metal that always smooth the way in your weekend. But something is strange – an unknown darkness taints the air and disturbs your salutary ritual. You are confronted by pure aggression that forces you to self-defend while your guitar transforms into a mystic rapid-fire-weapon. Enough – grab your six-string and defy the evil! Face the obsessed metal gods and deliver them from their sinister curse!

In other words: Gear Up For Battle! 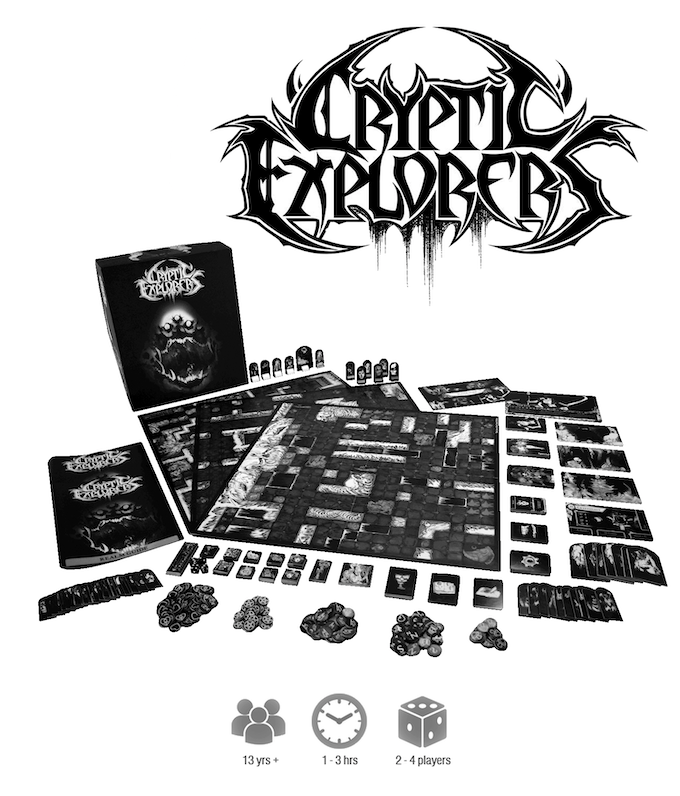 The second game is of a whole different caliber. We’re talking about Cryptic Explorers; a “competitive, asymmetrical, sci-fi & horror tabletop board game for 2-4 players” or like others dub it: “the black metal boardgame”, developed by Tempest Tome.

In Cryptic Explorers, 1 to 3 players take on the role of Cryptonauts (explorers of the unknown), tasked with entering the Realms of Death to steal occult knowledge, and escape back to Earth. Each Cryptonaut player customizes and controls their own squad of individual units. Opposing the Cryptonauts is a single Deity of Death player, a malicious and powerful Goddess who seeks to kill all the Cryptonauts before they can escape with her Realm’s occult secrets.

Cryptic Explorers has all the depth and asymmetrical overlord-vs-heroes play of a dungeon crawler like Descent, combined with squad-based tactics and unit customization (similar to XCOM), all rendered in a malevolent sci-fi / death metal / horror aesthetic. And what is even better, is that many of the artefacts and abilities used in the game have a reference to a metal band like Obituary, Mayhem, Entombed and the lot. So for the real lovers of extreme metal besides the atmosphere of death and malice, there’s a lot of little easter eggs to discover that might remind them of their favorite death/black/doom metal band!

The people behind the game have tested it thoroughly and are now ready to produce… but they need your help! So they started a Kickstarter campaign to gather the funds they’d need to be able to get the game to your doorstep. Definitely go check out what it’s all about, we’re already up for a pledge! Go to this link: Kickstarter link.

And if you need more convincing, here are a few quotes on the game that we found on the Kickstarter campaign:

“Everybody was really tuned in to see what horribleness was going to befall everybody… This is as Ameritrash as it gets!” ~ Lance Myxter, the Undead Viking, Tabletop Game Reviewer

“The most fun I’ve ever had killing my friends with demons!” ~ Peter Davis, Game Designer, Colorado Game Designers Guild

“A game that looks like NO other game out there… Dark, gorgeous, and unique art that sinks you into a game as thematic as it can be, backed up by solid gameplay that will keep you on the edge of the table. Go back it now!” ~ Vicente Sivera, Freelance Illustrator, Playtester

“Plunge into this brutal game of tactics and strategy… Countless ways to play, only one chance to win. Who’s prepared for Death!?” ~ Chad Shotton, Playtester 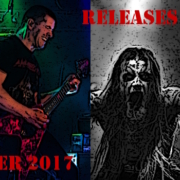 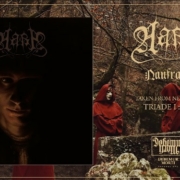 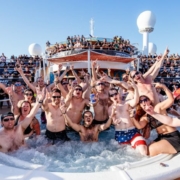 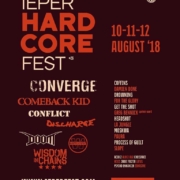 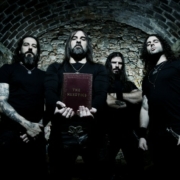 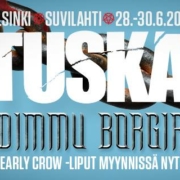