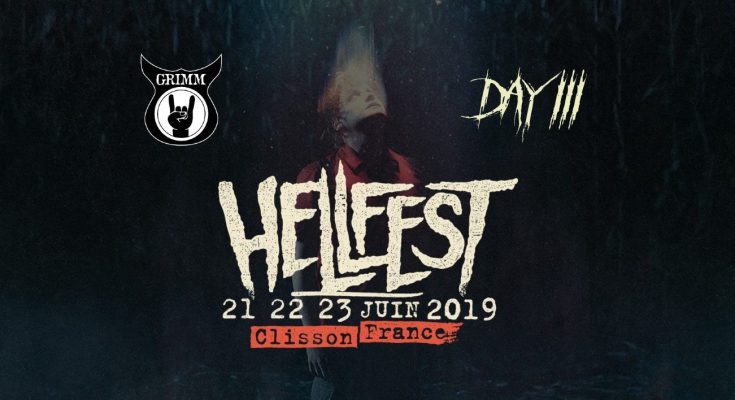 Slam Death Metal is on the rise these past couple of years, at the forefront of this all we come across Devourment as one of the leading acts current date, with a rough history the band had to reform 3 times resulting in them getting known for the stories instead of the music.

We recommend you guys to take a good listen to their albums and try to check them out live, it is a rare sight to see them live and you will get your head blown off by guttural vocals, fats paced riffs and thunderous blast beats.

With 2 albums and less than 15 gigs on their resume we encounter a band that has started off fast and already got the chance off showing their great occult vibe on Hellfest. We also have experienced musicians like George from Rotting Christ and Stathis form Nightfall in the band so it is not surprising they started off big.

We did also get the chance to speak with afterwards see keep out an eye for that! We are sure they will gather a great many followers in the coming years, they have convinced us so we need you to give them a listen.

Time for some Belgian talent on a French stage! It’s always nice to see people from your homeland being appreciated abroad, and the same can be said for Wiegedood. Their unfiltered and raw Black Metal riffs were able to shake the very foundations of Clisson!

While they like to chant about how lucky the dead might be, the living sure were lucky enough to enjoy such a treat. At their first song called Ontzieling (translation: to remove a soul), many people indeed felt like something got sucked out of them into a vast array of blastbeats, screams and some very solid an screeching riffs.

To our surprise, most people witnessing the event didn’t actually knew the band prior, but it’s safe to say that Wiegedood made more than a few new fans at Hellfest this year.

There is not a lot of folk to be experienced at Hellfest, but their relatively local band of Viking-like bards did appear in the temple to perform their ritualistic songs. It must come to no surprise that the marquis was filled to the brim with people, with a great mass even standing outside to catch a glimpse. Will Hellfest learn that there is indeed a great many that want to see more folk-like shows and adjust their future events accordingly? Only time will tell, but Skáld was without a doubt a success in the hearts of the people.

However, in this reporter’s opinion, it left quite a lot to be desired. Now in their defense: to create music that feels authentic and epic at the same time is not an easy feat, and they did have their moments. But there wasn’t anything new to it, nothing innovative that pulls Skáld away from the rest of the similar musicians. Does that mean it’s bad music? No! Not at all! It’s just a little more of the same, it’s good same, but still same.

Some big names here on stage! This trio of icons originating from bands including Morbid Angel and Mayhem, made their ultimate ensemble properly named Vltimas (we reckon pronounced Ultimas since the “vlt” seems to cause technical difficulties involving lips and tongues).

It’s had to pinpoint exactly what kind of genre they bring, but it’s safe to say they bring extreme music with an extremely energetic performance. The band gained a lot of momentum recently, despite being formed back in 2015. With their recent release in march this year named Something Wicked Marches In, the band came out of the shadows to deliver their highly anticipated album. The album was played in nearly it’s entirety which a great many people seemed to already know by heart. Keep your eyes on these guys, something tells us there is a lot more where that came from!

Ihsahn has come a long way with this ragtag team of misfits, even having his own project which sadly has not graced French pastures since Fall Of Summer four years ago. People seemed to flock back to the sacrament however, filling the Temple stage with people standing yards on end outside just to be a part of it.

Of course, all the tracks you would expect were played and then suddenly, the concert was over. People did not let up and Emperor brought three encore song, including my childhood song mentioned before. Ending with an incredibly strong play of Inno a Satana, people started to have their fill and were able to listen to The Wanderer played on tape as the band took off, leaving a very satisfied audience behind them. Let’s hope we don’t have to wait another four years to see them again.

It was explosive, energetic and right down to earth! It was Lamb Of God, responsible for many cheers and beers during their one hour long show on Hellfest! All the way from their opening song Omerta until they finished their set with Redneck, these guys did not stop for a second.

Randy Blythe is nearing the age of 50 but one stage, he still seems like a young teenager connecting with his audience treating it like your new best friend at a bar. In between songs he would speech about ongoing events in the world, urging people to pull their weight to better the future and think for themselves. The critical view of Lamb Of God concerning society, consumerism and morality have never been secret, it’s the cornerstone of their music and theme.

The songs themselves were played to perfection while sounding like it was a studio recording, kudo’s to their technical team! But why should I say anything more? Check it yourself!

Do we even need to give an intro about Testament? This Bay Area Thrash Metal band never seems to disappoint. Sadly, people were a bit less energetic than they would have probably been if not for the intense heat that day. The band itself also seemed to suffer from it a bit, but that didn’t stop them from giving a killer performance nonetheless.

With a powerhouse like Chuck Billy on stage, the vocal parts were as powerful as could be expected. Since they played quite early in the day, the setlist sadly was a bit short, so it were mostly the most popular songs that got played. Not bad of course, but some songs that get played less would have been great, as some of those are perhaps a bit underrated.

By ending the set with The Formation of Damnation, they sure as hell ended at full force!

Anthrax apparently didn’t have any plan to start fooling around or give us any time to rest. By opening up with the “Cowboys From Hell” intro, followed by fan favorite “Caught In A Mosh“, they got the crowd psyched from the start.

Even though in the past we also liked the music and shows with other vocalists; every time we see Belladona on stage again, it’s clear that he’s the real deal for Anthrax. Running around on stage with such enthousiasm just makes you love him.

Sadly, just like with Testament, they also played quite early in the evening, so had a rather short set. To end their set, they chose to play “Indians“. A perfect choice indeed!

As probably most people (that don’t live under a rock) know, Slayer is calling it quits. This show was part of their farewell tour, so we expected it to be big! Needless to say, they got the chance to play a lot of songs. 19 songs to please their fans and give a proper goodbye show. Songs like Postmortem, Hell Awaits, Raining Blood and Angel of Death shouldn’t come as a surprise to anyone then.

The band performed well, however…it didn’t feel any different from their previous shows. Perhaps other people experienced that differently, or perhaps you just had to stand all the way at the front, but it didn’t really feel “special”. But, as said before, their performance was top notch again, so no complaints there!

At the end of their show, the Hellfest fireworks started going off next to the stage, which was a nice end of the show, but perhaps it came a bit early, as a lot of people already turned around to face the fireworks while Tom Araya was still giving his goodbye speech…