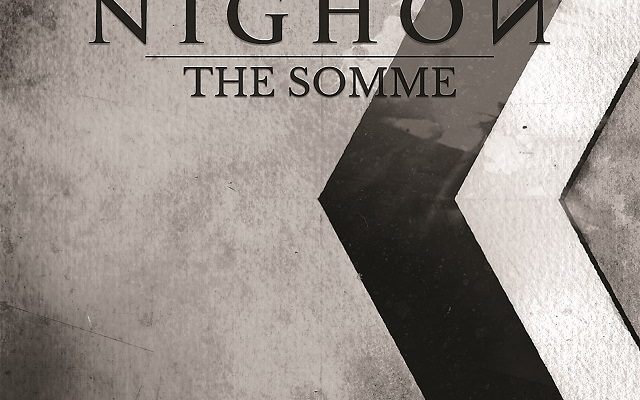 Just by hearing the words extreme metal, symphonic influences and Finland, I get high expectations of bands. Nighon is such an outfit and I’m happy to say that after a couple of listens, my expectations were met! The band was formed in 2008 and has just released its second album The Somme. The album title will ring a bell with those who are into history. The Battle of the Somme was one of the major battles during the First World War. The Somme is a concept album based around stories from the First and Second World War. Musically, Nighon can be described as a mix between Rammstein, Dimmu Borgir and Amaranthe. Pretty unique, I’d say.

First, The Somme opens with Marseille 1914. A spoken male voice takes us far back in time by describing the murder on Franz Ferdinand and his wife, which is regarded as the start of the First World War. The intro bursts out into what is according to me the strongest track on The Somme. The Greatest of Catastrophes is one of those songs that overwhelms you like a true wall of sound. Nighon proves with this song that they know how to create a balance between threatening, straight into your face metalcore riffs and catchy choruses. Singer Alva Sandström lifts the energy of the song to a higher level with hear crystal clear yet energetic voice. I can assure you that the chorus will get stuck in your head!

Next up is another memorable track: The Dirge. It’s definitely one of the heaviest tracks on the album. Nico Häggblom‘s ferocious growls combined with merciless bass lines add to the power of this song. A similar track is Lest We Forget. The tempo is slightly slower, which makes me doubt if this is a ballad or not.

A second ballsy song is Blow Them To Hell. If I didn’t know any better, I’d swear this was a Dimmu Borgir song. It has a truly dark atmosphere supported by pounding blastbeats that will grant your ears just a couple of seconds of rest in the verse. Reclaiming Ravenpoint contains largely the same elements, but is is again Alva‘s vocals that give a fresh touch to the general feel. Next up is the intermezzo You Do Not Know What The Night Will Bring that explodes into Minor Secundus. What a huge sound! The verse has even some black metal influences and makes this one of Nighon‘s most dramatic tracks.

The heaviness continues on I Fear For Tomorrow where you’ll also get to hear Finntroll‘s Mathias ‘Vreth’ Lillmåns on vocals. Nighon closes The Somme with the title track Somme. Alva shows the softer side of her voice with an emotional intro. She’s actually the dominating element in this song and I’d like to hear more of this in the future. Her vocals add to the hopeful, positive atmosphere you hear in most of the songs.

And with that I have to conclude that this is one of the only points of criticism I have. More Alva, and less repetitive choruses. Sure, Nighon has some killer choruses on this record, but it just gets annoying when they’re repeated too much. Furthermore, this is a band that managed to create a truly unique sound, which is not easy these days. The Somme will appeal to a wide range of metalheads with their blend of industrial metal, metalcore and symphonic metal. Make sure to keep an eye out for these guys, it won’t be the last we hear of them!