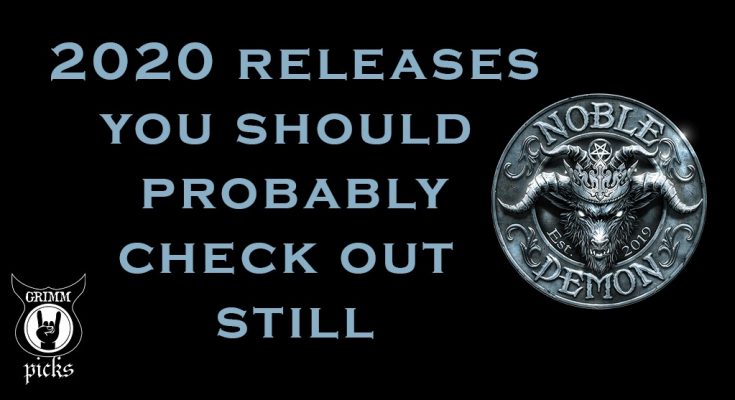 2020 will be known as the year during which the music industry seemingly got to a standstill due to the lockdowns following the pandemic. But it should also be known as the year that a new and very promising label was started. Noble Demon Records came from the ambition of Patrick Walch to create a unique label that offered a safe haven to bands who want to bring a certain quality of music in this world. Looking at his first year of operation, he showed with the label a certain artistic integrity and a promise of a highly diverse roster (with a strong presence of Finnish bands, for now at least).

We covered the releases of the return of Dawn of Solace (review here), the thrashers of Gomorra (review here), Swedish black/death metal outfit Night Crowned (review here) and our senior publisher named the new album of the Finnish proggers Humavoid as one of his favorite albums of the year (find the list here). But since they released a new album almost every single month, it means that we haven’t put the proper attention to 8 more releases:

Colombian death metal outfit No Raza has been around for almost a quarter of a century by now. In the mean time they’re relocated to Florida, which only seems right looking at the rich death metal history and scene in that state. With ‘Transcending Material Sins’ they released full-length album number 4, almost 6 years after their former release ‘When Chaos Reigns’ and death metal chaos definitely reigns with an iron fist still on this one! Straight from the first track you get smacked in the face by thick, groovy and foul death metal and they never give you any time to relax until the album outro. Immediate headbang material going from face-melting to mid-pace death metal destruction with a voice from the depths of hell, blistering guitar solo’s, a barrage of machine gun drumming and at times a touch of classic death/doom. Definitely to be recommended for fans of bands like Grave, Asphyx and Obituary.

The Vice is a Swedish band that has been turning quite some heads already since 2012 with their music. And they very much did the same when we heard the first single from their 2nd full-length and Noble Demon debut ‘White Teeth Rebellion’. They took the darkness from black metal, added some black ‘n’ roll/rock flair, a melancholic doomy touch and a sprinkle of personality to turn their craft into a somewhat catchy but definitely captivating creepy and mean piece of music. There are a couple of real fun black ‘n’ roll tracks to be found on this release that are very reminiscent of the later Satyricon sound, though one minor pitfalls of this release might be that a lot of the elements are constantly re-used making some songs sound very similar to each other. With it’s mid-pace tempo and the creepily half whispering/half growling vocals, it might get a tad bit boring for some listeners, but don’t let you keep that from picking this one up! The Vice is definitely on their way to become a damn interesting element of the scene.

The debut EP by the brand new Finnish project Mercury Circle is a special one. Started by Jaani Peuhu (Iconcrash, Swallow The Sun, Hallatar), it boasts to be “dark metal infused with powerful synth/electro waves and doom”. And that description is actually pretty accurate. Branded as “New Doom”, the music of this project creates a dark, doomy and gloomy atmosphere that is enhanced by deftly interwoven electronic (synth) sounds. Jaani‘s vocals are absolutely enchanting and gorgeous and perfectly blend into the slowly building up music. Having gathered around him a nice selection of musicians from renown Finnish bands, including providing a new outlet for former Children of Bodom drummer Jaska. Discovering the mesmerizing trip offered by the 5 compositions on this EP was one of the highlights in music for me personally and seeing all the different musicians (including a harpist, shamanic drums,…) and sounds that are contributing to the upcoming full-length makes me almost shiver with eagerness to hear what is to come still from this project. It’s a slow burner, but if you’re a fan of the more atmospheric and calm parts of for instance Swallow the Sun, you definitely need to turn your attention to this band if you haven’t yet.

With the Mexican band Tulkas, Noble Demon added some pure and relentless thrash metal to their roster. These guys have been around for a decade now and their EP ‘The Beginning Of The End’ is a perfect teaser of what to expect of the soon to be coming full-length. It’s pretty simple actually: speedy, energetic and destructive modern thrash metal of the purest form! Fans of Exodus, Gama Bomb and early Lost Society will find quite some pleasure in this one and moshpits and shoutalongs won’t be far away when these guys start playing at a gig! Besides the furious riffing and blistering solos, I also absolutely love the bass regularly rearing its groovy head from the midst of the chaos! And that Metallica cover… they definitely made something nasty with their rendition of ‘Shortest Straw’. Now lets just start the moshpit already, please!

Among the many Finnish bands that joined the Noble Demon roster in 2020, the death/doom metal outfit Red Moon Architect was one of them. Barely a year after their very underground and dark ‘Kuura‘ release, they’re back with ‘Emptiness Weighs The Most’, the second full-length with the most recent iteration of the band. While this one is less inclined towards black metal compared to its predecessor, what we get is high quality atmospheric death/doom with heaps of melody, demonic harsh vocals and beautiful female clean vocals in contradiction. This is an absolutely crushing record steeped in gorgeous melancholy and deep despair, and with musicians from prominent Finnish bands like Aeonian Sorrow, Crimson Sun and quite a few others, the high quality and standards are a given. Just close your eyes and let yourself drift away on Finnish melancholy.

The Greek outfit Jaded Star brings in yet another interestingly different entry into the Noble Demon roster. Their modern metal sound with electronic touches and steeped in classic and old school heavy metal dynamics is energetic and uplifting. ‘Realign‘ is their second full-length and continues the path they took from the start with emotional tracks about being strong in fighting your fears, freedom to be yourself and struggles with those around you, floating in dynamic, catchy and captivating compositions. We can easily imagine these guys rising to the top of their particular kind of sound, joining the ranks of bands like Amaranthe, Beyond The Black and the lot.

After having the new Dawn of Solace and Red Moon Architect, there came yet another dose of Finnish melancholic metal with the new release by Kaunis Kuolematon. With a crushing melodic death/doom sound somewhat in the veins of Red Moon Architect and Swallow The Sun and lyrics completely in Finnish, Kaunis Kuolematon will appeal to many fans of Finnish metal. Besides the rather diverse deep graveled and screamed harsh vocals by Olli, we see the return of Mikko Heikala‘s beautifully melancholic clean vocals that we got a solid taste of already earlier on the Dawn of Solace release. The combination of banging riffs, soaring melodies and dark aesthetics on ‘Syttyköön Toinen Aurinko’ is absolutely captivating and gorgeous. Kaunis Kuolematon is a band you have to check out and will continue to soar to great heights.

The last Noble Demon release is actually a re-release/-recording but a great way to wrap up a damn fruitful year. The Swedish S.O.R.M re-recorded the bass and they added some organ to all of the songs before finally giving a proper release to their debut EP ‘Hellraiser’ via the label. With these guys, Noble Demon added some quality hard rock to the roster, even further diversifying their offer. All 4 of the tracks are damn catchy and groovy and will most likely appeal to many fans of heavy music. At times they remind me of bands like (old) Black Stone Cherry, Bombus or even Grand Magus and Night Flight Orchestra with their hooks, fuzzy guitars and powerful rock sound. And their rendition of ‘House of the Rising Sun’ is actually a quite tasteful and fun version! I truly hope this is just a little teaser of an upcoming full-length to come as soon as possible, because this tastes like more.