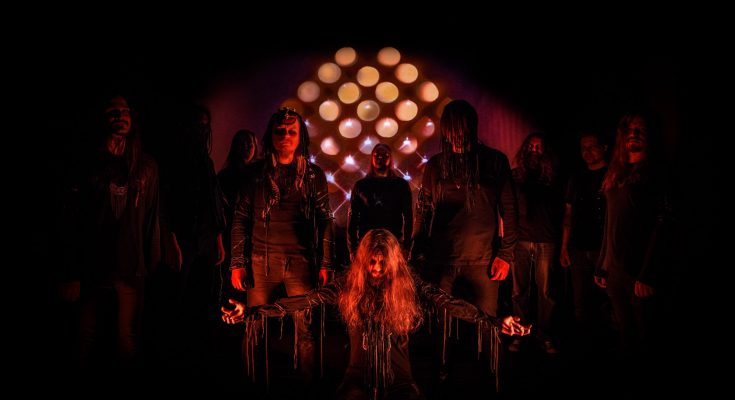 The awe-inspiring Finnish metallic psychedelicists Oranssi Pazuzu and their Tampere cohorts Dark Buddha Rising, known for their grandiose slug-paced ritualist doom metal, have recorded a new album, which will be released on Svart Records on April 5th, 2019. The amalgam of these two entities is melted as one on Syntheosis, to be released under the moniker Waste of Space Orchestra.

Syntheosis began as a commissioned piece for Roadburn Festival. The fest, which began as a small-scale gathering of stoner rock addicts, has evolved over the years into a four-day celebration of heavy music in all of its possible forms and interpretations, from riff-worship to punishing soundscapes and beyond. The list of Roadburn performers over the years is a veritable who’s who of underground heavy culture, with everyone from  Neurosis and Sleep to Godflesh having performed at the event.

“Syntheosis” the commissioned piece was prepared at the request of the festival and performed there in April 2018 in front of over 3000 people. Syntheosis the album is not a live recording but a carefully prepared studio interpretation, on which the ten musicians worked over the spring and summer of 2018. The album was recorded and mixed by Julius Mauranen, who also worked on Oranssi Pazuzu’s Värähtelijä.  The album can be digested as a challenging, engaging psych metal record or as a dimension-spanning one-hour performance consisting of nine parts. The work recounts a story of three beings and their deep search for knowledge:

The Shaman (Vesa Ajomo) is seeing oppressing visions from the bleak future of mankind.
The Seeker (Juho Vanhanen) is searching for the truth from unknown dimensions with secret methods.
The Possessor (Marko Neuman) corrupts the other individuals, manipulating them into his own sinister plan

A ceremony ends up in the opening of a portal, which sucks the three beings into an alien dimension, which is populated by brain-mutilating color storms and ego-diminishing audio violence. Eventually, the three are forced to reach equilibrium and melt their minds into one collective consciousness.

Svart Records will release Waste of Space Orchestra‘s Syntheosis worldwide on CD, double-LP vinyl, and digital formats on April 5th, 2019. Cover art, tracklisting, preorder info, and further release details shall be revealed in the new year. In the meantime, see & hear a special trailer for the album HERE at Svart‘s official YouTube channel.