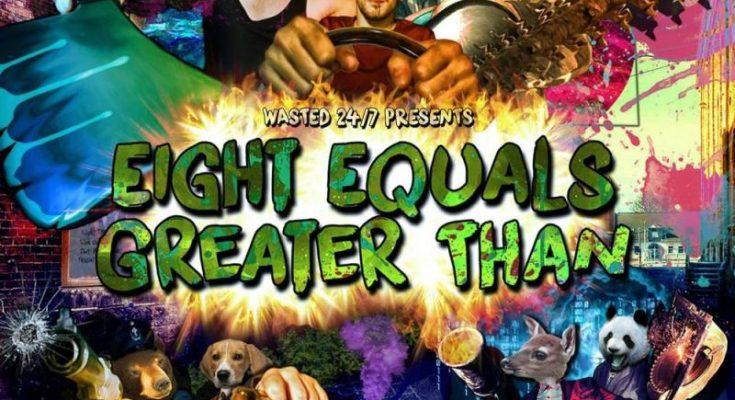 It seems like 2016 is going to be an interesting year for Belgian punk rock fans since this is the second release in this style I get my hands on in almost as many months. Wasted 24/7 just released their third full album, called Eight Equals Greater Than. Looking at the name of the band, their crazy all-over album cover, the wacky design they use on their merchandise (take a look on their Facebook page) and the nice hidden message in the album title (or what do you think “8=>” looks like? Yep, go dirty mind), they look like one hell of a fun gang of punkers.

Despite them seemingly being all about fun and games, they went through some hard times recently. They went from 4 to 3 members when their lead guitarist left and singer-guitarist Pepijn struggled with some emotional issues. All this made the band stronger though. They clearly got some stuff worked out through writing the songs and their lyrics. A lot of them handle feelings of loneliness, fighting to stay on top and personal growth.

Talking about growth, the music they created definitely has more body to it compared to earlier releases. There’s a more grown-up feel to it all. They’re not just a punk rock band anymore. The distinctive sound of the genre is still there, but there’s actually more than just that to the music. They regularly switch from softer, melodic pieces to the more up-tempo energetic punky vibe. A lot of songs are constructed of several layers with often the addition of a nice guitar solo. Hints of bands like The Offspring, Blink-182 and Green Day are very much present, but definitely with their own spin to it. They’ve really put their own signature on the music. Besides that, the whole record has a high-value production feel to it. All the time and work they put into getting their music just right at Shellshock Studio in Knokke-Heist and De Studio in Asse clearly delivered.

To be honest, after my first listening, I wasn’t very impressed. There were no songs that really caught my attention. It seemed all simple pop punk/punk rock songs throughout the album. Except for my immediate favorite song Liquid Cocaine, which is a very short outburst of pure punk spirit. It’s loud, it’s nasty and it’s fast! This little gem will probably light the room on fire when they bring it live. But after a few spins, there were a few more songs that started to gain my appreciation.

Sinkhole starts with a really powerful riff that sucks you into the song and most likely will make you nod along if you’re into punk rock. During the first verse it calms down a bit with sensitive singing that now and then actually goes into a higher register that gives you the impression that the singer is really emotional invested in what he’s bringing. At the same time the guitar still adds a nice edge to it. Building up to the chorus, you notice the voice getting more powerful and when the chorus kicks in, they amp up the energy again. Near the end of the song they add a nice little solo that proves yet again that it’s more than “just” a punk rock band and that’ll probably bring a bit of a smile on your face.

Lost and Found goes a bit in the same direction as Sinkhole, but here they clearly got rid of some more frustrations. The thing I really like in this song is the prominent place that the bass takes. In the verses you constantly hear the bass backing up the vocals and the guitar peeks its head out just now and then. Near the end, instead of a guitar solo, they let the drums have its moment for a bit to then let the bass join in and finish up the song with some blazing hot guitars. A really nicely built up song this is!

Jetlags, which is also the first single, reminds me a lot of I Miss You by Blink-182 in the intro. Overall this seems like one of their more emotional songs, clearly singing about all the stuff they went through recently. The song seems very personal and this gets translated beautifully, especially with the short bridge where they add a little bit of piano. Great song and a very good pick as their first single!

Last but not least I have to mention the one song that really sticks out and yet again shows that they’re capable of more than just plain punk rock. N,N-Dimethyltryptamine is an instrumental track that feels a bit like a short jam session. It’s really a nice little fresh wind in between all the other songs. People might know the song title better under the name “DMT”, a psychedelic used by indigenous Amazonian Amarydian cultures, also known as ayahuasca which is said to be the strongest psychedelic compound in the world known to man. It actually feels a bit like a trippy moment on the album, a kind of unexpected piece of music. The tribes even get a bit of a voice in it with a little chant that makes you envision them dancing around a fire being on a higher plane.

To summarize, this is a pretty good punk rock release that will appeal to teenagers that struggle with certain emotions. But on the other hand the people that used to listen to this kind of music and want a little more body to it, will very much appreciate this creation too. I’m giving this an overall score of 7,5/10. Great job!