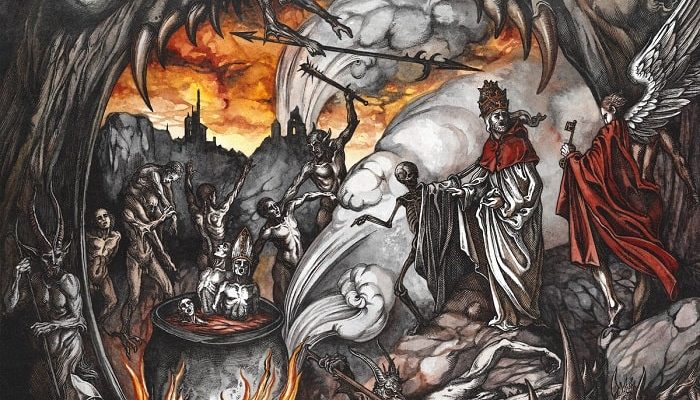 Nidrosian black metal act Whoredom Rife‘s third album “Winds of Wrath” presents the peak performance which makes them parallel to the Norwegian black metal bands of the early nineties. In this sense, the newest magnum opus is overshadowed by the grim majestic grandeur and firm lineup of multi-instrumentalist V.Einride and K.R (vocals), resulting in a profound raw sound and aggressive scale suiting their work perfectly. Despite the three year gap, Whoredom Rife has spanned an epic saga of majestic black metal splendor. “Winds of Wrath” takes a consistent approach as the follow-up to their sophomore album “Nid – Hymner Av Hat”, as you will come to grasp the sonic evolution taking its course through the songs, maintaining a great balance between rawness and atmosphere.

Opening track “Curse of the Moon” conjures images of the haunted forest reigned by the demonic force of darkness. The cold frosty set of the riffs and grim black metal growls is encapsulated by relentless drumming, with the fierce blizzard of the blistering riffs and the scathing rhythm wielding enormous force. And while the epic track unfolds, the guitars provide memorable tremolo hooks. There are plenty of blast beats and effective use of the blazing guitars, tremolo-picked riffs, and the keyboards adding grim shades to the sonic palette to create an evil and raw atmosphere. The essence of the album captures the raw and majestic style of Norwegian black metal. Whoredom Rife draws its atmospheric inspiration from the likes of Keep of Kalessin’s classic album “Through Times of War” and Emperor’s masterwork “In The Nightside Eclipse”.

“A Thousand Graves Endured” begins with a fast pace, the eerie atmospheric synth effectively brimming the vast landscapes and the icy coldness of K.R’s vocals sends chills down your spine. The shimmering synth is channeled by the ice storm of piercing riffs, and thunderous blast beats. The eerie synth passages imbue the song with dark textures and chilling rhythm guitars, propelling the atmosphere beyond the darkness. Aesthetically “Winds of Wrath” is quite densely swathed in the Nordic trademark with the frosty tempo build-ups brought to an epic touch. The opulent nuances of atmospheric black metal shine throughout the album.

The composition infuses the elements of the band’s earlier album “Gospel of Hate”, which is enhanced by the creative use of the synth, delivering a harsh black metal anthem. While capturing the whole essence of rawness and aggression, the tremolo-picked riffs bring perfectly unbridled catchy hooks. The focused tremolos on this track weave slower epic tempos, making it one of their most majestic works, where the guitars offer grandiose black metal riffing. “Winds of Wrath” exhibits the band’s songwriting prowess of crafting an epic style of black metal. The production is just perfect and matches the cult classic albums from bands like Enslaved, Satyricon, and Mayhem.

The production is just perfect and matches the cult classic albums from bands like Enslaved, Satyricon, and Keep of Kalessin. “Hav av Sykdoms Blod” begins at a fast-paced tempo but it mysteriously inclines towards a dark and brooding mood and the kind of atmosphere presented here gives it an archaic Nordic tone. The overall quality is very cold and grim, the lead guitars blend the bleak backdrop of the keyboards and the emotive tremolos are followed by thundering drums. Whoredom Rife on their third album brings plenty of blazing moments. The dark appeal of the guitar riffs has a chilling aspect of grimness. “Winds of Wrath” begins with excellent guitar work capturing the whole essence in a twisted grim six minutes of icy tremolos, furious blast beats and crashing cymbals. As the opening riff lashes fast tremolo-picked riffs, the effective rhythm creates a dark chilling atmosphere balancing the epic moments and ferocity in a stormy aura.

The menacing rasps are backed by crashing blast beats whereas the guitar chords create a dark and sorrowful feel, the track oscillates between mid-paced tempos to faster sections. The freezing guitars then shift from storming paces to slower sections where they settle into a slow brooding mood. Offering a majestic feel throughout this epic track, the frosty effect of the synth echoes with the contrasting elements of the guitars. One of the alluring highlights here is the vocals that sound evil, emphasizing the dark nature of the second wave of black metal.

The final track “Einride” is a bleak and slower song overall that flows into a chilling atmosphere, its haunting ambiance infuses an uplifting experience of the melodic and the atmospheric scope perfectly. The melodic tremolo picking gives such a towering resonance, forming a bleak wall of melodies that sounds utterly cold and evil. “Winds of Wrath” is one of the best releases in black metal this year. Whoredom Rife are true leaders of the Nidrosian style of elite bands of Norway, this is highly recommended to all of those who like their music dark and grim.