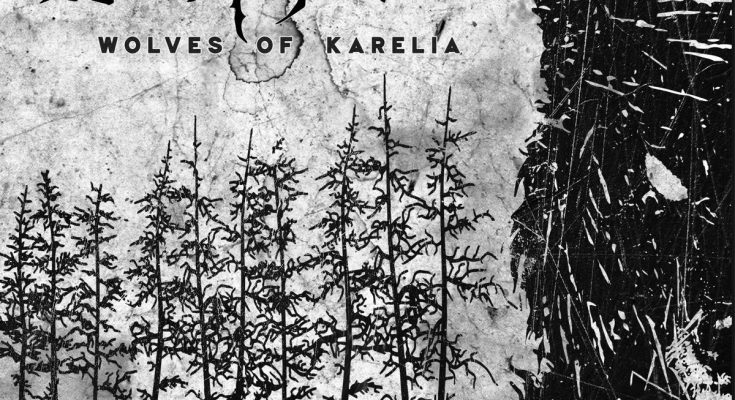 One of the most persistently quality metal outfits from Finland is most definitely Wolfheart. Tuomas Saukkonen‘s main project releases bangers of albums time after time. It’s now been about 2 years since the release of the stellar ‘Constellation of the Black Light’, so it’s time for another one. For the 5th album they take it into concept album realms with ‘Wolves of Karelia’, telling tales about the destruction, death and misery that the Winter War brought to Finland about 80 years ago and the stubborn resistance of its people. It seems almost to fitting that the wolves of Wolfheart bring these stories to life through Tuomas‘ self-coined musical style “Winter metal”.

At first glance, the tracks promise a more concise and to-the-point songwriting where the long epics found on some of Wolfheart‘s other releases don’t have a place. Which immediately gets proven by opening track ‘Hail of Steel’. That while it starts off with the typical Wolfheart melodic riffing, gives you a proper kick in the teeth with Tuomas‘ rumbling growls, blackened melodeath guitars and regular blastbeats. Mind you, there is still plenty of harmonies and melody to be found with aptly added keyboards that makes it more than just a blasting of Winter metal.

‘Horizon on Fire’ continues much in the same vein of epic harsh metal, perfect pieces to evoke the feeling of approaching battle. Where in ‘Hail of Steel’ the Finns saw the enemy’s destruction unfolding, now they are really getting ready to push back and defend their country, like Tuomas expresses with the line “here is where we draw the line”. In ‘Reaper’ the battle has burst into full madness, both lyrically and musically, where we get a more straightforward ass-kicker of a melodeath track depicting the seemingly impossible fight against a greater force. That part of the story continues into ‘The Hammer’, bringing in one of the sickest song intros I’ve heard in a while from Wolfheart before rolling back into a true pummeling. A truly unrelenting track that goes along with the dark lyrics of being the last one among your dead brothers, never surrendering.

The in ‘The Hammer’ mentioned ‘Eye of the Storm’ follows, taking the name to heart with an instrumental piece with just acoustic guitar, violin and piano, giving the listener some reprieve from the onslaught. What follows is the true desperation that the all destructive forest fires and fierce battles brought into the country, through the very black metal tinged ‘Born From Fire’. But it also talks of the true Finnish grit or “sisu” that showed when rising up from the misery as relentless warriors biting back as a cornered wolf would. In the end, everything settled down and the Finnish soldiers oversaw the ramifications of the war, digging up their slaughtered brothers from the burnt forests and carry them home. The clearly more doomy ‘Ashes’ is in that regard the perfect closer for this epic tale of desperate battles, massive destruction and death, loaded with atmospheric parts and massive grooves in the riffing.

Saukkonen and his brothers in Wolfheart delivered yet again a signature quality release with ‘Wolves of Karelia’. While there may not be a lot of memorable tracks on it on the level of catchiness, one for one the tracks have a clear place in the overall Winter War concept and really brings the epic and dark story to life. This is an album best consumed from start to finish in one sitting. Curious to see how individual tracks will work in a live setting among other Wolfheart classics.

2 thoughts on “Wolfheart – Wolves of Karelia”