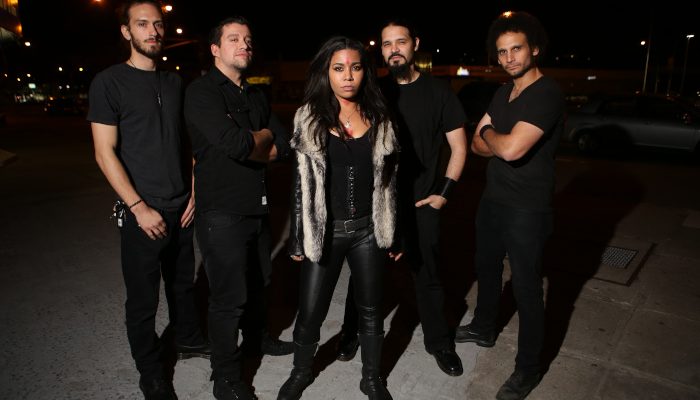 New York’s blackened, death metal juggernaut ALEKHINE’S GUN returns to the forefront of the underground metal scene with the release of an annihilating new single titled, “21,” streaming now on YouTube. The song is the band’s first new material in six years, since the release of their 2014 heralded breakout EP, …And Kings Will Fall, and will be featured on a forthcoming EP, Year of the Lazerus, that’s due out at a future date. Details of the release are forthcoming.

“Inspired by the traditional Tibetan Buddhist prayer ‘Praises to the Twenty-One Taras,’ ‘21’ is a musical offering and an act of paying homage to the primordial power within by delving deeply into calling upon the forces of fierce compassion and the wrathful aspect of love and wisdom needed in times of fear and uncertainty in order to seek refuge and gain enlightenment. Reaching beyond time and space, the bond between us and the true nature of reality is unbreakable, unstoppable and eternal.”

ALEKHINE’S GUN blends elements of thrash, black metal and death metal with subtle undertones and nods to New York hardcore of the 90’s and all things extreme. In this unique combination they have unlocked a captivating sound and style and created a feel that is notable and recognizably their own.

In 2012, ALEKHINE’S GUN released a four-track EP entitled Meditations In Wrath with Jeff Martinez (Desolate) on guitar, Dan Martinez (King Hell) on bass and Jessica Pimentel “The Crusher” (Everybody Gets Hurt/Desolate) on Vocals and guitar. This NYC veteran lineup delivered a greatly received, high-energy sonic assault with their debut release. Their music is laced with a barrage of head-banging riffs and groove, colored with dark harmony and accented by relentless, technical drumming. Adding to all of this are fierce, in your face vocals and lyrics steeped in the profound wisdom of ancient Buddhist texts, vibrant imagery, and raw emotional honesty. ALEKHINE’S GUN brings you a primal, transcendent, electric energy. This fury is not only felt in recordings but wherever they go as they have been marked as being stand out, vigorous, dynamic performers who hold their own in any live venue alongside world renowned bands. In 2014 with the sophomore release entitled …And Kings Will Fall still proved ALEKHINE’S GUN is a force to be reckoned with. They bring to you heart and passion; Insight and meditation; Wrath and spirit.

“We are Alekhine’s Gun from Brooklyn, New York. This is who we are. This is what we do.”