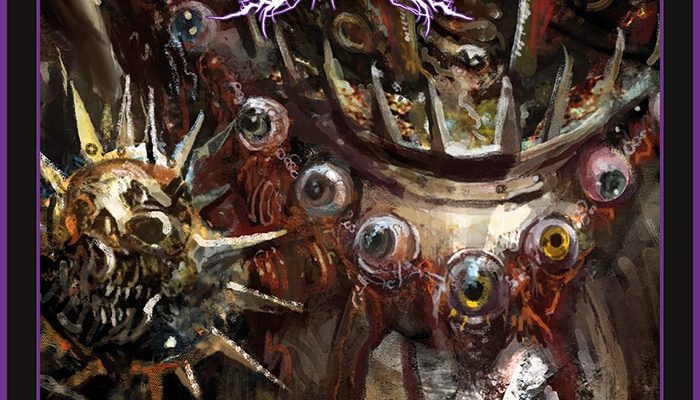 “The video for Meathook Massacre is from the recording process of the Necro Sapiens album. The whole album was recorded live, every one of us tracking simultaneously – and the observant listener is able to spot some tracks, that made it to the final cut as well! (Disclaimer: the lights weren’t as cool for the whole recording, sadly…)”

“In his den of violence, a specialist in pain and suffering resides. A torture mercenary, who lives to see the everflowing stream of malicious desires of the elite, satisfied. We welcome you, to his Meathook Massacre.”

BAEST come from Aarhus in Denmark and have successfully established themselves as one of the country’s most promising metal acts in recent years. While deeply rooted in straight-forward classic death metal inspired by genre legends like Dismember, Entombed, Morbid Angel, Death, and Bolt Thrower, the 2015 formed band evolved from a Danish underground phenomenon to an internationally touring act (2018 tour with Abbath, 2019 EU/UK trek with Decapitated). Also, at festivals like Summer Breeze, Copenhell, Ruhrpott Metal Meeting, Roskilde, they left audiences impressed and begging for more. After their already praised debut album “Danse Macabre” the band took it to the next level in 2019 and delivered “Venenum” where they refined their already steamroller-like signature sound.

With the expectation-bar already set so high for their next record BAEST truly drops their most anticipated and most important album so far.

The album is available in the following formats and can be pre – ordered HERE!