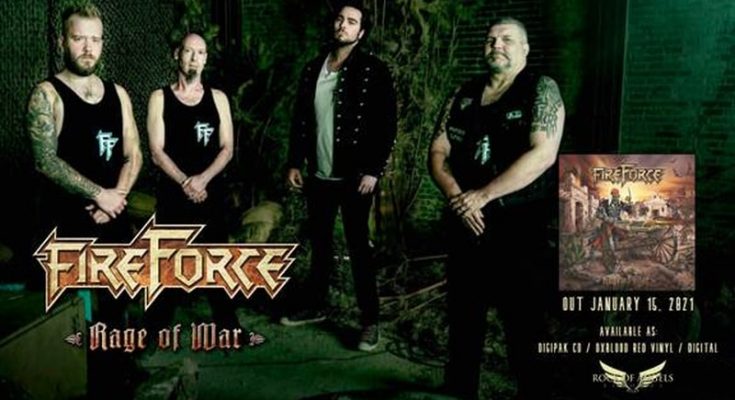 ‘Rage Of War’ is the fourth album by Belgian heavy metallers FIREFORCE. The album was produced by R.D. Liapakis and Bob Briessinck and with the renowned Henrik Udd behind the mixing and mastering desk, the band rediscovered their tight, driving heavy metal; like a panzer at full-throttle! Twelve (ten on the LP version) intensely powerful songs that will definitively put the power in their combat metal. At the same time, many pleasant harmonic and melodic components are sure to make an impression. The concept of the album remains unchanged: historical events through the ages that determined our world today. Battles and bravery, madness and war… “Rage Of War” is a heavy metal call to arms, a powerful combat story-telling amalgamation of pounding drums, tight guitar riffing, heavy duty bass lines, lead themes and soloing melodies all around and of course, furious vocals give voice to the war lyrics and describe the blood, the loss and the courage in a battlefield! This record sounds solid, heavy and it will definitely be the Heavy Metal must-have record for all the true metalheads around the world! The combat never ends! March or DIE! Album artwork by Eric Philippe. Band photography by Rudy De Doncker, Jens De Vos.

“Rage Of War” will be released through ROAR! Rock of Angels Records, physically and digitally worldwide on January 15, 2021.