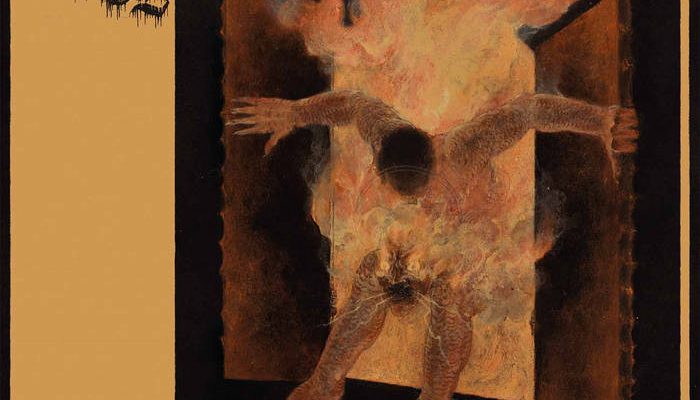 The U.S. supergroup war metal outfit, Black Curse, delivers a savage and barbaric form of primitive death metal. The Denver Colorado group is comprised of well-known members from bands such as Blood Incantation, Spectral Voice, Khemmis and Primitive Man. This hybrid entity was formed in 2015 and was earlier known as Maliblis before the band changed its name to Black Curse. Among the robust lineup, we have Gravetorn (vocals, guitars), Jonathan Campos (guitars), Morris Kolontyrsky (bass guitar), and Antinom (drums). ‘The Endless Wound‘ exerts different influences from other genres such as doom and black metal. The members mix these sonic components in a devastating way. It’s spectacular to behold how these musicians add their unique qualities to the music.

The guitars on the opening track ‘Charnel Rift’ combine the malevolence of raw death metal with crushing blast beats, unleashing a ferocious assault. All the four members strike mercilessly with all the extreme velocity of the drums and infernal riffs. Unleashing an abrasive barrage, the guitars give you an impression of utmost brutality. Even with all the savagery in their take on death metal, Black Curse maintains its focus right from the beginning of the album. ‘The Endless Wound‘ feels like a whole album released from its restraints as the band shows a firm ability to bend the style of death metal.

By blending the extreme and chaotic patterns of war metal the band suddenly morphs on the slow doom metal tempos. ‘Crowned in (Floral) Vice’ begins with the immense blast of the drums and delivers a bestial onslaught of primitive war metal. Black Curse‘s debut album is very similar to what Pissgrave presented on their sophomore, while the vocals mostly utter the demonic roars adding more violence to the music. The primitive nature of this debut is defined by a powerful surge of anger and brutality even when the tempo slows down. Black Curse keep things in motion. One of the major aspects is that songs are brought by a punishing assault.

In addition, there are other influences from bands like Teitanblood, Diocletian and Proclamation All are but examples of strong inspiration. The third track ‘Enraptured by Decay’ sums up these influences as the band takes a slower approach and continues to deliver a diversified form of brutality. Another element that becomes prominent is the purity of war metal aesthetics that outlines the debut. Even with so much intensity and uncompromising brutality ,Black Curse manages to give each element a deserving focus. War metal, raw metal, or primordial death metal: all these musical traits can be applied to what Black Curse has presented. ‘Seared Eyes‘ is provided by the chaotic raw riffs while the drums sound like a rumble of booming thunder.

‘The Endless Wound‘ is dominated by these unhinged tempos. Needless to say the tracks burst into fury. In the most fundamental form, Black Curse expresses their bestial notions of modern war metal. With the right balance of vocal atmospherics and sonic intensity, ‘Lifeless Sanctum‘ gives us something entirely different from the previous tracks. This instrumental piece of pounding drums and incendiary guitars shows what the band is really capable of. Then comes the album title track to wreak havoc with its disruptive and frenzied riffs. As soon as the drums create the tectonic blasts beats, the vocals switch to deafening black metal shrieks and death metal roars.

The guitars launch the tremolo-picked riffs and all hell breaks loose when the enormous doom metal riffs and the double bass create massive destruction. When it comes to the quality of the riffs, Gravetorn and Jonathan Campos charge the guitars with the necessary arrangements to bring acute wave impulses. ‘The Endless Wound‘ explodes with fury and maintains the relentless brutality of the songs. With the vocals’ beastly performance and the whirling tempos of the drums, deviously shifting from fast to slow churning doom metal, Black Curse expertly conveys a massive take on war metal. Because the tracks on the debut are accessible and less complex, the final track ‘Finality I Behold‘ is brought to bear by blazing, primordial riffs. Substantially, the convulsing blast beats are furious and eruptive. Brought about by various compositions, the primitive elements of black metal provide a dark and demonic atmosphere. ‘The Endless Wound‘ is highly recommended for fans of Pissgrave, Teitanblood, and Ascended Dead.