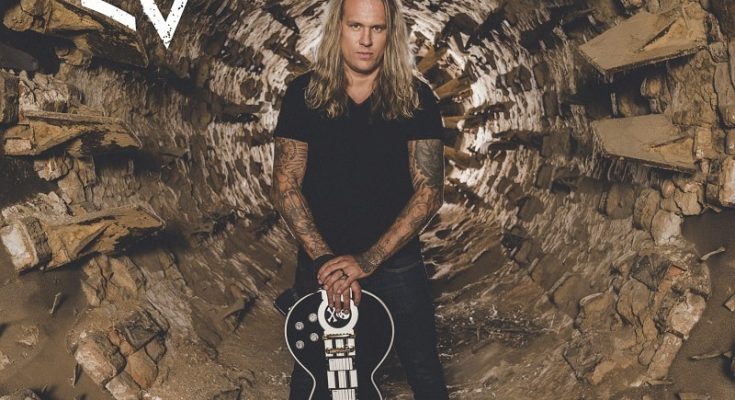 The metal and rock music scene has hidden talents everywhere. Quite often those extremely talented individuals end up being so-called “hired guns”, musicians who are paid to deliver the goods on someone else’s record. One of those people is the hidden gem that is the Finnish guitar mastermind Euge Valovirta. After being the songwriting partner of the ilustrous Niklas Kvarforth for his band Shining, he came to the spotlights even more when joining the Swedish super group Cyhra last year. And apparently this pushed him to release his first solo album called Easy Does It.

Of course a solo album made by a guitar talent like Euge evolves mostly around what they can get out of that snared instrument. Though the strength of this album is that it’s not all about worshipping himself and tiresome long shredding and soloing compared to a lot of other guitar virtuosi. Don’t get me wrong, there are still plenty of instrumental tracks that are all about that much admired instrument. But the songwriting and overall sound of those is so exciting that they’re some of the most fun moments on the album, much reminding me of the similarly mesmerizing releases by John 5. Do check out the amazing classical music turns reggae turns groovy as hell metal into Don’t Take It Too Hard, the fast-paced almost hillbilly picking on Helsinki Fried Chicken and Headless Chicken and the praise and wink to fellow guitar legend John 5 on the aptly named John 5!

But what makes this solo album even stronger, is the inclusion of some very talented vocalists on over half of the tracks. And what is even cooler, much like on Slash‘s solo album from 2010, Euge shows off his guitar and songwriting skills by creating tracks with his own distinct sound that are at the same time perfectly tailored for the specific guest vocalist. There’s the soaring and groovy Triggered Boulevard with Jules Näveri (Profane Omen, Enemy Of The Sun) and Southern rock infused banger Swamp Stomp with the always impressive grunge-tinged vocals from Tommy Tuovinen (MyGrain, Oceanhoarse). The autobiography track Feed The Fire with Nico Hartonen (Godsplague) at first sounds like a Van Halen clone, but bursts soon into a groovy motherfucker of a metal track.

Eddie Van Halen and other guitarists from the same age of rock are even more represented in the very eighties sounding track Liquid Lunch on which the Southern boogie twang is strong and one of Finland’s up-and-coming stars, Hannes Kett (Shiraz Lane) provides the necessary (often high pitched) vocal lines. One last love outing for Southern rock comes with Southern Man and Micko Hell (Gloomy Grim) on vocals comes up before ending with probably the most surprising track of them all… Du Är Cancer is a feverish metal track with Shining‘s Niklas Kvarforth growling and grunting like a beast from the depths of hell that simply puts the pedal to the metal and kills it so hard that you’re basically left wanting for more.

And that’s what I want after listening to Euge Valovirta‘s Easy Does It: MORE! Before you know it the well over 40 min album is finished and you urge for more of the same stuff. The perfect balance between showing off guitar virtuosity, smart songwriting and giving other artists some room to shine results into a release that just works on every level. Play it as the soundtrack to your roadtrip, at a party with friends or even during your workout and you’ll enjoy the hell out of it!