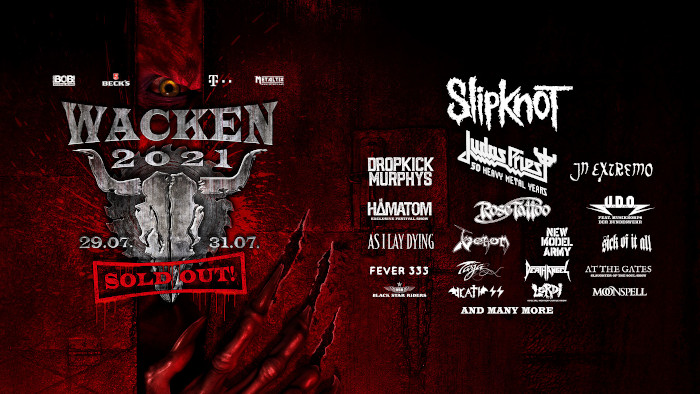 There are nine more reasons to look forward to Wacken Open Air 2021, which will take place from July 29 to 31 and is already sold out. Slipknot, In Extremo, Sick Of It All, U.D.O., New Model Army, Fever 333, Death Angel, At The Gates and Black Star Riders have been confirmed for the festival’s next edition in a live stream on its official Twitch channel Full Metal Gaming.

Most of these acts had already been announced for Wacken Open Air 2020, which had tob e cancelled due to the ongoing pandemic. These are especially good news for metal fans who had already been looking forward to these shows, among them the highly anticipated Wacken debut of the masked US giants Slipknot. Medieval rockers In Extremo will take their acclaimed new record „Kompass zur Sonne“ to the stage, while Sick Of It All will be a highlight for devotees of New York hardcore. German metal veteran Udo Dirkschneider and his band U.D.O. team up with the music corps of the Bundeswehr for an epic show. Sweden’s At The Gates also have prepared something special and will celebrate their melodic death milestone „Slaughter Of The Soul“ live. Legendary alternative rockers New Model Army, crossover sensation Fever 333and Death Angel, masters of thrash, round up the package of returnees. In addition, Black Star Riders, official heirs to Thin Lizzy, are a completely new name in the billing.