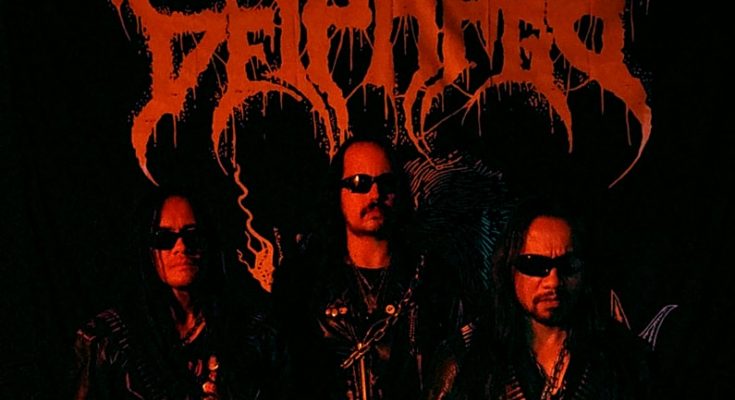 Deiphago are arguably the most violent band on the planet, as well as one of the most envelope-pushing. Over the course of four albums – 2006’s Satanik Eon, 2009’s Filipino Antichrist, 2012’s Satan Alpha Omega, and 2015’s Into the Eye of Satan, the latter three all released by Hells Headbangers – and with a history spanning 30 years, this power-trio have challenged the norms of black metal, death metal, even extreme metal in general, resulting in a catalog that’s unchallenged and untouchable. Quite simply, Deiphago are without peer, and I, The Devil underlines this fact with no uncertainty.

Always pushing themselves, Deiphago teamed up with producer Kurt Ballou (Converge) to record I, The Devil, with mastering handled by Brad Boatright (Audiosiege), and the legendary Joe Petago returns to do the album’s cover art. Featuring eight songs in 40 minutes, I, The Devil sees Deiphago taking their ever-singular “Experimental Hyper-speed Satanic Bestial Metal” down avenues both more violent and more angular. No other nowadays metal band sounds this extreme – extreme violence, extreme progressiveness, extreme EXTREMITY – and I, The Devil shall prove, once again, that Deiphago are truly in a league all their own. If the Colin Marston-produced predecessor Into the Eye of Satan displayed a band aiming for the most atonal and challenging ends of the black/death spectrum, then I, The Devil will prove that Deiphago have crossed their Rubicon – and they’ve left everyone behind, cowering in their conservatism.

“This album is a celebration of our 30 years of existence, a cultivation of all our experiences since the band started in 1989. We have worked hard on this album, and it is the best music we have ever released, filled with dark moods and reeking of destruction. We present to you the essence of pure black metal as it was meant to be like in the early ’90s, when bands didn’t sound the same. This is our magnum opus that will be revered right next to the groundbreaking black metal albums of the early ’90s.”

“This will surpass everything not just in the bestial black/death genre, but the whole black metal scene as a whole. This album stands on its own as diverse and unconventional, filled with monstrous dissonances and intolerable cacophony. It is perfecting the uncontrolled chaos. Kurt Ballou has done a great job as producer, engineer, and mixer, capturing our evil intensity. Normal people will not understand the music, as we have put such a high standard over all the typical trends of today. Beware the release of I, The Devil.”

No empty words here: I, The Devil is twisted, violent genius and avant-garde obliteration simultaneously. It is NOT for normcore metalheads, weekend warriors, or “diehards only” posers; it reverberates with the righteously unorthodox, those who dare to seek beyond the borders of the “sheep in wolf’s clothing” conservatism endemic to underground metal, or simply metal in general. There Deiphago stand, crushing those very borders, and any who would stand in their way. Behold I, The Devil and await the sweet kiss of utter annihilation.

“When you need metal, go to hell!”