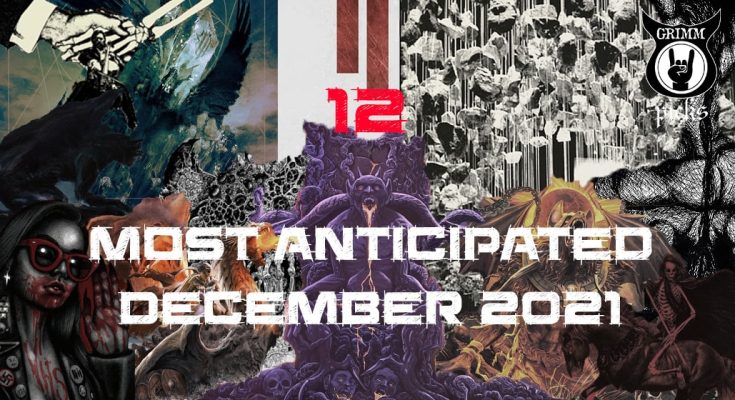 Swedish melodic death/black metal legends Unanimated have been silent for three long years, during the early years of evolution the Swedish quartet maintained the melodic form of the Scandinavian death metal with the nuances of black metal. “Victory In Blood” out via Century Media Records is the band’s fourth album which reflects on the vicious and the melodic spectrum of bands a la Dissection. Unanimated‘s classic line-up offers up blazing guitars, and plenty of memorable hooks, although from the premiered single it seems that Micke Broberg, Johan Bohlin, and Richard Cabeza emphasize blackened viciousness and aggression. Unanimated‘s comeback album will undoubtedly be sensational for fans of Sacramentum and Dissection.

Elder / Kadavar – ‘Eldovar – A Story Of Darkness And Light’

Two beloved bands in the realm of modern day rock music putting their talents together to create something new and unique is always something to look forward to. Combining Kadavar‘s psychedelic hard rock and Elder‘s more atmospheric/progressive psychedelic rock for the project baptized ‘Eldovar – A Story Of Darkness And Light’ is simply too appealing to miss out on. It really turned into a mesmerizing and captivating piece of art that features the best of both worlds and literally feels like you’re drawn into a completely different world through musical storytelling.

Well, this is a relief! Genocide Pact are back at long last. I always get worried whenever I stop hearing from a band. Not that they owe us anything, but it’s pretty rare these days for artists to stay completely quiet for almost four years. These lads from Washington DC, along with the likes of Gatecreeper, Outer Heaven and Tomb Mold, were part of the then underground scene that modernized old school death metal and started the whole trend of caveman riffs which is now so popular. And this is a band that, I feel, got left behind a little despite their undeniable influence. Now bringing us their eponymous third album, I hope they’ll get the recognition they so deserve.

After some minor production delays, Manimal finally unleash the aptly titled ‘Armageddon‘ at the end of this crazy year. The fourth studio album from this Swedish beast seems to be filled to the brim with high energy tracks such as ‘Forged in Metal‘, ‘Burn in Hell‘ and ‘The Inevitable End‘. Manimal make no attempt to hide their obvious influences, and frankly, that’s just fine by me. Fans of Judas Priest, Primal Fear and Dream Evil are going to gobble this up like sweet heavy metal candy.

VHS – I Heard They Suck… Blood

Canadian shredders and cinephiles VHS can not be stopped – not that we would try to stop them – as their upcoming fifth full-length, ‘I Heard They Suck… Blood’, will be the fourth release in as many years. I find myself yet again looking forward to their eclectic mix of thrashing speed, death metal attitude and grindcore silliness. I’m not that familiar with the early work, but I can’t begin to count how many times I’ve listened to 2019’s ‘We’re Gonna Need Some Bigger Riffs‘ and last year’s ‘Gore from Beyond the Stars‘. Both those records were just fantastic. The Ontario trio’s subject matter usually speaks to me on a personal level too, which naturally works in their favour. As a huge sci-fi/horror geek myself, I can’t help but give them extra points for finding fun themes for me to chuckle at. Also be sure to look out for some cool recurring collabs with Trevor Strnad (The Black Dahlia Murder) and Dave Ingram (Benediction, Down Among the Dead Men). My only hope is that the cover art won’t reflect the music too much. I’m still not sure if I love it or hate it as a whole, but I do know that is one ugly drawing of a hand. I much preferred their previous album covers.

When Rage Of Light released their debut full-length ‘Imploder‘ on Napalm Records in 2019, it looked like they were ready to take over the world and explode in the metal scene. Sadly, their mission to do so got halted by the pandemic and eventually Melissa Bonny deciding to part ways with the band, while she had become a quite essential part of their sound. So everyone was really curious where they would be taking it next and how they would bounce back from losing someone like Bonny. And here it is: the aptly titled sophomore full-length ‘Redemption‘ is a new chapter for the band, released independently and featuring the newly recruited vocalist Martyna Halas. And from what we’ve heard of the earlier released singles, they haven’t lost any of their heaviness. On the contrary…

One of the late entries into the genre of death metal of the year 2021 comes from the Danish death metal formation Phrenelith. Taking four full years in honing their craft “Chimaera” is the band’s follow-up album to the debut “Desolate Endscape“. Musically the band has put another crushing material where they channel every formidable riff offering layers of the chunky guitars and grinding double bass. The 30 minutes of this masterwork includes tons of blast beats and cold acoustic guitar passages showing the immense talent of these Danes. “Chimaera” is scheduled for a release date on December 10th via Nuclear Winter Records, and its one of the most anticipated releases of the year.

Finland, the country known for many popular and quality metal bands, has a thriving and expanding metalcore scene as well. One of the forerunners of the exploding modern metalcore scene in the country are most definitely Atlas. Defining their signature sound and aesthetics as “Northcore”, they’ve always had a unique take on the genre. And on ‘Ukko‘ they’re really taking it up a notch. Inspired by Finnish legends, folk music, poetry and the ever-present nature, they enhanced their already gloomy and expansive sound into something truly captivating and epic. A must for not only metalcore fans that are looking for something fresh, but also for people who like the gloomy melancholy of Finnish metal music!

Death metal purveyors Dark Descent Records will unleash the first full-length album “Realms of Exquisite Morbidity” of Texan-based band Malignant Altar. Featuring six mid-tempo tracks in the vein of Suffocation, Cianide, and Bolt Thrower these Texans have a knack for old school riffs as well as old school technicality. Malignant Altar‘s debut is a groovy slab of chunky guitar and fetid atmosphere that deserves all your time if you like your death metal brutal then look no further.

Fear Of Domination is one of the more popular bands in their home country of Finland and rightly so. Their relentless touring and work ethics together with the highly catchy and danceable industrial metal tracks have grown them into a gem that is ready to break through properly beyond the borders of their country. With ‘VI:REVELATION‘ we see them somewhat shifting things around a little bit with what sounds like somewhat harsher, heavier or even maybe more mature music and a completely different look featuring masks and all. This will also be the last album that features the popular Sara Strommer on vocals as Saku‘s trusted vocal companion. It feels like this might actually be their breakout album and pretty much a milestone in the Fear of Domination history.

With their 2020 release ‘Das elfte Gebot‘ these German “mittelalter rock” giants definitely turned some heads, this time even more than before outside of the borders of their country. And especially their cover versions of Ed Sheeran‘s “I See Fire” and Seeed‘s “Ding” (with a hilarious video and featuring the talented Melissa Bonny on guest vocals) opened up quite a couple of doors for Feuerschwanz. They got to do a couple of gigs during 2021, but for a band that is usually a relentless touring machine, there was simply too much time on their hands. So here we are, about a year later with yet another new full-length release under the form of ‘Memento Mori‘! While staying completely true to their signature sound, they yet again are venturing into new musical realms, as they are not the kind of band to sit still or stagnate. The album speaks of epic music about great adventures, battles and heroism, just the right kind of music we all can use after yet another rather shitty year!

Swedish prolific musician and vocalist Jonny Pettersson of (Berzerker Legion, Gods Forsaken, Head For The Dead, etc…) is a true icon among Swedish musicians. On December 31st Swedish death metal legends Wombbath has set a release date for their sixth album “Agma” out via Transcending Obscurity Records. The new album includes sixteen tracks that convey a very different kind of death metal aggression which expands beyond the trademarks of Swedish style. As a result of the visceral compositions “Agma” conveys an impressive mixture of old-school grooves and guttural morbidity that will make it the best release from this iconic band.