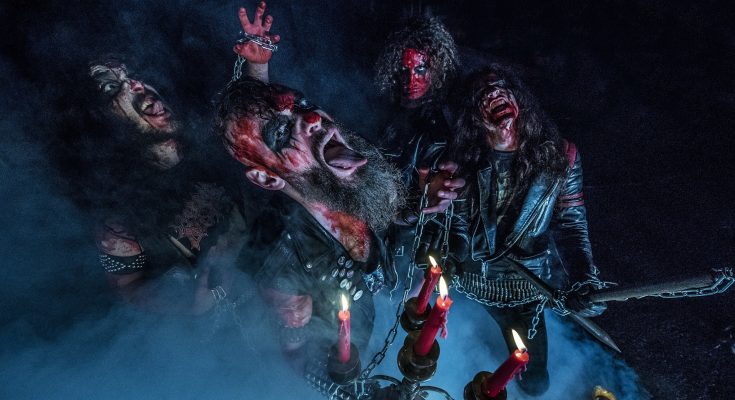 “We are extremely proud to see the upcoming album taking its final twisted form. We have worked tremendously hard to make this a unique output in the overabundance of digitally altered releases. The sonic layers of analog mayhem that have shaped our identity on the first album were molded once again in the Voodoosound Studios, but this time with a clear focus. With the previous experience under our belt, there was far less need for experimenting with all the vintage equipment, and we took the opportunity to include every detail that accentuates the deeper layers of the songs. This brings it as close as possible to the vision that main songwriter KK Ripper and I intended for this LP.”

“The album was recorded in just one week, a very short timespan for an analog recording – where the title song, for instance, uses all 24 tracks on the tape! – and with LV Speedhämmer laying down the drums after only joining the band 1-2 weeks prior to the recordings. It was a turbulent period for the band, dealing with last minute line-up changes and constantly playing live shows during most of the year. But it has paid off – the album lives, it thrives, it breathes with vicious abandon, and it assaults the mind of the listener. One can almost taste the anger, the tenacity, the strength and the perseverance on this. In the face of adversity, the album was constantly playing in our heads, and KK Ripper has just pumped out riff after riff, lead after lead, the way he composed it. I turned my lungs into leather for this and screamed out all my frustrations. And now it is a victory for us to be able to present this full-length effort in its splendid glory.”

“With a sublime mastering by Arthur Rizk, this album seems to be played straight from mount Olympus, and granted both grandeur and destructive power by the thunderbolts of Zeus himself. The album flows from pure speed ‘n’ heavy metal over extreme thrash, to a black/speed/heavy metal hybrid on side B. To accompany our mixture of metal, there was only ever going to be the epic artwork of none other than Kris Verwimp.  To Bütcher, there is simply no better way to use that as the finishing touch for an Osmose release. We couldn’t have been more proud of the result. And the time for absolute vengeance, and our Second Prayer in service to the Godz of Steele, is nigh.”

Preorder info to be announced shortly. Aforementioned cover art and tracklisting are as follows: