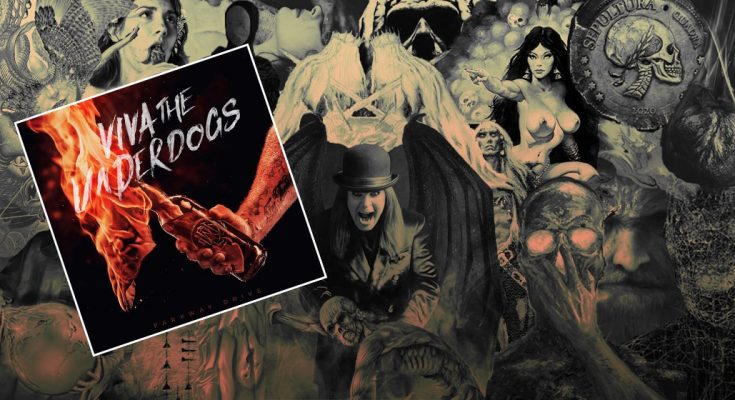 It wasn’t all bad in 2020, although it did seem like that sometimes. An example are these awesome albums that were released this year. The bands couldn’t tour, but I’m sure they will the first moment they can. Enjoy!

Overall a very nice album, but the one song that caught my attention was ‘Noise’. The song tells us on how most people use their electronics every second of the day. We are attached to our phones and whatever. Children walk with their head down through life. Or as the video shows it: people are laying on tables with a helmet with content on our heads. The world around us is destroyed, and we are just laying still watching our lives pass by. We should enjoy the world and it’s nature more, instead of destroying it. You can read the review here.

8. Alestorm – Curse of the Crystal Coconut

I have to be honest with this one: it’s not my favorite, but having listened to it a lot of times by now, I have to say there are some absolute pearls on this one. Like ‘Pirate Metal Drinking Crew’ with the claps and the dog sounds in between and ‘Big Ship Little Ship’ with the lyric ‘CARDBOARD BOX’ that’s just being shouted. Hilarious. Just seeing how much fun Alestorm is having with this makes you laugh and jump around to their songs. Definitely a party album. You can read the review here.

An album I didn’t review. Why? I saw it popping up and only gave it the attention it deserved way later. Luckily on time to make this list. This record is a high energy, melodic metalcore album with the most beautiful harmonics form start to finish. The title track ‘Cannibal’ is a great example of how Bury Tomorrow gets all this emotion into the songs. It’s fast, it’s slow, it’s rough, it’s smooth, … The perfect combination to create this awesome energy while listening to the album or at their live shows.

6. Powerwolf – Best of the Blessed

Not just a ‘Best of’ album, but evidence how much Powerwolf has grown over the years. Just listen to ‘Kiss of the Cobra King’ that was originally released on Powerwolf‘s first album ‘Return in Bloodred’ in 2005. If you compare the two, it’s so different. So many dimensions were added, not only in their music, but also in their live performances. Listen to this if you want to experience a whole new level of power metal. You can read the review here.

This one took me some time to get into. It wasn’t the first album on my list, but it kept lurking around the corner to try and grab my attention. It did grab my attention eventually and I’m so happy it did. This one has humor, badass sunglasses, growls, clean vocals and harmonics between all of the above. This all makes it sound like a 4D album, like you’re in it. The song that hits the hardest is definitely ‘Viral’, where the band looks back on the times before the Covid pandemic. We all miss those times and we stand strong together to go back to those times. Don’t give up hope. You can read the review here.

4. Trivium – What the Dead Man Say

Trivium came with a blast of an album. Typical Trivium sound, but each year they seem to take that sound to the next level. Like I said in my review of the album, this one is like a book. You hear the first notes and you just can’t stop listening. Like a book that’s too exiting to put away. Every time a new Trivium album comes out, there are always high expectations. This one, again, does not disappoint in the slightest bit.

3. All Time Low – Wake Up Sunshine

The summer record of this year. I just get all happy whenever I listen to it. All Time Low released this one in April, during the first Corona wave. They weren’t too happy (like every other band of course) that they couldn’t promote the record the way they wanted to, but they succeeded to promote this record in other creative ways like live streams on Instagram and other platforms. The hit song of this album is definitely ‘Monsters’. There are three versions by now: the original version featuring Blackbear, an acoustic version and a version featuring Demi Lovato, a cooperation the band was looking forward to for a while. This record will definitely be the sunshine of your day once you play it.

A lot of albums that came out this year were called MMXX. Because, of course, its the year 2020 which would be MMXX in Roman numbers. This MMXX EP was by far my favorite. Why? The power, the humor, the skills, … Everything just came together in these 5 songs. Eskimo Callboy reworked some old songs that they released with their new singer Nico Sallach. On top of that there were also three new songs. Eskimo Callboy also did an amazing live stream at Wacken Wold Wide, featuring this new EP and a lot of other songs too. If you’re in for some awesome, full of energy and with a dash of humor metal core album, than this is the one for you. You can read the review here.

This one was an absolute blast for me. I was there when Parkway Drive performed their absolute insane performance as the closing headliner at Wacken Open Air in 2019. Having this experience on a cd is an absolute blast. Especially with the 2020 situation, reliving this experience hit hard. And I can tell you, I absolutely had a party at my place with this live album. Parkway Drive gave it their all, clearly audible on cd when lead singer Winston McCall screams ‘Jump!’ and ‘Up!’. You can hear the bands appreciation in their voices. A very respectful band in both ways. So, if you’re in for a blast of a concert in your living room, whether you were there or not, this is the album you need to have. They also made a movie with the same title featuring this concert at Wacken. You can read the review here.