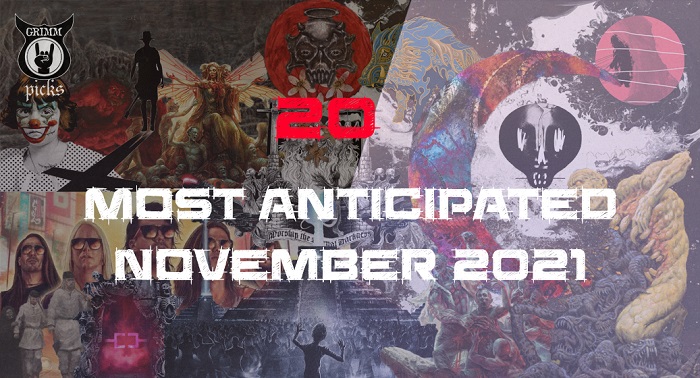 It’s been 3 years since the release of Bullet For My Valentine‘s “Gravity“, and while they seemed to have gained quite a few souls with that album, it was a very polarizing piece of music with its more experimental approach and rather nu metallesque vibes. Now they’re back with their self-titled 7th full-length and it seems they needed to get some frustration, anger and aggression out of their system… Straight from their very first single ‘Knives’ they absolutely blew us away with the heaviest track we’ve heard from these guys in a long time. And the singles following confirmed even more that this is going to be heavy as fuck with a sound that takes elements of almost all their past music while still sounding fresh as hell!

One of Finland’s favorite melodeath outfits is back again! Markus Vanhala‘s Omnium Gatherum is releasing album number 9 with ‘Origin‘ and it’s without a doubt their best to date! While all the signature elements of OG are there, they really stepped it up. From a conversation with Markus we got to know that they basically took the time to really dissect every track they wrote and dropped it in the bin if the quality wasn’t at its absolute peak. That resulted in an absolutely epic piece of melodeath displaying an impressive array of songwriting and musical skills. If you’re a melodeath fan, you don’t want to let this one pass you by!

This Swedish band is part of the Scandinavian led ’80s hard rock revival. Crazy Lixx‘ seventh studio album promises to be another glorious nostalgic love letter to ’80s hair metal, with plenty of catchy choruses, memorable hooks and riffs and big emotive guitar solos. Need some convincing? Just listen to singles like ‘Rise Above‘ or ‘Anthem for America‘.

Profound Lore Records will unleash the sophomore release “Preserved in Torment” from Washington’s death/doom metal act Mortiferum. Since their emergence the quartet clearly manifested the putrid forms of the old school Finnish sound of the early nineties. In span of two years Mortiferum have perfected the cadence which binds the spectral lead guitars, cavernous growls and the dark brooding atmosphere hence providing a much border spectrum. While taking a gradual modification from the first studio album “Disgorged from Psychotic Depths”, the new songs are significantly enhanced by the crushing drum paces the guitars exude unearthly atmosphere. On November 5th, Mortiferum are about to embark on a new journey where they roam the desolated landscapes of death/doom metal.

Chris Dearing‘s streak of utter madness remains uninterrupted as he’s about to drop his sixth independent full-length production in as many years under his alter ego, The Sound that Ends Creation. The mathgrind solo artist’s previous installments have been nothing short of magnificent in their sonic representation of insanity and, judging from the singles he’s already dropped, we’re in for a extension on our subscriptions to the nearest loony bin with the new ‘Boomers, Zoomers, Desperate Coomers‘. Get ready for an intense and nihilistic exercise in pushing your musical boundaries to their uttermost limits.

The Danish outfit Møl is known to set up shop in the realms of “blackgaze” and has gathered quite some fans throughout their almost decade of existence. ‘Diorama’ will be the very first full-length after signing for Nuclear Blast and everything we’ve heard so for is promising us one heck of an album yet again. You might expect a lot of meandering and atmospheric sounds, but from the already released singles, we think we can say that you’ll be in for quite a ride. Take the track ‘Vestige’ for instance: groovy as fuck and absolutely brutal! Møl might end up on quite a couple of “AOTY” lists with this one…

Finnish black metal outfit Darkwoods My Betrothed is a quite legendary one, having been there from the very start of the scene until now, with a couple of breaks along the way. Now they’re back after over a decade of absence and how! With mostly original members, including the official upgrade of Tuomas Holopainen (better known as Nightwish‘s mastermind) from session member to the official keyboardist, some interesting session artists like Kai Hahto (also known from Nightwish) on drums and even the original vocalist Pasi “Emperor Nattasett” Kankkunen back on lead vocals, ‘Angel Of Carnage Unleashed’ is shaping up to be quite the impressive piece of epic Finnish black metal!

International death metal quartet Hyperdontia announced the release date of their forthcoming album “Hideous Entity” on November 12, the first glance on the festering disgust of the album cover the band seems to continue with the cavernous approach. Though “Nexus of Teeth” offered us low guttural growls the precise semi-technical riffs of Mustafa Gürcalioğlu stuck in my head for days. Hyperdontia earned unprecedented efficiency what impressed me the most was the brutal bludgeoning drum beats of Tuna (Sulphurous). “Hideous Entity” has a lot to offer the fans who have waited three years, with this foul air of anticipation prepare to submerge into old school grimy death metal territories.

It has been seven years since Exodus released their critically acclaimed tenth album ‘Blood In, Blood Out’ back in October 2014. Production on a follow-up record kept being pushed back, mainly due to guitarist Gary Holt‘s commitment to Slayer‘s farewell tour. Now the pioneers of Bay Area thrash metal are finally back with ‘Persona Non Grata’! The new album, once again released through Nuclear Blast, will touch upon themes of modern societal disgust and degradation. I ask you: is there a better way to tackle these themes, than with plenty of aggressive shredding, relentless percussive violence, face-melting guitar solos and Steve “Zetro” Souza‘s rage-filled vocals?

Aephanemer – A Dream Of Wilderness

A couple of years ago, we happily discovered the French outfit Aephanemer, who delivered an impressive blend of symphonic and melodic death metal in a scale that reached epic levels! And with their upcoming 3rd full-length release, we can expect more of the same. The singles they already released bring that same awesome mix of captivating songwriting, engaging melodies and symphonic that at times give the tracks almost a folky undertone. Just check it out for yourself and be ready to be whisked away on their “Dream of Wilderness”!