Home Black Metal Most anticipated releases of May 2021 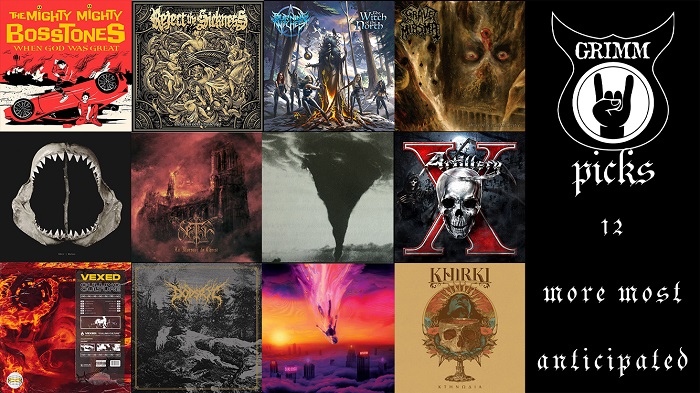 One of the bands that laid the foundations of the French black metal scene in the mid and late nineties is the band Seth. The forthcoming album La Morsure du Christ is one of the most anticipated album by this French sextet, especially after 7 years of as good as nothing. The premiered single revealed significant hints of the old melodic flair of first album ‘Les Blessures de l’âme’. Although the previous albums somehow sounded different the fifth outing promises to deliver flawlessly rhythmic inspiration and the theatrical style from the nineties black metal majesty.

The band popped up on our radar with their single Bystander. A vibe and tone that sounds like Infected Rain and Skindred had a baby definitely caught our attention. If all songs are this catchy and driven, this might be the breakthrough album for this band. The other singles sounded very promising as well, some more poppy harking to vocalist Skye‘s past as a pop singer, some dark and heavy… Let’s wait and see how more popular Sumo Cyco will be getting!

The veterans from Denmark are back with their brand of old-school thrash metal. The first single (‘In Thrash We Trust’) has been stuck in our heads for the past few weeks now. This tenth studio album will be the first without Artillery‘s guitarist and founding member Morten Stützer, who passed away in 2019. Luckily, the surviving band members decided to continue performing in his honor.

The Mighty Mighty Bosstones – ‘When God Was Great’

Summer is approaching, so what could be better as a soundtrack to go along with that than the upbeat ska punk from Boston-based The Mighty Mighty Bosstones? With ‘When God Was Great’ we get the 11th full-length since they started off in the eighties and the very first on Hellcat Records. And if you caught some of the singles already, you know what we’re up for: a blissful mix of ska and (hardcore) punk, uplifting for your spirit while still tackling some pretty hefty topics at times. Now, lets get skanking!

The release of the long-awaited new album of London trio Grave Miasma is finally drawing close. Though many have anticipated their return, Abyss of Wrathful Deities feels like it was recorded in the catacombs of ancient ruins. This is yet another dexterous record that proves the impeccable craft of the band. Continuing to spew forth the venom of the malignant death metal, embossed with the seal of occultism, the band arranged eight demonic overtures led by frenzied drumming and demonic primordial death metal growls.

Seemingly coming out of nowhere, the Galician duo Bala will absolutely kick some serious ass! Having been around for a good 5 years, I’m dumbfounded that I haven’t come across them earlier. Because the infectious and explosive mix of stoner, punk and grunge is absolutely killer. My thanks to Century Media for signing these 2 women who will more than likely take over the world in no time with their bombshells of songs.

Jess And The Ancient Ones – ‘Vertigo’

Mighty Finland with its endless talented artists, musicians and bands… One of the very first times we ended up in Helsinki for Tuska Open Air in 2016, we got to experience the mesmerizing entity that is Jess and The Ancient Ones live. And ever since we’ve kept a close eye on one of Finland’s favorite psych rockers. With their last album ‘The Horse and Other Weird Tales‘, they turned many more heads towards them and now their gearing up to release album number 4 with ‘Vertigo’. And if we can go on the singles they released already, the quality of the music is up there again, while going back a bit to that raw sound from their early days… something to get truly excited about!

Another nice surprise that passed us by a while back, is the Greek Khirki. The heavy rock ‘n’ rollers mix in a decent amount of metal and folk from their heritage, creating a sound that is somewhat reminiscent of bands like Mastodon, High On Fire and Kvelertak at times. ‘Κτηνωδία‘ promises to be an absolute banger of an album and one that we can advice you to not miss out on when it gets out later in May!

Lately there is a surge of amazing young bands that have a very modern approach and style, mixing different styles and influences together that absolutely crush. And more than once, these bands are lead by an impressive vocal section that shows that women in music can be more than just “the voice of an angel” and are rooted in societal issues and contemporary topics. Napalm Records seems to be somewhat on a roll in this, managing to pick out bands that actually explode pretty quickly after signing with them. The UK-based Vexed is one of the latest in this series. They manage to combine heavy grooves with at touch of prog and the aggressiveness of a proper hardcore/extreme metal band. Their long-awaited debut album ‘Culling Culture’ will come in with a bang, get ready for it!

Let’s quickly take a step into the underground here. Dödsrit have been on my constant watch list since I discovered their 2018 masterpiece ‘Spirit Crusher‘. I honestly expected their next offering to drop last year since the recording process was over in September but, because the band suffered a few unfortunate delays, it’s set for release at the end of this month. Apparently the copy only made it to the pressing plant in November and had been sitting there for a while with little to no budge in sight. But their troubles are finally over and our patience is rewarded. At least I know that when my allergies start acting up again, I’ll have a new blackened crust album to soothe the discomfort.

Burning Witches – ‘The Witch of the North’

What sorcery is this? It’s hardly been a year since Burning Witches enchanted us with their third studio album ‘Dance With the Devil’. The newly added Larissa Ernst as replacement for Sonia on guitars, must have really lit a fire under them, already coming with another full-length this fast! This coven mixes ingredients of 80s heavy metal, with a few drops of power metal to brew a concoction of bewitching metal magic. For fans of Judas Priest, Doro and Huntress.

Reject The Sickness – ‘While Our World Dissolves’

A new album from the Belgian death/thrash outfit Reject The Sickness is always a good thing to behold. Especially if you’re looking to break your neck any time soon… ‘While Our World Dissolves’ is the first release with the new line-up and looking at the singles we already got blasted in our faces, this will be yet another banger and as usual, some pretty heavy themes featured in every track. Back are also those proper melodics infused throughout their songs instead of just ripping our faces off relentlessly (not saying that won’t be happening anyway). Sounds like these guys are ready to possibly expand beyond the borders of their tiny country to blast from speakers all over the world… check it out for sure!