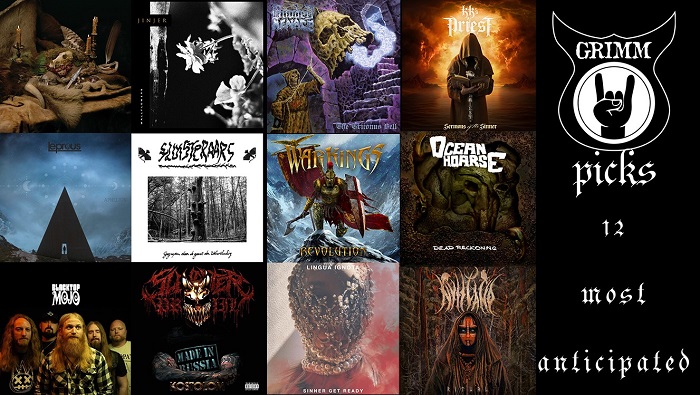 Nytt Land is a project that we’ve been holding close to our heart for quite a while. Some years ago, we had the honor for these people to grace the stage at our venue in Belgium and last year, they highly impressed us with their full-length ‘CVLT‘ (for the review go here). In the mean time, they’ve been picked up by Napalm Records and are now about to release a brand new full-length again already with ‘Ritual‘! And from what we’ve seen and heard already of the album, the name tells you as good as everything you need to know… As usual, you can expect some gorgeous and mesmerizing folk music inspired by their Siberian heritage, including throat singing, though this time maybe going even more for their roots, delivering the perfect soundtrack for any of your pagan needs.

Some years ago, we discovered the enigmatic entity that is Lingua Ignota when she had a performance at Blow Up Festival in Helsinki (check the report out here). Not knowing what to expect, we were blown away by that small figure who belted out bone chilling screams and sang haunting lines while also physically completely throwing herself into a piece of art that went way beyond the scope of music or “just” a concert. Since then she’s worked with prominent artists and bands like Colin from Amenra, Full of Hell,… every time creating an absolute unique piece of sonic art. After the much lauded ‘Caligula‘ (read our review here), she’s back with ‘Sinner Get Ready‘ and after hearing the couple of tracks she released already, we’re still not sure what to expect or think. One thing is sure: it’ll be unique and an absolute piece of art centered around her amazing voice, that’ll take you on a roller-coaster of emotions.

Deathcore outfit Slaughter to Prevail, their iconic demon masks and vocalist Alex Terrible have become somewhat of a thing on the internet. There have been a bunch of reaction videos on their songs and Alex Terrible is quite well known for his cover songs where he brings his deep growls and demonic vocal exertions to pop songs and others. That doesn’t take away one bit of the talent they have to combine headbang inducing riffs and catchy tracks with some of the most extreme music you can find. After hearing the first 2 singles ‘Baba Yaga‘ and ‘Zavali Ebalo‘, we know we’re in for one hell of a crushing album again with the upcoming ‘Kostolom‘!

Blacktop Mojo has been stirring up the US rock scene for the past couple of years, steadily growing out to be a highly popular band. And even though they’ve managed to capture quite the audience and fan base, they’ve stayed down to earth kind of people, still showing up at surprise acoustic shows in the streets and helping out people when they need it the most. With their self released self-titled new full-length, they’re ready to take over the world with their heartfelt, bluesy rock with a Southern touch and a (post-)grunge vibe. These fellas are shaping up to be one of the great ones in the so called “New Wave of Classic Rock” scene and we’re looking forward to see how far this album will take them!

It seems there’s no stopping this belligerent quartet comprised of a Roman Tribune, a wild Viking, a noble Crusader and a martial Spartan. Barely one year after their sophomore effort, the Warkings return with their brand of cheesy but oh so catchy power metal. With songs inspired by epic movies such as ‘300‘ and ‘Spartacus‘. Hopefully their new album will once again feature some guest vocals from Warkings‘ frequent collaborator, The Queen of the Damned.

KK’s Priest – Sermons of the Sinner

After an extended hiatus, ‘Sermons of the Sinner‘ marks the return of Judas Priest‘s co-founder and former guitarist K.K. Downing with KK’s Priest. While it is unfortunate that there’s such bad blood now between K.K. Downing and the remaining members of Judas Priest after so many decades of heavy metal history, it’s also nice to see that K.K. Downing‘s heavy metal ride is far from over. He even managed to snag former Judas Priest and Iced Earth vocalist Tim “Ripper” Owens for his new band. This basically means that we now get to experience two separate Priest bands, as is demonstrated in the album’s epic first single ‘Hellfire Thunderbolt‘.

The mystical weavers of atmospheric black metal Wolves In The Throne Room finally break the long silence as they return once again with their newest album “Primordial Arcana”. Resembling the many phases of the moon the music of WITTR has deepened with age, building dark aesthetics in a class of their own. “Primordial Arcana” sprawl with epic majesty and raw black metal that is beautifully woven with synth passages, soothing rhythm, and dark mystical poetry that grabs back to their roots. Prepare yourself to embark on a new hypnotic journey into the archaic woodlands of the desolated forest.

After years of grinding away independently and crushing gig after gig, including a short stint as support band for Marko Hietala‘s solo European tour, it’s time for Oceanhoarse to really start taking over the world outside of Finland! They signed to the quickly growing independent metal label Noble Demon, bringing them to the same roster as their countrymates of Dawn of Solace, Humavoid, Kaunis Kuolematon, Red Moon Architect and Mercury Circle for the release of their very first full-length album ‘Dead Reckoning’! As one of the forerunners of the “New Wave of Finnish Heavy Metal”, you can expect straightforward, yet unique sounding heavy metal rooted in the traditions of a country that has brought forth some amazing metal bands, coming from highly experienced musicians from the Finnish scene! A release that you shouldn’t miss out on!

Jinjer has been soaring unto great heights and reached impressive amounts of people the past years. The band has been on a role for a while now and don’t seem inclined to slow down one bit. ‘Wallflowers‘ is their 4th full-length, coming in 2 years after the well received ‘Macro‘ album (for our review go here). And looking at the 2 singles that have been released already, they don’t seem to be into rehashing what worked before, staying true to their talented and experimental self. Just compare how different ‘Vortex‘ sounds compared to ‘Mediator‘, while still maintaining that signature Jinjer sound with ease. As we already stated before back in 2016 with the release of ‘King of Everything‘ (for our review go here), Jinjer is a band that is meant for greatness and is giving the future of metal music something to really look forward to!

The sixth chapter “The Tritonus Bell” of Finland’s death/doom quartet Hooded Menace is yet the most monolithic piece of crushing metal. Since its formation guitarist and former vocalist, Lasse Pyykkö helmed the craft. This time the band uncovers elements of heavy metal to inject the dynamics into the tempos as they add new characteristics, while still maintaining the signature sound of the band. Hooded Menace ensures a new direction and yet they are still able to bring the songs on a visceral level. If you crave for some gloomy rhythm and monstrous death/doom then do not miss the anticipated release from the these Finnish masters!

Aaaah, Leprous. These guys have gone through quite the journey and changes in their now 20 year existence. Going from being known as the live band for the legendary Ihsahn, to stepping away from that gig to come forward as a proper entity on their own, at first releasing more metal focused albums with always a progressive nature, they gradually rolled into a more prog/art rock sound with heaps of pop catchiness and melodies. They’re one of those bands that even though they used to be pretty heavy, most fans just stick with them throughout every sound change because of the pure musicality, sheer talent of the guys and heartfelt emotion they manage to bring across with their music. Previous album ‘Pitfalls‘ charted higher than ever before in certain countries (read our review here) and we’re expecting nothing less from this little gem that will be ‘Aphelion‘!

Last year, the Dutch black metal outfit Fluisteraars simply blew us away with ‘Bloem‘ (read our review here), an album saturated with compelling melodies that made us instantly fall in adoration with their atmospheric black metal sound. Much to our surprise (and excitement), about a year and a half after that release, they are already back with yet another album. ‘Gegrepen door de Geest der Zielsontluiking’ (loosely translated ‘Gripped by the Spirit of Soul Blossoming’) will most likely be yet another gripping and bone-chilling adventure in to the realm of atmospheric black metal. An adventure we can hardly wait for…