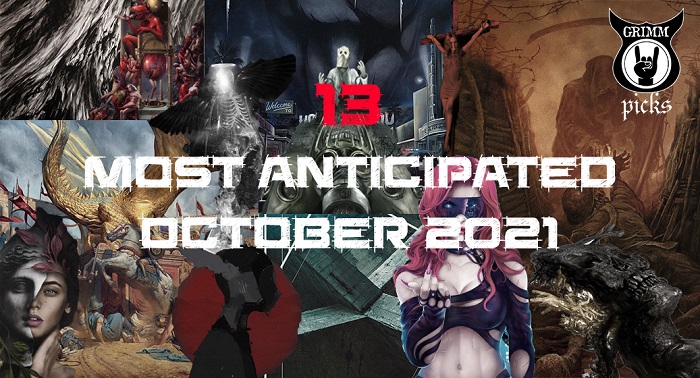 Grindcore is just the best and Full of Hell are one of the many reasons why. Their upcoming record is one of my most anticipated albums of the year with good reason. The US grind quartet are known for their experimentation with sound, and I’m eager to hear what unholy creations they’ve got in store for us this time. They’ve been around for a while but it wasn’t until 2017’s ‘Trumpeting Ecstacy’ that they reached the level of intensity they are now known for. That one and 2019’s ‘Weeping Choir’ were instant classics in the genre and I expect no less from ‘Garden of Burning Apparitions’. Prepare yourself because your musical boundaries are about to be tested once again.

Trivium – In The Court Of The Dragon

Trivium has been rising stars for quite a while now, but with their 2 most recent releases, it seems they’ve really have a one way trip to the top. On ‘The Sin and the Sentence’ they showed they’re the epitome of modern metal, combining a high level of catchiness and a never before heard brutality. While last year’s ‘What the Dead Men Say’ showed a songwriting sensibility that went beyond what we expected from them, adding an extra layer of progressiveness to it all that really impressed. So I guess it’s an understatement to say that we’re looking forward to see and hear what they have in store for us on ‘In The Court Of The Dragon’! Going on the impressive first video for the title track, it’s going to be quite the trip yet again.

Mercury Circle is somewhat of a Finnish supergroup that can boasts having (former) members of Swallow the Sun, Children of Bodom, Sleep of Monsters and Iconcrash to name a few and has already released a selection of highly intriguing songs since last year. It seems like not one of their tracks sound exactly the same creating a unique and diverse blend of dark rock infused with electrifying synth wave and slow, epic doom. On the one hand we got goth’n’roll vibes, on the other hand they already offered more atmospheric and gloomy trips as well. After last year’s EP, the ‘Killing Moons’ full-length album of these talented musicians is all we need to start of the autumn season well.

Metalcore (or rather horrorcore) outfit Ice Nine Kills might be one of the most unique and captivating bands in the scene. The combination of songwriting skills that bangs out one after the other highly catchy banger with their dedication to anything and all that is horror cinematography, has almost no comparison. Since the release of ‘The Silver Scream’ in 2018, they’ve been rising stars and gained heaps of souls all over the world. Every track they release and every video they create honors a certain horror franchise, character or movie and it’s done with such obvious love for the movie genre that it could convince anyone who comes across them. Just look at the first singles they released already, putting the focus on Patrick Bateman (American Psycho), Chucky (Child’s Play) and The Umbrella Company (Resident Evil) and we absolutely loved it! ‘The Silver Scream 2: Welcome to Horrorwood’ will really be something else again!

The discovery of the Belgian progressive/post-metal outfit Hippotraktor a couple of months back was a very welcome one. While they have been around for a bit already with an EP release in 2018, they recently added singer/percussionist Stefan De Graef from Psychonaut and guitarist/singer Sander Rom from L’Itch to their ranks and it definitely didn’t hurt them. On ‘Meridian‘ you can expect a mix of big, catchy riffs, relentless yet groovy complexity and an absolute intensity that will blow you away. Fans of Gojira, Meshuggah, Periphery, Psychonaut and others will find a lot of enjoyment in this little gem!

One of the quickest rising stars in the Finnish melodeath scene the past couple of years is most definitely Bloodred Hourglass. While they made some pretty awesome music earlier on, with the release of ‘Godsend‘ in 2019, they caught many people by surprise. They really took the quality of their music to a next level and could easily match with some of the popular international acts that are around with tracks like ‘Waves of Black’ and ‘The Unfinished Story’. And it seems like they’re another band for which the way up is the only way to go with ‘Your Highness’, looking at the first singles ‘Drag Me The Rain’, ‘Nightmares are Dreams Too’ and ‘Kings & Queens’. They very much continue their path towards greatness and will conquer the world in no time like this!

Yes! They’re back! In 2016-2017, the guys of Zornheym surprised us with their debut album built around the concept of the Zornheim mental institute and its weird and intriguing inhabitants. They built a creepy world to escape to, where every track stood for another Zornheim patient and the theatrical/symphonic kind of black metal was the perfect soundtrack. Complete with a graphic novel depicting the stories they were trying to bring across through the songs, this Swedish band formed by former Dark Funeral member Zorn stuck out among the many other releases that year and can easily be placed besides contemporary favorites like the horror metallists of Carach Angren. They also impressed live when playing a show at our JH Asgaard venue back then. Now they signed with the by us beloved Noble Demon Records to release their sophomore full-length ‘The Zornheim Sleep Experiment’, of which you can expect more of the same kind of epic and creepy symphonic black/death metal like before, including another graphic novel to go along with the album, that will be released some time later than the official album release!

I can only think of few death metal bands whose music is based on war themes, bands such as Bolt Thrower, Hail of Bullets, and Memoriam were the first to tackle this style. But the Ukrainian blackened death/doom metal brigade 1914 are quite different when it comes to this kind of category. “Where Fear and Weapons Meet” is the third saga of war anthems that emulates the glorious years of Bolt Thrower, 1914’s idiosyncrasy has a unique flair for writing crushing death/doom metal songs. If you have somehow missed their previous album “The Blind Leading The Blind” then make sure to check out their third output. The Ukrainian quintet expands their musical foray into the cold and the grim territories of raw black metal, a very much anticipated autumn release!

Cradle Of Filth – ‘Existence Is Futile’

British symphonic/gothic metal act Cradle of Filth are set to release their fifteenth album. Following a slight change in line-up and the success of their latest albums “Hammer of The Witches”, and “Cryptoriana – The Seductiveness of Decay”, the new album descends to the deep regions of the netherworld. “Existence Is Futile” serves a morbid and gothic concoction and melds multi-layered song structure and haunting vocals provided by Dani Filth. Cradle of Filth once again draws inspiration from the worlds of horror and with an impeccable artistic creativity, the outfit presents Anabelle Iratni as the new keyboardist. The twelve new songs are ultimately thrilling brimming with symphonic spectacles ebbing through the choruses with old-fashioned NWOBHM-based melodies, the excitement and anticipation which these Filths bring hasn’t been this real!

Everyone’s favourite Canadian tech death ensemble finally returns to once more to disrupt the very fabric of space and time. I’m sure I’m not the only one wondering how Archspire could possibly top 2017’s critically acclaimed ‘Relentless Mutation’, but if the singles we’ve heard so far are any indication they’re well on their way to ending up on everyone’s ‘best of 2021’ lists. I fully expect these guys to show off a level of musicianship we haven’t seen or heard before.

The Beast in Black is back! After their first two powerful records, ‘Berserker‘ (2017) and ‘From Hell with Love‘ (2019), ‘Dark Connection‘ seems to be a bit of a thematically departure for the band. This time the Beast is sinking its teeth into sci-fi cyberpunk. Drawing inspiration from anime such as ‘Battle Angel Alita’ and ‘Armitage III’, but also Ridley Scott’s sci-fi classic ‘Blade Runner’. The band is also expanding its storytelling skills, with an ambitious music video for the album’s first single ‘Moonlight Rendezvous’.

This will be the longest we’ve ever had to wait for a new Be’lakor album. By their music alone it would be hard to guess these lads hail from Down Under since they play a melodeath that sounds rather close to what you’d hear from Scandinavian peers. Anyway, their last record, 2016’s ‘Vessels‘, is still one of my go-to records on a depressing, rainy day. I’m not looking forward to feeling blue again, but I am however looking forward to their upcoming ‘Coherence‘. May it give me as much pleasure and solace as previous records have.

Few modern bands have a better grasp on how 70s occult rock is supposed to sound than Lucifer. Especially since multi-instrumentalist Nicke Andersson joined them back in 2017. Both records they put out since then have been nothing short of magnificent and a literal blast from the past with each installment, so I don’t see why the upcoming ‘Lucifer IV‘ should not keep the nostalgic streak going. I can’t wait to have Johanna sing to me about death, hell and witches this close to Halloween. Should make for an interesting ambiance.